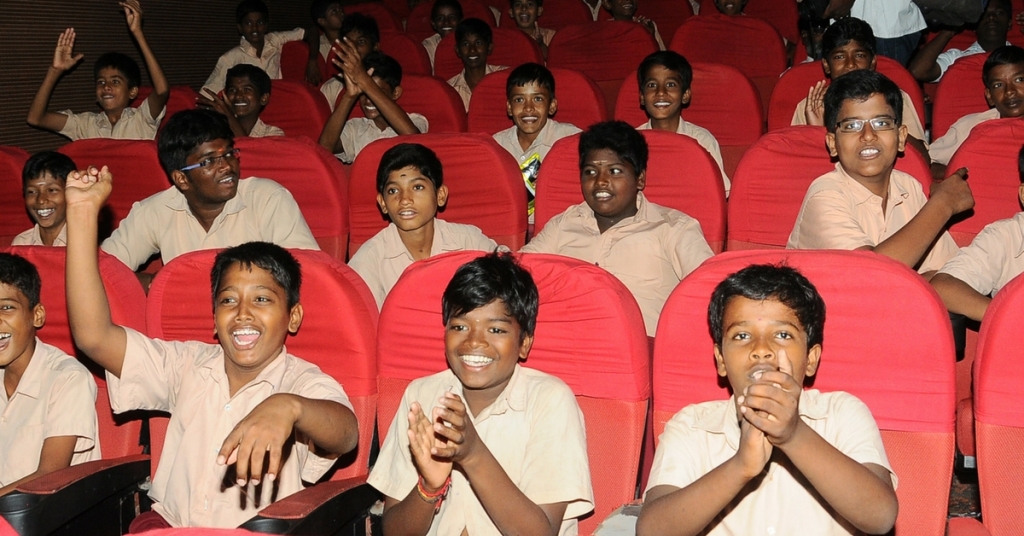 After many successful film festivals, Children’s Film Society of India has now launched Film Bonanza that reaches out to young audiences in smaller cities, towns and rural areas.

Movie buffs are likely to recognise Children’s Film Society of India instantly. After all, countless Indians have grown up watching movies produced by CFSI. The body also organises spectacular film festivals, like ICFFI, an international event held every two years in Hyderabad since 1979.

Dr Shravan Kumar, CEO of CFSI has been instrumental in elevating the curation standard of festival and also initiated programmes to spread the outreach beyond those who were able to attend the week-long ICFFI. “To take our collection of films to children across the country, we started the National Children’s Film Festival (NCFF) in 2014,” he says. “This helped push our Indian filmmakers to up the level of visual content for children.”

NCFF was hosted in 2014 in Delhi and in Jaipur in 2016 and also included scripting, writing and animation workshops for children. It also led the team towards broadening their horizons. “We realised our festivals must travel to different locations where these films are needed most, to educate, entertain and help (children) see the world outside.”

Thus CFSI launched Film Bonanza, a travelling festival that has so far covered 20 locations, showcasing 51 movies to over 8 lakh children.

An ambitious project, the Film Bonanzas travels to Tier II and II cities, as well as remote districts and villages, showcasing around 20 movies during each leg of the festival. With a collection of around 250 movies in its repertoire, CFSI is emphasizing on dubbing to increase the reach of movies in a linguistically diverse country. Some movies have been dubbed in as many as 13 languages.

The CFSI team keeps local language, cultural sensitivities and relevant plot in mind during curation. “In Northeast, we focus on showcasing stories that have themes on bio-diversity and cultural pluralisation,” says Dr Shravan. “Gauru, a CFSI produced film about a shepherd boy from rural Rajasthan who struggles to fulfil the wish of his grandmother, holds a special place among children of Rajasthan as they can connect to the story better.”

He adds, “Movies based on rural life and shot in rustic setting strike a special chord among children from rural areas.”

You might also like: When India Made Its First Major Animation Movie With a Little Help From a Disney Expert

Aiming to expose children in India to the lifestyles and way of expressions of children from different parts of the world, CFSI has also acquired right to 10 films which they plan to dub in Indian languages soon.

Aiming to introduce children to the art of filmmaking, CFSI also holds workshops during these festivals.

“We create a platform for children to interact with noted film makers on the technicalities of making a movie. It encourages creativity and opens their minds to education,” says Kumar. Director Ashok Kaul and animation expert Dhvani Desai are among prominent film professionals who have conducted these workshops.

The success of the first phase of the festival has encouraged Dr Shravan and his team to take their next steps. During 2017-18, the team has a target to cover every district of the country.

“Next on our list—33 districts in Gujarat and the border districts of Kashmir to be covered in the next 3 months. We are looking at covering a total of 600 districts and towns.”

The CFSI team is also emphasizing on technology to expand their reach. The body has launched a mobile app with list of 100 films to choose from. The list of movies is also available on the Department of Information & Broadcasting website. Children or schools can select movies they want to watch and notify CFSI. The list of movies thus selected will be screened during the Film Bonanza week.

The challenges of undertaking a travelling event on such a grand scale can be challenging, particularly in rural areas and remotely connected locations.

Dr Shravan cites examples from North-east and rural areas, where the lack of theatres can pose make it difficult to recreate the cinematic impact. “We have even shown movies in large classrooms and community centres through LCD projectors,” he adds.

The team is seeking support to expand its reach. “Sponsorships will help us take children’s movies in a big way to reach every corner of our country,” he says. Following their social media pages can help spread their word too.

Dr Shravan admits that fearing return on investments, filmmakers can be apprehensive about children’s movies. “Our efforts—holding film festivals and acquiring rights to children’s movies made by international filmmakers—has encouraged many filmmakers to come forward,” he says. “For example, Purple Pebble Pictures got in touch with me and is making three films. Other filmmakers too have evinced interest in making children’s films.”

With the scenario changing, Dr Shravan emphasises the need for content on both traditional and modern mediums that is suitable for a young audience.

Dr Shravan (centre) with students and teachers in Gangtok

“We should create quality content and make options available based on what would engage them,” he says. “This also creates the possibility for improving the child’s creativity on visual media.”

As it continues on the next stage of Film Bonanza, CFSI is gearing up to showcasing films for children, by children. In addition to films produced by CFSI, movies made by kids under the ‘Little Directors’ concept that gained entry in the 18th and 19th Golden Elephant will also be screened.

You might also like: These 10 Foreign Films Can Entertain, Enlighten & Educate Your Teenagers in More Ways Than One

In North East and Jammu, participants were encouraged to make one-minute movies after the workshop; the most creative ones will be invited for the “Little Director” section of The Golden Elephant in November.

Dr Shravan hopes that mobile technology will empower young filmmakers around the country to make their own films. “Children will be able to create and upload short films on this platform and narrate stories straight from their heart.”

For more information on CFSI, head to their website. You can download the CFSI app for Android devices here.