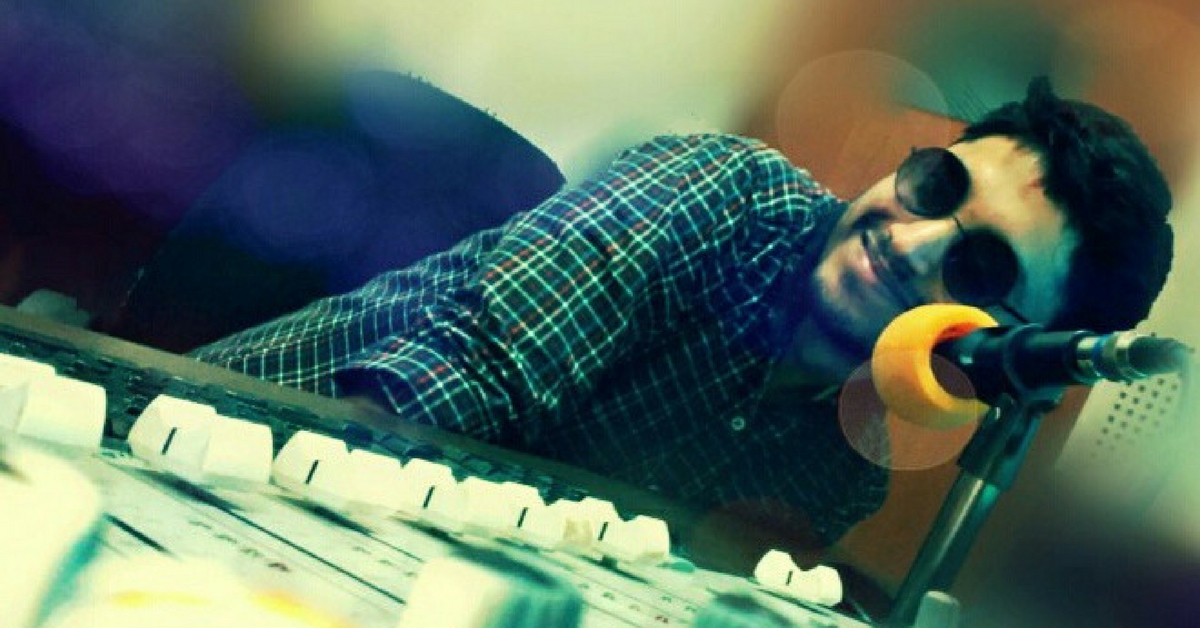 Community radio may not be the most mainstream method of connecting with the masses, but it certainly is effective. Abhishek Shetty of Radio Sarang, Mangalore is proof of that!

For all who chose the former option, we present Abhishek Shetty, a Program Director and RJ at Radio Sarang, the most reputed community radio in India.

Community radio is a concept that is not as well-known as other forms of commercial media, but is nevertheless making a huge impact. The sole purpose of its formation and functioning is the development of the community it operates in. Radio Sarang is based in Mangalore, and is serving its purpose to the fullest under the effective management of Abhishek Shetty.

As a student of journalism, Abhishek Shetty had always wanted to be a part of the visual media field. Thankfully, he found his way to Radio Sarang after a couple of other jobs, and there was no turning back.

When asked what keeps him motivated to keep working in a mass media field which is neither as commercial nor as glamorous as the rest, Abhishek Shetty says that he is actually making a positive impact on society, and that this has to be one of the noblest professions there is.

Abhishek began live radio shows at Sarang after he joined, which was a massive step for community radio. He says that the response was way more enthralling than expected. What made the responses special was that the people who called in on his shows were from all kinds of backgrounds, and from the remotest areas of coastal Karnataka – fishermen, farmers, housewives, and a number of differently abled people.

For five years, Abhishek has been integrating them into his shows in different ways, and they say that he has given them a larger purpose. They consider his voice as one of their own, and we believe there can be no greater accomplishment for a media professional than that.

An unknown voice on the radio becomes familiar and soon becomes one among us, only if we are able to connect to what it says. Abhishek Shetty connects to his listeners through the ultimate aim of community radio – promoting local culture.

The folklore and culture of coastal Karnataka is an immense topic, and Abhishek leaves no stone unturned when it comes to promoting it. His techniques of creating awareness about local culture and generating interest in them include broadcasting programmes that focus on these cultures, and interviewing people in connection with them.

Every day, a different person is invited to Abhishek’s studio, each an unsung hero and an achiever in their area. The listeners are also provided with an open platform to interact, and Abhishek says that his listeners never fail him when it comes to responding to the shows.

Abhishek Shetty has also won two national awards for the ‘Best Promotion of Local Culture’ through community radio. He says that this is the biggest accomplishment of his life – the feeling of having given more purpose to the lives of his listeners, and doing his best to promote the culture that he hails from.

Abhishek Shetty – Up Close And Personal

“The sky is the limit,” is what Abhishek Shetty believes. He follows his passion for anchoring and script writing alongside shows on Sarang. A well-known face (not just voice) in Mangalore, Abhishek says that his life is a celebration. He never says no to a new experiment or idea, and that is what makes him what he is. Formerly a news reader, he thankfully didn’t stay one—it would have been like Virat Kohli commentating rather than playing.

Abhishek didn’t belong at a place that presented facts and figures. He belongs where he can develop and execute creative ideas. Abhishek has been serving justice to the concept of community radio with his team at St. Aloysius College, Mangalore for five years.

One could easily dismiss Abhishek as a simple youngster lost in his thoughts. But the thoughts that keep him engaged all day long make Radio Sarang one of the country’s best community radios.

For anyone who steps into his studio, Abhishek Shetty transforms into a beautiful teacher and friend. He imparts the ideals of community radio to whoever approaches him. Thus, he makes a larger impact on the community’s development and promotes local culture. Indeed, Abhishek is as simple as can be, yet as effective as a media professional.