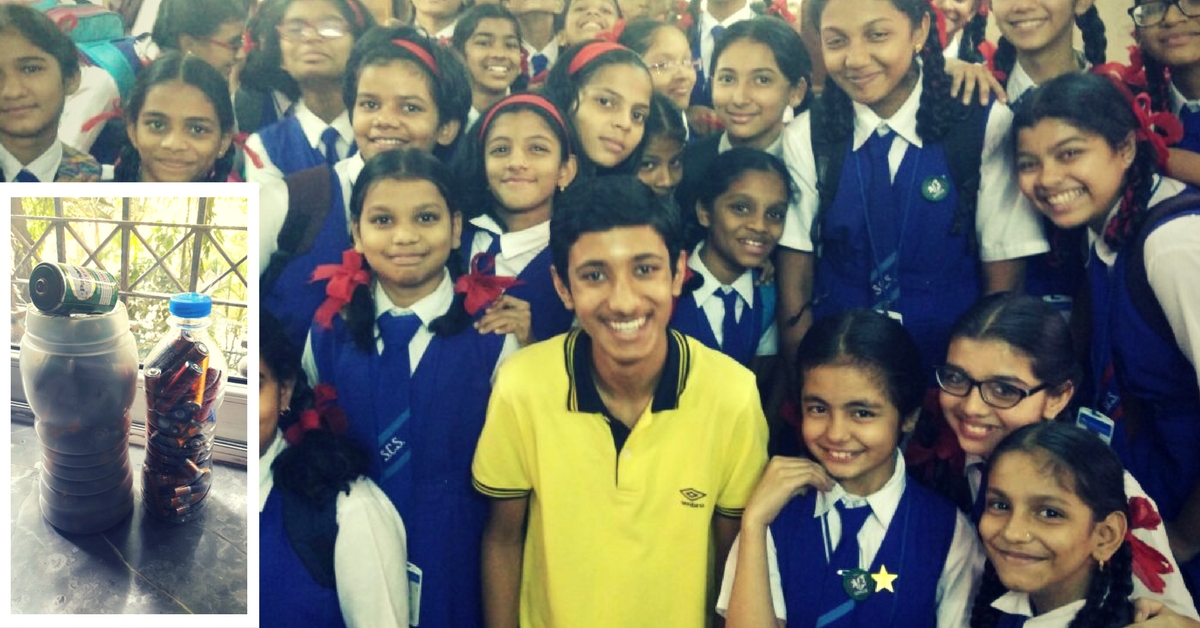 Two years ago when 15-year-old Mumbaikar Nishant Jain got bronchitis as a result of a dump-yard fire, an idea lit from within – he was going to ensure other kids would not suffer similar consequences. The dumpyard was near his house and while the fire had initially been a small one, due to the presence of e-waste and batteries, the fire spread and polluted the air in the neighbourhood. When Nishant fell sick, he realised he wanted to make it his mission to prevent other children from falling sick like he did.

True to his own word since that time, he has successfully collected 350 kg of batteries and e-waste to ensure they are recycled and disposed of in an eco-friendly manner.

“One day after I had gotten sick and recovered, I was about to chuck some batteries in the dustbin. But the batteries themselves had a cautionary warning against doing that. So, I went on the internet and did some research and found out that you are not supposed to do that. Batteries tend to explode in the heat and that’s why the fire in my neighbouring junkyard had escalated so much,” explains Nishant.

Armed with this new information, he went to his friends and family and asked them if they knew that it was dangerous to dispose of batteries along with the other trash and found to his surprise that no had a clue. It was at this time that he decided to take matters into his own hands and start collecting batteries at home and at his school. He spoke to his classmates and his school’s faculty and started a collection by himself. But he wanted to scale up and make it bigger.

And it was Amitabh Bachchan who came to his rescue.

“I was watching some television show in which Amitabh Bachchan was interviewing people from an NGO called Children’s Movement For Civic Awareness (CMCA). The NGO had helped a girl build toilets in her village and I thought I could reach out to them for help. With their assistance, I am now working with 13 schools in collecting batteries and e-waste,” notes Nishant.

You may also like: Thanks to This NGO, There’s Now a Forest in the Middle of the Concrete City of Gurgaon

The internet often came to Nishant’s rescue whenever he wanted answers to some practical problems such as disposal. “I went online and found out that there are companies that collect batteries and e-waste and they also recycle them. So we started contacting them and seeing if they were willing to partner.”

Nishant’s plan is to scale up significantly in the next few months and add 30 schools to his program. Despite having to study for his Class 10 board exams, he has put together a schedule that will help him study and work on his advocacy.

You may also like: TBI Blogs: “Are We Your Priority?” An Open Letter from India’s Children to the Prime Minister of India

“I wake up really early and start studying for a few hours. And then I go to school. After I return, it’s time for lunch and then sometimes I head out to different schools to give presentations on proper disposal of e-waste and batteries. And then I will study for another hour or so and then I enjoy my free time after that.” So committed he is to his project, he has created WhatsApp groups to ensure he is in touch with his point of contacts in all the schools he works with.

Today, Nishant is working furiously to get the government’s attention in spreading the word about his cause. The young lad has gone from pillar to post trying to talk to anyone and everyone from the Municipal Corporation of Greater Mumbai to strike a deal. He has also written a letter to the Prime Minister and is hoping to hear back from the government. The goal for Nishant and his family is not just to effect change in his immediate community but have the government also make this a priority moving forward.

For now, Nishant has collected over 350kg of e-waste (that includes mobile phones, laptops etc) and says that along with CMCA he hopes to create such programs in other cities across the country too. But the bright young kid has an important message to other children.

“Everyone has told me that studying is important and I am making sure to follow through. I just want to tell other kids that it is very possible to do such projects and focus on your studies too. You just need to focus on your priorities a little.”