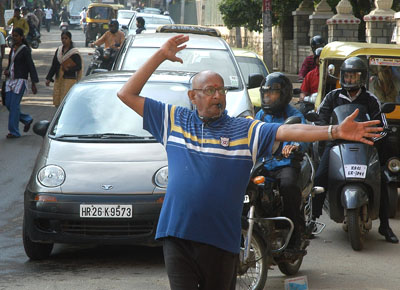 He is 66 years old. He has recently had a bypass surgery and a cataract operation. He is a retired senior executive at Mico. And he is a voluntary traffic cop at a very busy junction near his house. He is B M Ramachandra of Bangalore.

Having undertaken these duties for the past six months, Ramachandra has managed to restore some sanity to one of the busiest and most chaotic junctions in the city. At an age when most men his age would enjoy a life of leisure and retirement, spending more time with friends and family without having major commitments anymore, Ramachandra has been dutifully executing his duties as a ‘traffic cop’, controlling and directing the traffic flow during peak hours everyday. Clad in tee and Bermudas, and blowing his whistle furiously, he is present at the junction in Arakere-Mico Layout locality off Bannerghatta Road at 7.30 am everyday till 9am, and then again from sunset till 8.30 pm.

The impact of his dedicated service is plain to see. Here is feedback from one of the shopowners in the locality, who has been a witness to this phenomenon:

“Honking and road rage incidents were on the rise and it took more than an hour to reach our homes through this road. It was real hell. After this man took over control of traffic, there is order and there is smooth flow of vehicles,” said Srilakshmi Anand, who owns a commercial establishment in the area.

Not just this, Ramachandra also wakes up very early and cleans the street outside his house. And on his way to the junction, he picks up litter and drops it into the box. So what makes this model citizen tick?

“I am blessed in that I am immune to dust, sound and pollution related allergies. So, this traffic work has not taken a toll on me. I see it as a game and enjoy it. To my surprise, my health has dramatically improved after I took this up. After heart surgery, I was advised to do respiratory exercises. Whistle blowing compensated for that”, he said.

MK Ashoka and Hemant Kashyap report in Bangalore Mirror about what inspired this amazingly positive man to take up this mission:

One day, the local residents’ welfare association president R N Baliga casually spoke about the traffic issue to Ramachandra and how difficult life had become after the apartments had come up.

Ramachandra went the very next day to the spot, stood in the middle of the road and started directing the traffic. Initially, the motorists ignored him, but his persistence and obvious sincerity soon made them fall in line. Later, he politely requested shop owners near the junction not to park their vehicles, and they were more than willing to oblige. Soon, the situation improved so much that motorists started giving him flowers, some even garlanding him.

A responsible citizen, a man of action and not just words, a problem solver, an inspiration – there are many ways to describe B M Ramachandra. Most of all, he is a person we can all attempt to emulate in our own lives.