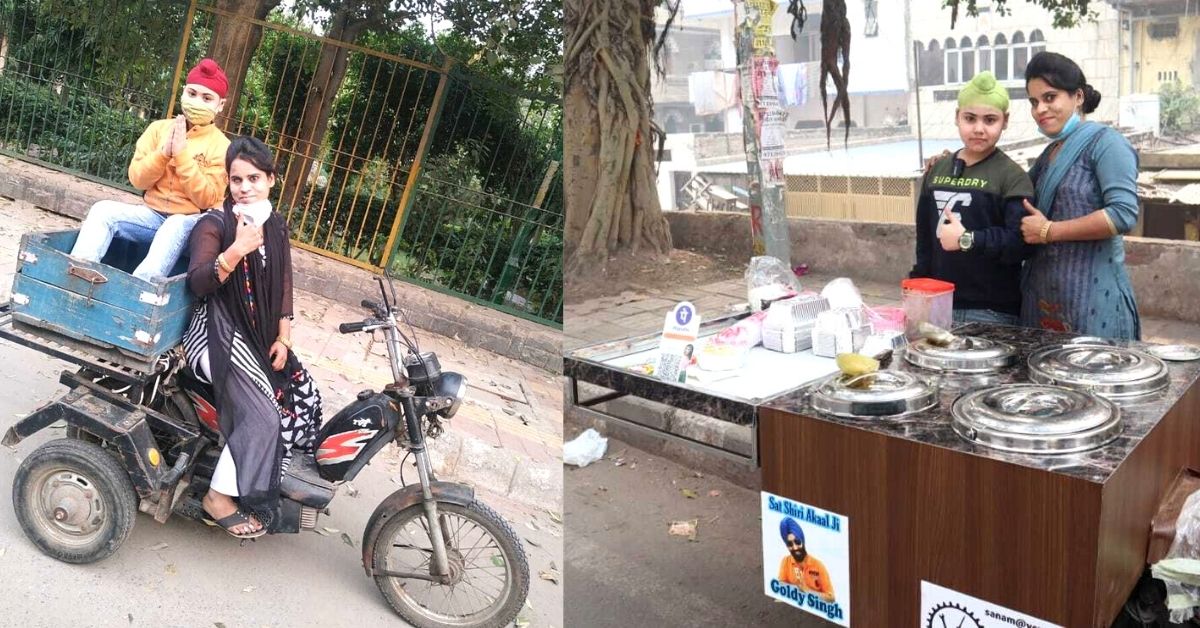 Armed with her moped and fresh home cooked meals, Asha Gupta of Delhi makes her way to Shastri Nagar each day to set up her food stall.

“Yeh Honsla Kaise Jhuke, Yeh Aarzoo Kaise Ruke. Manzil Muskil toh Kya?” (How will this morale bow down? How will the yearning stop? So what if the destination is tough?

While these are the lyrics of a song from a movie, it embodies exactly what Asha Gupta (36), a resident of Shahstri Nagar in Delhi feels.

When the pandemic induced lockdown put an end to a small business she was engaged in, she had to quickly find ways of generating an income, especially to support her family – two teenage boys and an amputee husband, who also depends on her.

The past few months have been quite a journey for Asha, who is now referred to as Moped wale Rajma Chawal didi, simply because each day she leaves home in her moped along with steaming hot rajma chawal.

She tells The Better India all about the trials and tribulations she has faced so far.

Up until March 2020, Asha sold materials of varying patterns at the weekly bazaar, which she would source from a local wholesaler. She says, “When the lockdown was announced everything stopped and there was no income for almost five to six months until September when I decided to set up a food stall near my house.” She decided to start small and test the waters before making a bigger investment.

“I knew I had to do something, and do it quickly if I wanted to keep my family afloat,” she says. “My husband had an unfortunate accident a few years ago, where lost both his legs. He has since then been dependent on me for everything,” she says, adding that it was her husband’s moped that she uses now for her food stall business.

On 2 September, armed with the moped, a makeshift wooden box to hold the food that she borrowed from a neighbour, and a lot of trepidation, Asha set out to sell the food she made. She mentions that it was her community that helped her a lot.

All the modifications to the moped were things she borrowed from people who stayed near her home. “I did not have the money to make it better and nor did I have the confidence to take the risk of starting a new business. It was almost like the lockdown took away all my confidence,” she says with a hint of sadness creeping into her voice.

“I spent about Rs 2500 on the materials for cooking. I started small, and the first few weeks, I didn’t even manage to sell much,” she says. Some of the things that she would make and take with her regularly include, rajma (kidney beans), kadhi pakoda, matar paneer, and rice. Asha spent her initial days setting up her food stall at Bharat Nagar but changed locations for there weren’t too many takers there.

She now sets up her food stall in Shastri Nagar. On 11 October, a food blogger stumbled upon Asha’s food stall and a video that he made went viral, which helped Asha’s business a great deal.

Vloggers to the rescue

Goldy Singh, a well-known YouTuber based in Delhi, was someone who came out in support of Asha early on. Speaking to The Better India, he says, “I realised that Asha ji had the potential to earn more and so along with a friend, Sanam Nijhawan, we helped transform her moped into a mini food cart.”

“We saw that she was carrying the food to the area where she set up her stall everyday in a rather rusty moped. Sanam and I helped attach to it a sturdy carrier, which now also has four hot cases and two containers for all the chutney and pickle.” The new attachment is made of steel and cost approximately Rs 30,000, which was sponsored by Goldy and Sanam.

It was Goldy who gave her the name ‘Moped wale Rajma Chawal didi’ and it wasn’t his first philanthropic venture. He also helped Geeta Jaiswal (Mrs Idli), whose story you can read here. “We are not in it for the name or fame, we are glad we could help and that Asha ji will now be able to serve more people and therefore make more money for her family,” he says.

What’s on the menu?

Named Abhay de Special, after her younger son, Asha’s stall has varying plates. She says, “Small, medium and large plates are what I serve and each has a different price point. For a small plate one pays Rs 20, medium plate is at Rs 30, and large plate is priced at Rs 50.”

Initially, she did not make rotis but mentions that now, because of the demand, she has added it to the menu. For Rs 30 one gets four rotis and a dry vegetable preparation, and for an additional Rs 10 you will also get a portion of raita.

Asha’s food stall is open every day from 11 am till 4.00 pm. The timing is prime selling time for her to sell most of her food. “To be able to do all this and also ensure that family is taken care of, I wake up at 5.00 am each day and finish all my house chores and cooking before I leave the house,” she says.

Asha is far from earning what she needs to support her family, but in a very cheerful tone, she says, “I have made a start and that’s all one needs. I know I will succeed.”