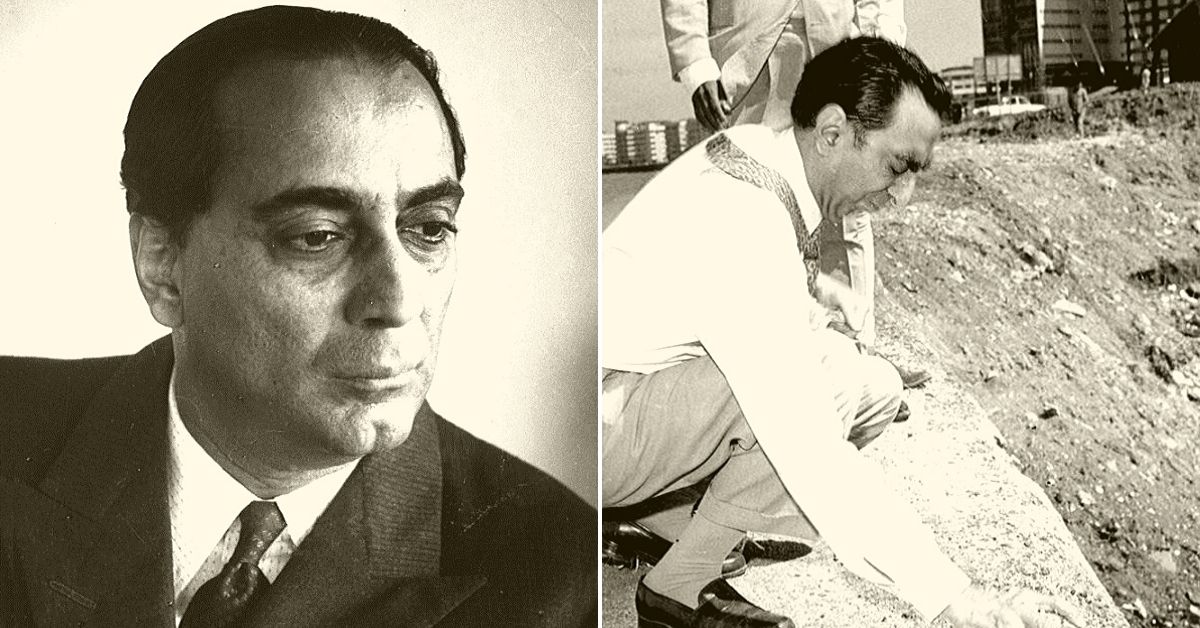 Both the brothers decidedly changed India, in their own ways⁠—Homi is the reason we are respected as a credible nuclear power, while Jamshed was instrumental in promoting arts at a time when the govt. had no money for it. #LegacyOfLegends #History

Imagine having a brother like Dr Homi J Bhabha, a Padma Bhushan awardee and the father of India’s nuclear programme. It’s both a blessing and a curse. However, delving further into Jamshed’s life, one can comfortably state that he carved out his niche and legacy, particularly after Homi’s untimely death at the age of just 56.

Until then Jamshed had primarily confined himself to his work with the Tata Group, starting as a personal assistant to JRD in the early 1940s to managing director of Tata Iron and Steel Company (TISCO).

Use this lightweight, comfortable mask to keep air pollution out and protect your body from smoke, dust and exhaust fumes.

While Homi had sought to address some of India’s most pressing concerns through science, Jamshed played a critical role in offering patronage to the arts at a time when the government itself didn’t have resources for it.

His work culminated in the inauguration of the National Centre for the Performing Arts (NCPA) in Mumbai on December 29, 1969, which would go onto include the 1109-seater Jamshed Bhabha Theatre (JBT) inaugurated on November 24, 1999.

Born to Meherbai and Jehangir Hormusji Bhabha, Jamshed and Homi grew up with privilege amidst a collection of art, music and books at their home in Bombay (Mumbai). Homi was passionate about drawing and painting, but Jamshed’s love lay in the performing arts, particularly music. In fact, he idolised legendary European composer Ludwig Van Beethoven.

In terms of their respective careers, it was Jamshed who more closely followed their parent’s wish to join TISCO in Jamshedpur. Homi, however, was in Cambridge University when he became fascinated by the magic of theoretical physics and went against his parent’s wish to become a Tata engineer.

With the onset of World War II in 1939, Bhabha couldn’t return to Cambridge, and instead joined the Indian Institute of Science in Bengaluru.

It was Homi who convinced India’s first Prime Minister Jawaharlal Nehru to start a nuclear programme in the country. His proposal to establish the Atomic Energy Commission was accepted, and this critical agency came to life in 1948.

He advocated for the peaceful use of atomic energy and was against manufacturing atomic bombs. To further his research in India, Dr Bhabha would establish iconic institutions like the Tata Institute of Fundamental Research (TIFR) and Trombay Atomic Energy Establishment (Bhabha Atomic Research Centre) in 1954.

Unfortunately on January 24, 1966, he died in an air crash near Mont Blanc when he was on his way to Vienna to attend a meeting of the Scientific Advisory Committee of the International Atomic Energy Agency. Although his death was tragic, it did stir in Jamshed a burning desire to reinvigorate the performing arts ecosystem in India, particularly Mumbai.

Soon after Homi’s death in 1966, he began working towards establishing the NCPA.

“Jamshed’s artistic pursuits assume importance when seen in the context of the times. In independent India, with the shrinking of the nobility — and in 1971, the abolition of the privy purse — patronage for the performing arts was rapidly drying up. The early years of nation building meant that most of the state’s resources were dedicated to solving the more immediate problems of bijli, sadak and pani…If India’s once-thriving traditions of music, dance and theatre were to survive, the need of the hour was someone like Jamshed, who was committed to that cause and could mobilise the necessary support and funds for it,” writes Pooja Pillai for The Indian Express.

Jamshed had no qualms about using the family’s extensive business connections and obtained JRD Tata’s support for the establishment of the NCPA.

The Maharashtra government initially rejected Jamshed’s request for a 5-acre plot of land to establish the NCPA in Mumbai. Instead, they offered him land near the Ajanta Caves, which he refused.

Not bothered by these bureaucratic hurdles, he came up with the idea of reclaiming land from the sea to set the NCPA up in the city. Just three years after Homi’s untimely death, Indira Gandhi, who was India’s PM at the time, the inaugurated the NCPA’s Bhulabhai Desai auditorium.

Eleven years later, the Tata Theatre came up at Nariman Point, where the NCPA is presently located. Setting up the NCPA was no part-time hobby for Jamshed. For its first board of directors, he enrolled eminent figures like Pandit Ravi Shankar, Yehudi Menuhin, Vilayat Khan, Satyajit Ray and PL Deshpande, among others.

None of these structures would have come up without Jamshed’s passion and desire to promote the performing arts in India.

There is a story of how, in 1997, a few months before its opening, the JBT, which was designed for staging performances ranging from full-scale operas to large format orchestras, was destroyed in a massive fire. Unperturbed, the 83-year-old Jamshed said, “Tomorrow, we begin reconstruction” in a matter of fact way, and two years later, the JBT stood tall.

Constantly working well into retirement, Jamshed eventually passed away in 2007 at the ripe old age of 93 following an accident at home.

Also Read: 10 Things You Must Know about Homi Bhabha – Pioneer of Nuclear Program in India

Although Homi’s achievements do outshine Jamshed’s in mainstream discourse, what’s undeniable was their ability to build institutions that would preserve their respective legacies long after they left this world. What both brothers did was ensure that their work would benefit generations of Indians, whether it’s in scientific research or the performing arts.

That’s a legacy you can’t deny.