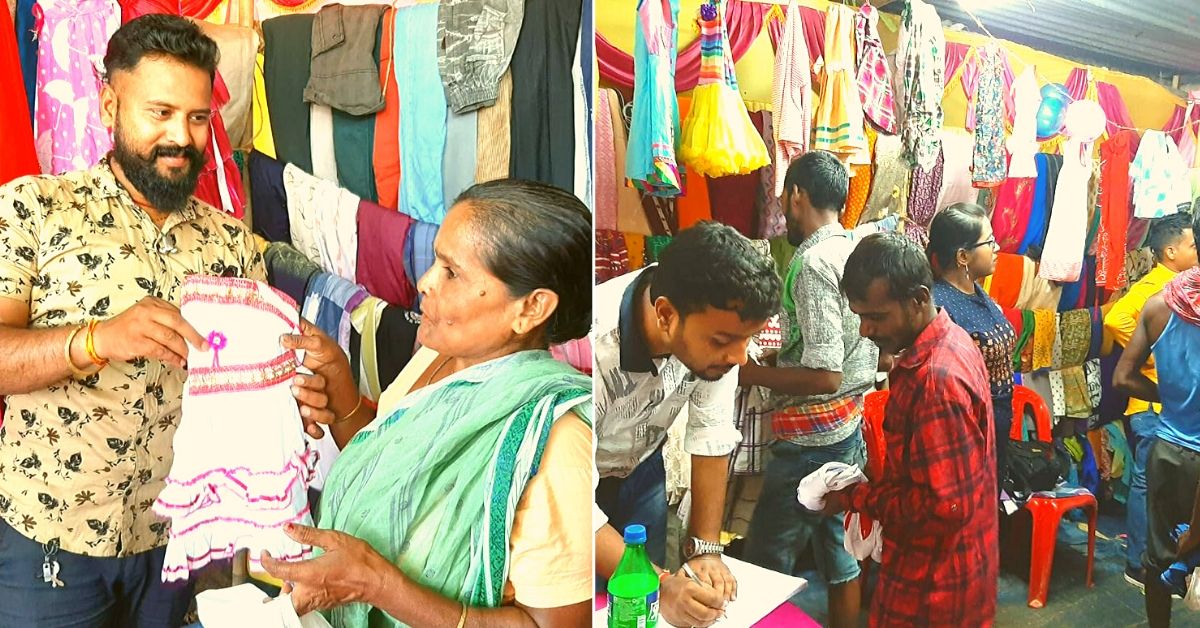 “We had initially expected to crowdsource 300-400 pieces for the Free Bazaar during Diwali but the figure went beyond 2500!” #Respect

It was on August 8, 2017, when a few concerned citizens of Udaipur, Tripura’s third-biggest city, first came together to do their bit for underserved communities in an attempt to bridge the gap between the rich and poor.

Right from spinning the yarn to dyeing and weaving the final fabric, this khadi shirt is a completely handmade product and can be comfortably worn for long hours.

Ever since, they have engaged in a whole host of philanthropic work, which include organising free meals for orphanages and street dwellers, acquiring better facilities for old-age homes, conducting blood donation drives and tree plantation drives.

As new members joined the group, they decided to register their NGO, naming it Helping Hands, and continue the good work.

This year, they organised a ‘Free Bazaar’ during the local Diwali Mela on October 27-28. They provided more than 2500 pieces of free garments, that were donated by affluent citizens, to the underprivileged.

“For this Diwali, we thought it would be a good idea to distribute free clothes to the underprivileged. We set up a stall, shared the information of Facebook and WhatsApp on October 24-25 about the clothes drive so that people could donate clothes. We had initially expected to receive 300-400 pieces during the two-day stall (October 27-28), but that figure went beyond 2500,” mentions Southam Das, one of the organisers, in a conversation with The Better India.

Unlike other non-profits or care organisations, Helping Hands does not seek external funding. Its members spend their own hard-earned money and labour on conducting philanthropic work.

“We are relatively new, but there is a desire to do a lot. Having said that, we are aware that we can’t necessarily foster revolutionary change because we fund our activities, and our pockets aren’t very deep. But the idea of crowd-sourcing used but still wearable clothes under our ‘Give Some, Take Some’ slogan, and distribute them among those who need it was something we thought was possible. Thus, we are both able to help and do so in a sustainable manner,” he adds.

At the stall, the underprivileged can take whatever they want with no questions asked. Initially skeptical about the response they would receive, things have changed dramatically for Helping Hands. Such has been the response that the organisation now has plans for setting up a permanent ‘Free Bazaar’ stall at Udaipur for the poor from 2020 onwards.

They will finalise this idea during their annual meeting coming up in December.

“The stall has attracted huge response and people have requested us to keep up the good work. There is no better feeling,” says Prasenjit Das, a student of Tripura University and a member of the NGO, speaking to The Indian Express.

Nonetheless, Helping Hands seeks to continue its endeavours in helping the underserved as ordinary citizens who have nothing else to contribute but their hard earned money and time.