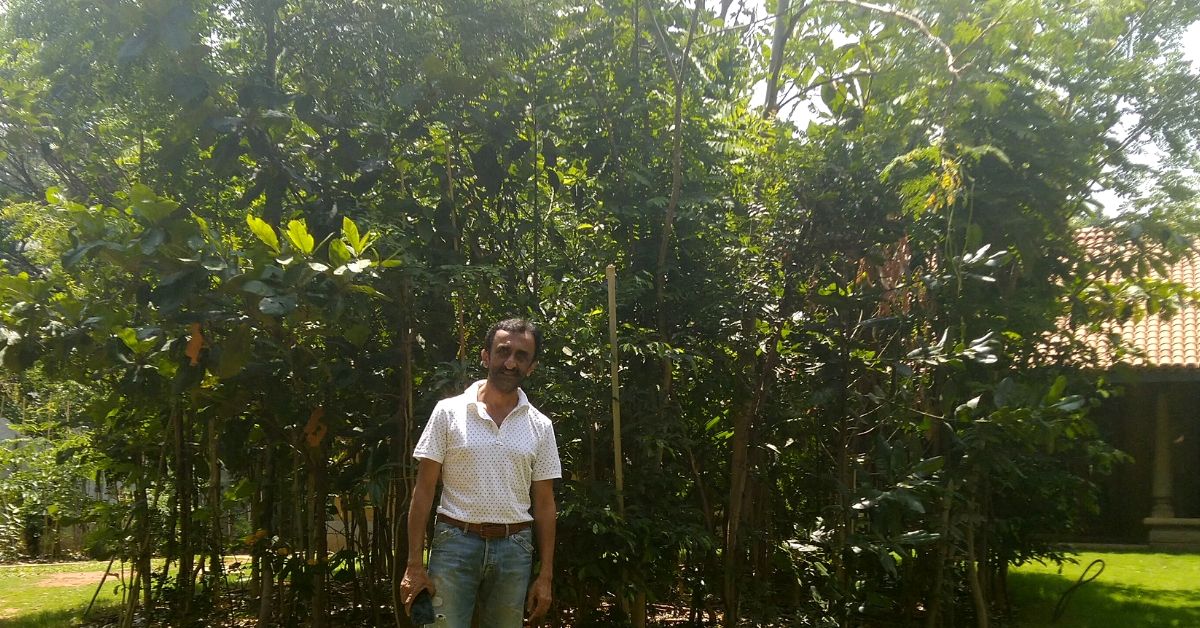 For 20 years, Bimal Desai has been crusading for the protection of Cubbon Park. Instrumental in getting night traffic banned in Bengaluru’s green lung, he has also grown eight Miyawaki forests in his backyard!

The walk from the bus station to Bimal Desai’s place was about 20 minutes. It was nearly 10 a.m., and the afternoon heat was already showing. A light breeze was helping me only so much as I wiped the beads of sweat off my forehead and hurried my steps as the sun started burning the skin on my feet.

I was on my way to interview a man who planted a forest in his backyard, but the number of trees I saw in that neighbourhood could be counted on my hand. The atmosphere changed as soon as I took that last left turn to Desai’s home.

The first thing I felt was the cool alley—almost like I have entered a whole new place. A canopy of trees, a contrast to the brightly painted independent houses in the next street, overlapped the concrete constructions till they disappeared.

The dropped temperatures, fresher air, and the greenery around the sprawling bungalow had confirmed one thing—Desai’s quest to grow a forest in Bengaluru was bearing fruit. He had moved to Bengaluru about 25 years ago with his family. Ten years ago, he bought a plot in Hebbal—a locality that was majorly paddy fields and open farms.

He had always wanted to live in a forest; the purchased land almost touches the extremely busy Outer Ring Road; this land, that had skyscrapers for neighbours, would be his sanctum

“My job had sent me to remote places in Maharashtra, Karnataka, and Andhra Pradesh; the lifestyles in these villages prompted me to live in a forest. I already had a piece of land in Bengaluru and so, I decided to grow a forest here,” the 58-year-old tells The Better India.

We began the interview with a long walk in the backyard, adorned by small patches of the forest—grown using the Japanese Miyawaki method.

In the 1960s, Dr Akira Miyawaki, a botanist, studied vegetation across Japan. He introduced this method of planting as many trees as possible on a patch of land—letting them grow vertically and utilising the resources of the soil.

The aim is to allow the trees to undergo a natural selection process and fight to survive. Miyawaki, 91-years-old today, stressed on the plantation of native canopy species over exotic plants.

Desai, who believes that metropolitan cities like Bengaluru, Delhi and Mumbai, are under serious threat due to overpopulation, was gravitated towards this method because it promised quick action to tackle our problems. 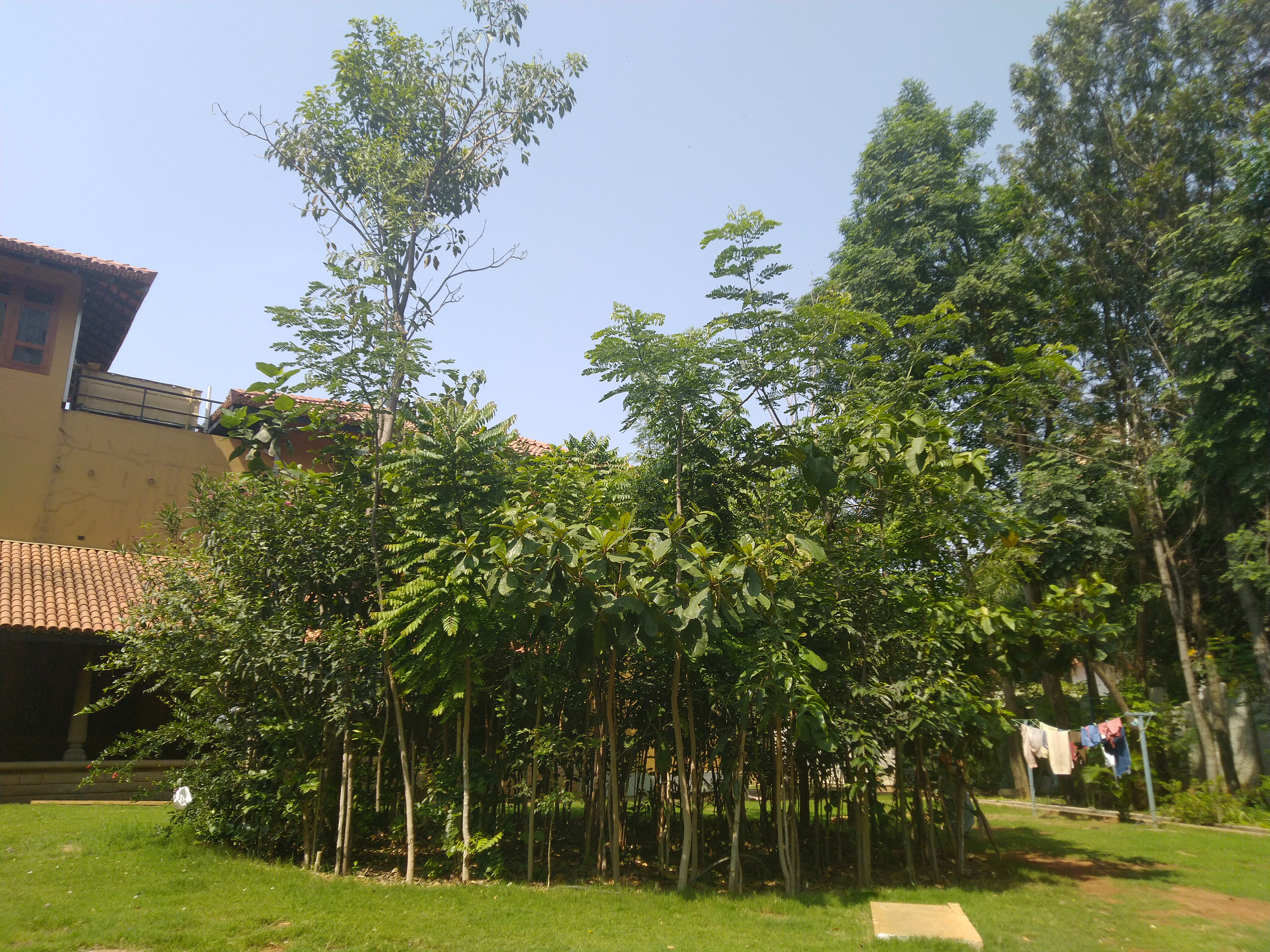 “What are the three main problems staring at the people of Bengaluru?” Desai asks, instantly answering, “Air pollution, groundwater depletion, and unpredictable rainfall. What is the simple solution to all three? Trees! We are populating and polluting cities at an alarming rate, and although awareness is growing, we need to start growing forests right now. There is no time for us to wait for the government or anyone else to grow them for us.”

A decade ago, there was nothing around Desai’s bungalow but open fields. Even then, he decided to move here with his family and begin his work towards planting the forest.

Someone suggested that he plant silver oak trees. The species, native to Australia, has found a home in the gardens and roads of India. They grow up to 35 meters tall, but the growth is extremely slow. And as opposed to the principles of Miyawaki, not a native species.

I could count a dozen silver oak trees in the huge backyard of the Desai bungalow—something that the eco-warrior regrets.

How does one plant a Miyawaki forest? 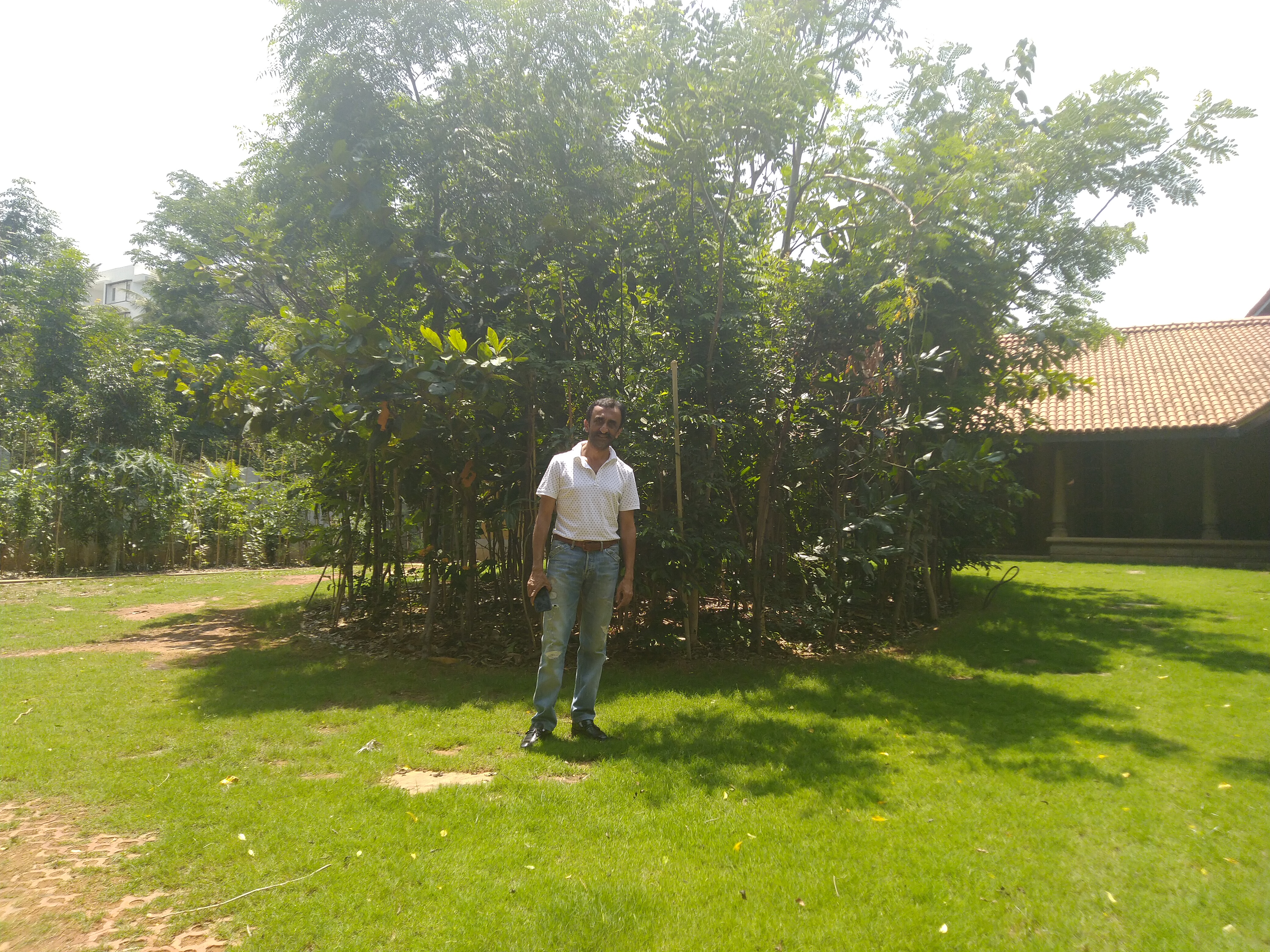 As soon as I stepped into the Desai residence, I could see a small circular patch of trees and shrubs. This, Desai tells me, was a patch he planted a year ago—one of the first he nurtured.

About six years ago, he was introduced to the Miyawaki method—a process that promised an optimum use of the land in Bengaluru.

“The forest is about 20% canopy, 40% trees, 30% sub-trees and 10% shrubs,” he explains, adding, “You can have fruit-bearing trees, flowering trees and any native species you like. You can begin with making a list of species native to Karnataka (for example) and classify them as trees, sub-trees, or shrubs. You can choose what to plant depending on the size of the land and the sunlight.”

Desai, for example, has jamun and drumstick saplings in each of the eight forest patches he has planted. The oldest Miyawaki forest is almost two years old, and the newest was planted last month. He explained that 100-120 saplings could be planted in a 10 ft X 10 ft land, of which about 90% survive.

“To ensure the success rate, you have to have a good beginning. The first step is to check the health of the soil. Some land is rich with red soil and doesn’t need much refurbishing. But some patches are polluted with garbage, and we need to dig about three feet to get to the good soil. Once we reach the nutrient soil, the pit must be filled with cow dung, rice husk, and mulch. We have exploited the land so much for decades together, that we need to give the trees a kickstart,” the eco-warrior explains.

Trees are like babies, he insists, who need a little support and regular care for the first two years of their lives. For instance, the month-old saplings in his front yard are supported by 3-foot bamboo sticks. These will be replaced by taller sticks once the saplings outgrow them. Desai waters the plants once early in the morning and once in the evening.

However, the year-old forest, just 15 feet away from this baby patch, is already thriving with earthworms, moist soil and trees that have grown over 10 feet tall. 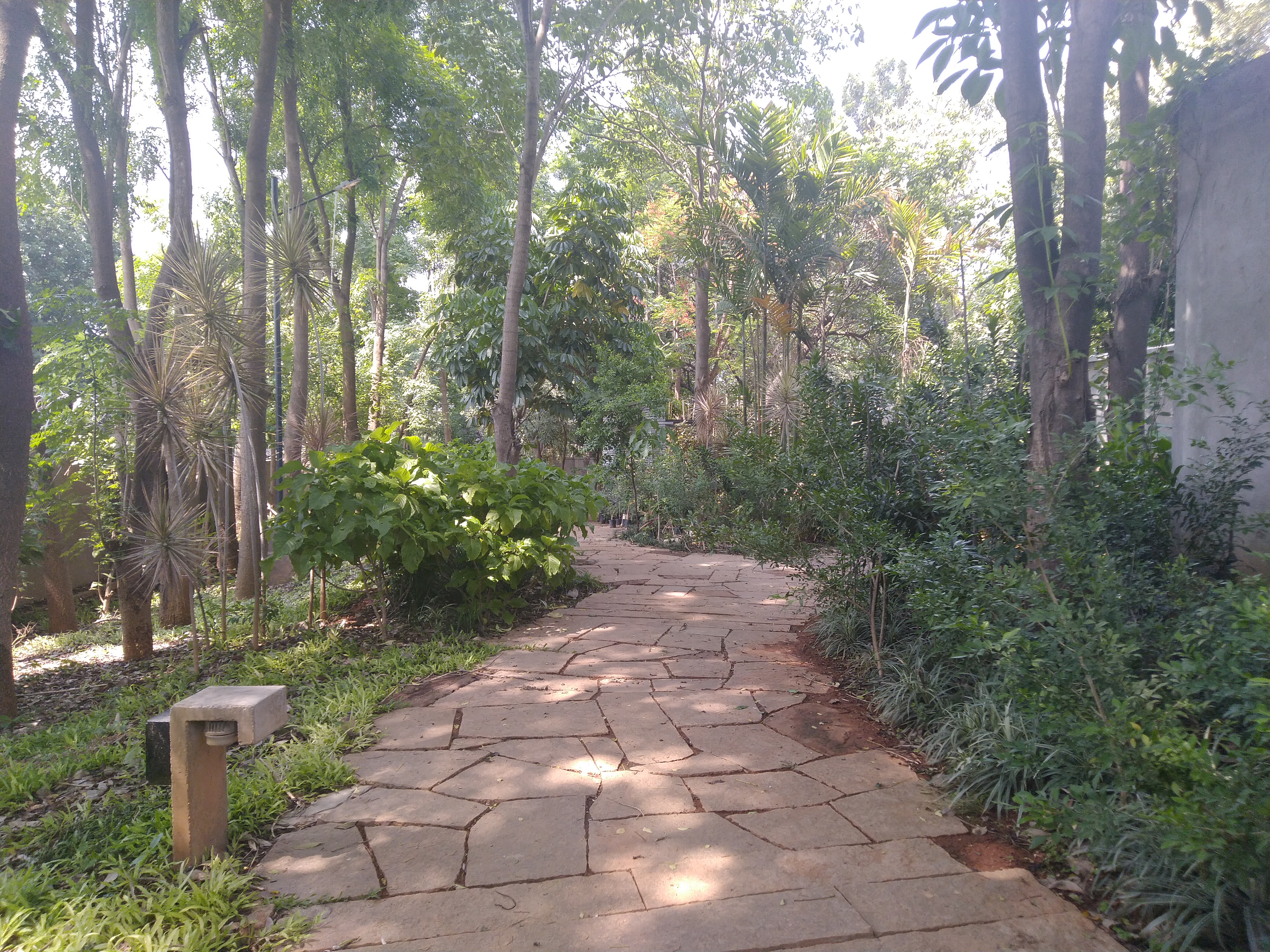 “In another year, the tallest tree will have grown another 10 feet, and the pomegranate plant will bear many fruits. At the end of that year, I won’t have to take much care of them. They will grow on their own.”

Insects, rats and reptiles, even snakes will be common visitors once the forest flourishes. And this is good news! A forest, after all, is a self-sufficient ecology, full of biodiversity where one cannot survive without the other. If the tree products are bountiful, it is unlikely that the animals will enter your home. Let them thrive in your backyard, and you can rightfully claim that you are living in the middle of the forest.

Desai emphasises that to increase the green cover of our cities, we need to act right now. “It is now or never for the cities. In our capacities, we can make our places of residence greener, and more liveable.”

He urges, “Those who have the luxury of owning land, can plant Miyawaki forests. They won’t cost much, and if you are unsure about how to plant them, we can help you (contact details at the end of the article).”

He has been consulting builders and says that the periphery of most independent premises, which are cemented and left unused, can often be used to grow trees. “Even 60 trees around a building will change its fate. Those who have 10 feet X 10 feet of land at their disposal, can grow about 100 plants successfully,” he shares.

For those among us who do not have land at our disposal, Desai suggests, “get together with your group, check out an empty land in a nearby park, take legal permission and grow a forest there. It is not much effort if you walk in the correct direction.”

The protector of Cubbon Park

Desai’s quest to increase and protect the greenery of Bengaluru began two decades ago when the Karnataka High Court had proposed an extension of their premises into the Cubbon Park. Desai was well connected in the media industry, and when he protested against the encroachment, he ensured that his voice reached the citizens of Bengaluru through the journalists.

Desai moved the Supreme Court and was turned back, but the loss never deterred him. He kept observing how the lush Cubbon Park, once the green lung of the city, was getting deteriorated by the traffic, by careless pedestrians, and the construction works in the neighbourhood that dumped all their debris in the park. Again, he filed a public interest litigation to protect the park.

Over the years, Desai has filed a total of 14 cases to ensure that Cubbon Park thrives even as Bengaluru sprawls into a concrete jungle. It is his brave quest that has ensured a ban on the night-time traffic in the park and that it is protected by gates.

Today, Desai has taken up the cause of growing forests in the city where trees are ruthlessly cut down to allow urbanisation. His 3-acre backyard has 2,000 trees, with another batch of about 100-150 to take roots soon.

Looking at his lush backyard, the Director General of Police gave permission for the premises of his office on MG Road to be developed into a forest.

You May Also Like: 3 Steps Helped This Bengaluru Society Cut Their Rs 16 Lakh Water Bill by 52%!

Through Rotary Club, Desai is also creating a forest of 4,000 trees near the Bangalore Cantonment railway station. This work is still in its initial stages and if you spot JCBs under the flyover near the station, rest assured that they are digging to grow a forest there.

You too can grow your own Miyawaki forest in Bengaluru under Desai’s guidance. Drop him an e-mail on bimaldesai13@gmail.com to seek his help.