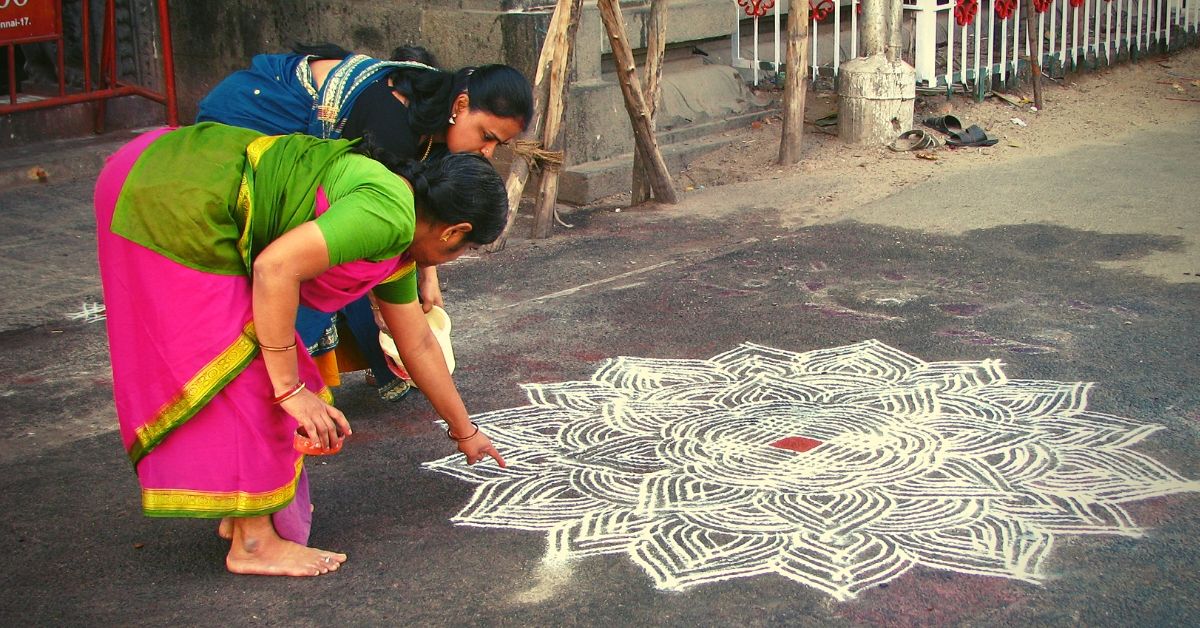 Did you know that the rice flour used to draw ‘kolams’ every morning is meant as a meal offering to ants, birds and bugs?

As a child, my mornings were always a disaster. Chaos ensued as my mother would try to feed me rice balls before the school bus arrived, while I would slip out in the verandah to observe the nicer and quieter things in life.

Leaning off the ledge, I would often be mesmerised in the perfectly symmetrical white patterns drawn on the red oxide floor of my neighbour’s porch.

Sometimes I would catch a glimpse of Amma Dida (a culturally intermixed nickname for grandmother), and how her frail figure, wrapped loosely with a white saree, bent over in a balanced position, moved with her wrinkled hands to create complicated intersecting lines of beauty. In a meditative trance, she would take a pinch of white powder from a bowl and create a new design, every single morning.

At our home as well, my mother drew similar (less geometrical and more floral) patterns with a paste of rice flour and chalk. Sometimes, I would try and replicate Amma Dida’s designs, which she informed me, was known as Kolam.

Although, at home, we would refer to it by its Bengali version, Alpana.

What made the Kolam stand apart from Alpana or Rangoli designs was the sheer complexity and the dexterity of the artist to draw geometrical patterns that somehow intersected in perfection.

Many years later, by accident, I stumbled upon the well-researched concept of the labyrinthine loops, curved lines and hexagonal fractions with flower motifs hidden inside. I learned that it was not just an illustrative prayer to a Hindu deity, but much more.

According to Vijaya Nagarajan, a professor at the Department of Theology and Religious Studies, University of San Francisco, it is a metaphor for harmony.

In her 2018 book, Feeding a Thousand Souls: Women, Ritual and Ecology in India, an Exploration of the Kōlam, she explains how the act of drawing a kolam is considered an offering to all beings.

The powder, made of rice flour, is safe for ants, birds, bugs and insects to eat. So that every morning, the household can start its day with a ritual representing generosity.

The art form is said to have originated in the Indus Valley Civilisation around 2500 BC, although there lies some dispute about the same. The term ‘kolam’ represents beauty, embodying the absolute symmetry of lines around a grid of dots and natural motifs like leaves and flowers.

The process usually begins with a grid of dots, which enables the spatial precision to achieve symmetry. In Hindu philosophy, a dot or point is a symbol of the cosmos—where all creation begins.

Interestingly, owing to its complexity, mathematicians and computer scientists like Marcia Ascher, a professor emerita of Mathematics at Ithaca College, have been studying it as an unusual example of the expression of mathematical ideas in a cultural setting.

In her ethnomathematical research (a field of study combining anthropology and mathematics), Vijaya adds, “The kōlam is one of the few embedded indigenous traditions that have contributed to the western mathematical tradition.”

From pictorial visual language called ‘array grammars’ in computer science, to knot tradition in mathematical theory and even infinity, there are more than 20 kinds of different mathematical principles embedded in kolams, she adds.

Elucidating fundamental mathematical principles, Vijaya writes how the symmetry of Kolam art involves recurring fractals in the designs, that have been repeatedly compared with mathematical models like the Sierpinski triangle, a fractal of recursive equilateral triangles.

What remains a wondrous mystery is how women like Amma Dida, without formal education and no knowledge of mathematics beyond simple counting, have been able to create and recreate such complex patterns for hundreds of years!