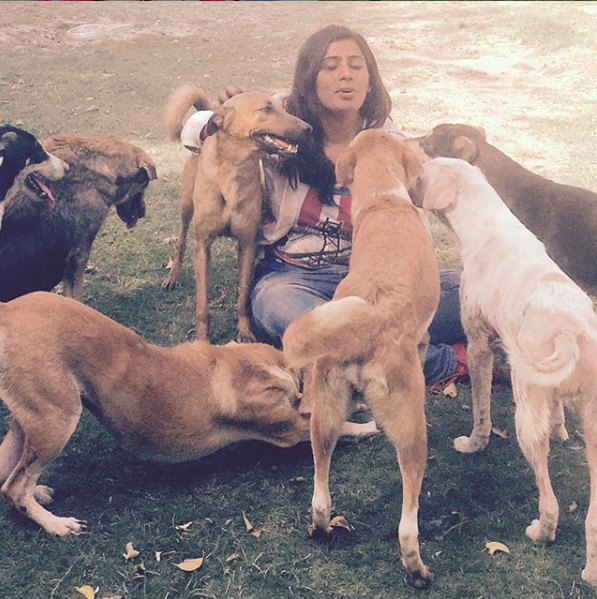 Anuradha Mishra from Noida started rescuing dogs at the age of 16. She has saved over 80 dogs that otherwise would have been victims of mercy killing.

Put To Sleep (PTS) or Animal Euthanasia is when the pet owners decide to end their pet’s life upon little or no hope of recovery from illness or injury. Once the decision is taken, the veterinarian carries out the procedure.

Just like human euthanasia, PTS or mercy killing is a debatable topic. However, it can be difficult to determine if it is right to end your pet’s suffering humanely. While some prefer putting an end to the pain of the dogs, some choose to nurture their dogs with care and love.

Anuradha Mishra belongs to the latter school of thought. Originally from Ghaziabad, Anuradha, for the last 22 years, has been on a mission to rescue dogs that have been left to die. These include paralysed, blind, injured and differently-abled dogs.

Anuradha’s first rescue operation was as a mere 16-year-old. It was for the first time that she felt a real connection to dogs.

Speaking to The Better India (TBI) she says,

Back then, I was living in Ghaziabad. Some eight dogs in my colony were poisoned. For hours no one attended the dogs who were in agony. Seeing their plight, I immediately called for an auto rickshaw and took them to the nearest veterinary clinic. Only half of the dogs survived. That incident changed my life and since then I have been rescuing dogs.

She kept the poisoned dogs with her post-treatment. Anuradha, a dealer in skin care products, went back to her routine. Just when everything was going well, another incident gave her sleepless nights.

Unaware of the PTS concept, she was in for a shock when a dog that she had rescued was put to sleep.

She narrates the horrific incident, “I had rescued a paralysed dog a few months after my first rescue operation. I took him to the veterinary clinic again. There, the doctors gave him Pentobarbital injection and put him to sleep. Next day, when I paid a visit to the clinic, I was taken aback. That incident motivated me to rescue dogs that no one wants.”

From blind, injured to paralysed dogs and puppies, Anuradha would bring home every kind of dog. Soon, the neighbours started objecting the presence of stray dogs in her complex. She was forced to move out.

In one year, Anuradha changed 18 homes, from Ghaziabad to Noida, for her love for dogs. “With time, the number of dogs in my house increased. It is sad that none of the landlords and people was okay with my decision,” she says.

With no option left, she took some of the dogs to NGOs and animal welfare shelters in Noida. Unfortunately, none of the shelters or NGOs was ready to take the dogs who had very slim survival rates. Either they would demand money from her or would resort to PTS.

Determined to save these helpless animals from an uncertain fate, Anuradha opened ‘Hope 4 Speechless Souls’- an animal shelter in 2014.

With her personal savings, the 38-year-old purchased a residential place in Noida and moved into the apartment along with her eight dogs. Yet again history was repeated, and the people living in the complex objected to the dogs.

Along with her friend Rohit Yadav, she hunted for places and finally bought an open plot near Sector 134 in the same year. Today, more than 80 dogs of various breeds and ages have a safe place of their own. At the shelter, she provides three meals a day that include eggs, rice and Pedigree.

Since she quit her job to look after the dogs on a full-time basis, taking them to the clinic and treating them became a costly affair. Though her parents and friends extended their support, Anuradha did not feel right, and so she decided to find an alternative way.

She undertook a three-month training course at the Noida Animal Hospital, “The course afforded me a license and the expertise to treat the animals.”

Today, Anuradha is able to give proper medical care to every dog she rescues.  Whenever she needs an extra set of hands, her friends – Rohit and Shubhli Bhalla, come to the rescue!

In terms of financial help to sustain the shelter home, her family and donors support her.

From hailstorms that have almost destroyed the shelter to the society discouraging her at every step, there have been many challenges that Anuradha has overcome, “If it were not for the unconditional love from the dogs, I would never have been able to save my babies.”

There have been times when I believed that the dog would not make it through the night or when there was no hope for the paralysed dogs to come back to normalcy. With proper care and food, the situation has overturned, she signs off.

Also Read: This Mumbaikar Might Be Only 26 But He Has Already Rescued 10,000+ Animals!