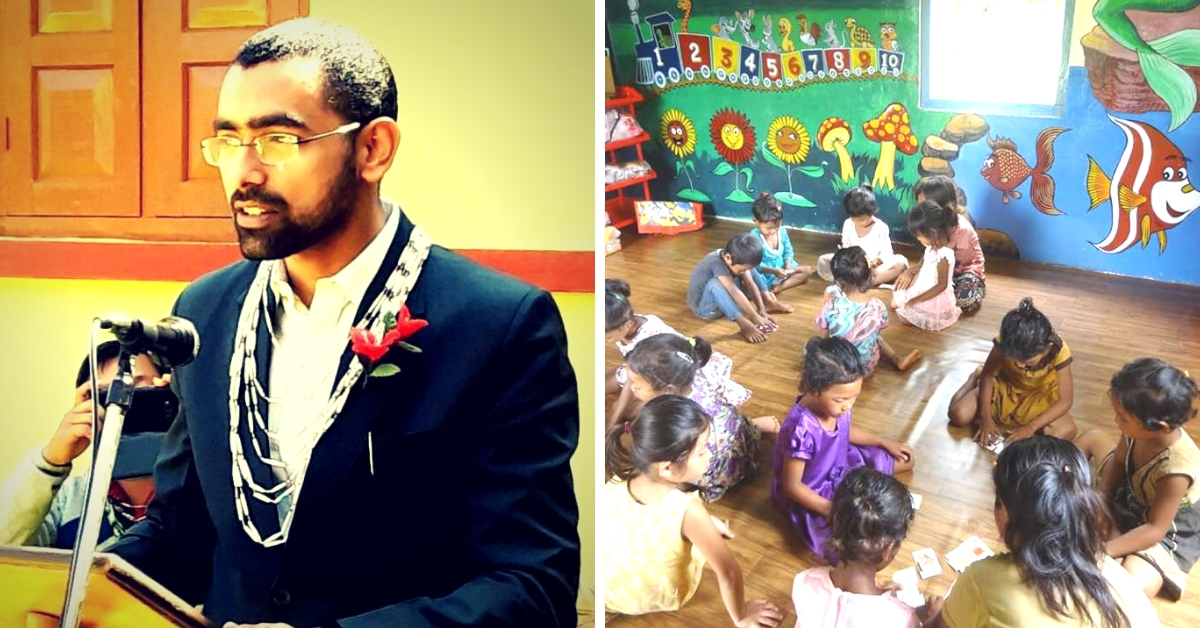 From building a better future for kids to literally lighting up lives, Swapnil Tembe has gone above and beyond to make a difference in the lives of many!

For us, urban folks, Anganwadi Centres (AWCs) hold very little value and come to our attention only when we click on a rural affairs story in the media. However, this isn’t the case for Indian Administrative Service officers (IAS) officers posted in remote corners of India.

“If you think about it, they are the primary interface for the children of rural areas with the world of learning, nutrition and health,” says Swapnil Tembe, a 2015-batch Indian Administrative Officer (IAS) of the Assam Cadre, who is currently the Sub Divisional Magistrate of Dadenggre constituency in West Garo Hills district, Meghalaya.

Taking a survey of all the AWCs under his jurisdiction, what he saw were dilapidated and unhygienic structures where the only state-backed service available was the regular food children would receive in the morning (provided there was enough stock) as part of the Central government’s Supplementary Nutrition programme under its Integrated Child Development Services (ICDS) Scheme.

AWCs are supposed to offer a lot more to rural children, especially in terms of an education they receive before entering the public-school system.

In his blog, Swapnil recollects what the Nokma (village headman) in one area told him about the state of the AWC.

“There aren’t many toys, books or learning material. What they have is too less for the number of children around. The walls are dilapidated and not hygienic. The people now want to send their kids to private playschools, at least those who can afford. The private ones are of course far off. Such people are a handful though. It is a difficult proposition,” the Nokma said.

Considering the scarcity of funds for the ICDS scheme and an infrastructure that is falling apart, how are young rural children expected to acquire the desire to learn and gain knowledge at a critical juncture in their lives? With more than 100 such AWCs under his jurisdiction, the task before Swapnil looked nearly impossible.

Since upgrading all of them at once wasn’t feasible, what Swapnil did was to focus on one and make it a Model Centre. He reasoned that would not only convince the government department that was in charge of overseeing these facilities, to upgrade other centres but also inspire local communities into investing themselves and their resources for the cause.

After multiple consultations and discussions, Swapnil zeroed in on the Dilsigre Anganwadi Centre, which was ideal considering its proximity to the sub-division headquarters, where Swapnil and his team could monitor it closely. After an unsuccessful bid at crowdfunding on Milaap, the administration began reaching out to members of the local community.

“Then we tried a community participation approach where we [conducted] meetings to convince the local people about the relevance of this initiative. Some of them pitched in, in whatever way they could. Some people from outside Meghalaya also did their bit in contributing whatever way they could. We did a tiny bit from our office side too. Collectively we were able to realise our dream,” he says.

With resources not entirely coming in from the government, the administration was able to introduce a little flexibility in how they upgraded the Dilsigre AWC.

“We repaired the structures, painted them and got a talented local artist to wall paint the entire structure. We got toys for the kids, learning books and storybooks, cushions, carpet, water filter, containers for food storage and many other things,” adds Swapnil.

The upgrade on this particular AWC was completed in a month (July 2018).

And the impact of this upgrade was almost immediate. Children hadn’t left in the morning after their meal, but instead were singing songs, reciting poems and generally enjoying themselves with an Anganwadi worker in attendance to supervise them.

Utilising just Rs 1 lakh gathered from members of the local community and the administration, Swapnil’s team was able to achieve this task. “All it needs is community participation and a little help from those who are privileged,” says Swapnil.

If you want to help his administration with upgrading other AWCs, you could call him at +91 8527345879 or send an email to tembe.swapnil@gmail.com. You can also contribute here.

Not his first rodeo

Another interesting community-led development initiative in the remote villages of Dadenggre Sub Division was the provision of high-powered solar lanterns which even children in a household could use to study at night.

The inspiration for this initiative struck him on his first day as SDM during Diwali late last year, when Swapnil found himself in darkness.

Alongside his batchmate, Shantanu Sharma, who was posted as SDM in Sohra (known otherwise as Cherapunjee), Swapnil began gathering funds for this initiative with a crowdfunding campaign on Milaap. Prior to that, however, all the necessary groundwork of finalising suppliers and cost were completed.

“We initially decided to go for 100 lights each costing 1500 INR only after successful negotiation with the suppliers. They also pledged to give 15 lights from their own side as this was being done for a good cause. I feel extremely happy to share that not only did we achieve that target amount, but we also exceeded it by almost 1,00,000 INR which enabled us to provide more lights,” he writes in a blog.

Once acquired, the next challenge was transportation. With roads in poor condition and very few transport trucks heading to those villages, the administration roped in nearby transport establishments to bring in these solar lanterns.

“We involved the BDO office to find out which were the remote villages in the subdivision where the condition of the grid was worse or was non-existent. They did wonderful work and also provided us with a list of households so that we could provide one solar lantern to each [of them],” he writes.

During the distribution process at various villages, the administration and local community members demonstrated how residents could use these solar lanterns. By early December there was light in some of these remote villages. In fact, the IAS officer used a similar model to acquire computers for an orphanage in Tezpur, Assam, where he was undergoing his probation.

Why does this model work?

“There are certain advantages this model has. It’s faster, gives you the flexibility and promotes community participation,” explains Swapnil Tembe IAS.

Efficient administration entails such levels of community participation, and thanks to the internet, civil servants (IAS officers) no longer have to wait to get past all the bureaucratic red tape involved in the allocation of funds before they undertake any serious initiatives.