10 IAS Officers Who Made 2017 Better With Their Brilliant Initiatives Unwilling to be stifled by red-tapism, these dynamic and dedicated IAS officers are infusing fresh ideas, efficiency and inclusivity into governance!

Sardar Vallabhbhai Patel had famously described the Indian Administrative Service (IAS) as the “steel frame” upon which the rest of the bureaucracy would rest — a bastion of India’s best and brightest that would ensure continuity of good governance irrespective of regime change.

However, over the decades since Independence, doubts have often been expressed in many quarters about whether the steel frame is still as strong or if it has become rusty and weak.

The good news is that a much-needed transformation is slowly but steadily rolling in. And its happening due to dynamic and dedicated IAS officers who are bringing in fresher ideas, unwilling to be stifled by red-tapism and who look forward to changing the country for the better.

Here is a list of 10 inspiring IAS officers who have gone above and beyond to make a difference in the lives of many in 2017. A 2007 batch IAS officer of Kerala cadre who has recently been appointed the secretary to the Minister of State for Tourism, Prasanth Nair has earned much public acclaim for kickstarting a slew of popular initiatives as the collector of Kozhikode.

His innovative ideas — such as Operation Sulaimani, a decentralized participatory project to address hunger in urban areas; Tere Mere Beach Mein, a project to tackle waste management at Kozhikode Beach; and Yo Appooppa, an attempt to improve the quality of life of the elderly — were huge runaway successes, thanks to large and wholehearted participation of people of the coastal city and beyond.

Affectionately called “Collector Bro”, Prasanth is also famous for a unique proposal he had put forward to the people in his district. He offered a free plate of Malabar biryani to every individual who pitches in to clean a 14-acre pond in Koyilandy. Unsurprisingly, the idea was a resounding success! 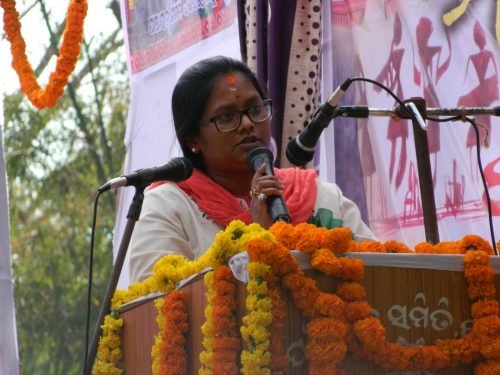 The tribal villages in the thickly forested area of Odisha’s Nuapada district often have a very special guest — the district collector of Nuapada, Poma Tudu, who treks through the rugged terrain for more than two hours just to hear their grievances.

The fact that the forest is not only a Naxal-affected hostile zone but also a terrain infamous for man-animal conflicts did not deter Poma. Realising that the residents of these tribal villages had to travel over 90 km to reach the district headquarters and avail government services, she was determined to visit the villages herself so that they could share their grievances.

A graduate of Delhi’s Lady Hardinge Medical College, the 2012 batch Odisha-cadre IAS officer now plans to fast-track connectivity and medical services to the villages. Interestingly, Poma didn’t have to look far for a role model — her mother is the first woman in her tribal family to go to school, college and on to get a bank job. On the occasion of Civil Services Day 2017, the district collector of Dungarpur (in Rajasthan) Surendra Singh Solanki was conferred with the PM’s award in the category of best innovation for his unique solar lamp project that was turning poor and lesser educated tribal women from the most backward blocks of the district into green entrepreneurs.

To do this, Surendra initiated a collaboration between the district administration, IIT Bombay and Rajeevika (Rajasthan Grameen Ajeevika Vikas Parishad) to form women self-help groups (SHGs). The members were then trained and mentored to help them locally assemble, sell and repair solar lamps. These lamps were distributed to students and needy people (especially in remote areas) at competitive prices thus benefiting the masses at large.

Last year, Surendra has also set an endearing example by adopting 9-year-old Chhaya Pargi from Udaipur’s Muskan shelter home. He had learned about her plight (orphaned at an early age, she had been forced to run away from home after her aunt tried to kill her) on a routine inspection. Deeply moved, he pledged to bear all her educational and personal expenses to ensure that she got the opportunity to realize all her dreams. In April 2017, Kerala’s Kannur became India’s first plastic-free district, that too in just five months. And the man who played a pivotal role in this sustainable transformation was Kannur’s young District Collector, Mir Mohammed Ali.

A 2011-batch IAS officer of Kerala cadre, Mir initiated a focussed campaign towards phasing out plastic carry-bags and disposables last November. At the same time, under his guidance, the district administration heavily encouraged the use of handloom-made bags made by various weavers’ cooperative societies of the district

Mir also directed heads of local bodies to take stern action against violating business establishments that continued to give away plastic carry bags and disposables such as plates and cups. His determination and hard work paid off when the appreciative public joined the effort to make Kannur the first district in the country bereft of plastic.

You May Like: Five Indian Officers Who Fought Tooth& Nail to Give Us #FreedomFromCorruption A 2001 batch IAS officer of the Madhya Pradesh cadre, Parikipandla Narahari was recently awarded at the NCPEDP-Mphasis Universal Design Awards – 2017 in recognition of his outstanding work for persons with disabilities. But this is just one notch on the tall list of notable achievements under his belt. During his terms as District Collector (DC) in various districts across Madhya Pradesh, Parikipandla has initiated several programmes that have garnered widespread admiration in administrative circles.

For instance, he introduced e-health ideas (such as Active Tracker devices) to eradicate female infanticide and transformed Gwalior in to a ‘barrier-free’ city by building ramps and railings so that persons with disabilities, senior citizens and pregnant women do not face any problem in accessing public places.

Another brainchild of his, the Ladli Laxmi Yojana (that aims to lay a firm foundation for girls’ future by improving their educational and economic status), has become a source of inspiration for many a state, including Andhra’s Bangaru Thall and Central government’s ‘Beti Bachao Beti Padhao’ scheme. In the recent months, pregnant and lactating women visiting primary health centres (PHCs) for antenatal check-ups in Telangana’s Medak district have been provided with a wholesome lunch on all days of the week. The best part is that this is happening without the addition of a substantial financial burden on government exchequers as the food is brought from local Anganwadi centres.

The idea of serving food at PHCs was conceived by Medak’s popular district collector, Bharathi Hollikeri, after she realised that pregnant women often missed lunch because they returned home late and tired after time-consuming medical investigations at the clinics. She also collaborated with IIT Hyderabad to conduct an extensive socio-economic survey of villages that would help identify grassroots issues.

Bharati is also responsible for many other positive transformations taking place in the district. Her surprise sanitation checks and frequent field visits have helped Medak achieved an Open Defecation Free (ODF) status. Under her aegis, the district administration has also teamed up with NGOs to provide career counselling for girl students and to encourage organic farming by setting up a Women Farmers’ Federation. From initiating the construction of one lakh individual toilets (under the Palle Nidra programme) to water conservation in drought-prone (under the Handri-Neeva project), PS Pradyuman is a man on a mission. His well-planned and inclusive initiatives have breathed new life into the development of the Andhra Pradesh district.

Pradyumna started ‘Palle Vanam’, a rural afforestation programme that will create natural green spots with benches and walking tracks for villagers. Another popular programme that he has initiated is ‘Nirbhaya Patrolling’, in which women cops on electric bicycles keep an eagle eye on zones covering educational institutions, bus stops and areas vulnerable to sexual harassment.

To provide the agriculture equipment on hire and microcredit to farmers, Pradyumna has also established affordable hiring centres. Moreover, to improve the service delivery systems at anganwadis, the district administration has launched the ‘Yashoda’ diploma programme that will teach them the basics of English language and computer skills alongside best practices in community mobilisation, health and nutrition. A 2009-batch IAS officer of Chhattisgarh cadre, Saurabh Kumar’s unique initiative is giving the conflict-ridden district of Dantewada a new lease of life. Understanding how the lack of education and joblessness could push local youth towards a life of violence and extremism, the pro-active collector introduced counselling sessions to help students make the right career choice.

Called Lunch with the Collector, these sessions involve Saurabh and other senior officials directly interacted with students — discussing career options, clearing their doubts and bolstering their self-confidence. Unsurprisingly, this thoughtful initiative has endeared him deeply to the locals of Dantewada.

Saurabh has also received the PM’s award in the category of excellence in innovation for converting Naxal-hit Palnar village of Chhattisgarh into a cashless village post demonetisation, though it had no cellular connectivity! Mahbubnagar district of Telangana has been setting quite a few development records for some time now. Villages have rapidly become open-defecation free and farmers are increasingly turning to organic methods. The district has also been in the news for successfully digging soak pits in all the houses as well as for its very successful Haritha Haaram (afforestation) programme.

The man driving this amazing transformation is the enterprising district collector of Mahbubnagar, Ronald Rose. A 2006 batch IAS officer of the Telangana cadre, Ronald had single-handedly ensured the effective implementation of government initiatives in the district and taken it to the forefront of the rural development in the state.

He is also the brain behind Divyang Solar Society, an initiative that employs differently abled persons in the production of affordable, effective, energy-efficient and non-polluting products for rural India. Recently appointed the collector of Salem district, Rohini R. Bhajibhakare is no less than a celebrity for the local people. The daughter of a marginal farmer, the petite and pertinacious bureaucrat smashed several glass ceilings to become the first woman collector of the Tamil Nadu district since 1790.

Known for her people-centric governance, Rohini conducts surprise checks in government hospitals, keeps in touch with officials through Whatsapp, gives pep talks to school students and personally visits the rural areas to listen to people’s grievances. Moreover, she has banned the use of plastic and polythene articles on the Collectorate campus, a prelude to her target of achieving plastic-free status for Salem.

Rohini also won many accolades during her earlier tenure in Madurai, where she pioneered the cause of safe sanitation and watershed development.

Also Read: Meet The Youngest IAS Officer to Be Appointed to a CM’s Office!