The people of Kozhikode have made a commitment to not let anyone go hungry in their city. They are silently funding a free meal coupon initiative that has fed over 9000 people in the last one year.

The people of Kozhikode are silently funding an initiative that feeds anyone who is hungry for free, with utmost dignity.

“Nalla Manushyar Aanu” – “They are good people.” This is a default comment that you will hear about the people of Kozhikode, Kerala. From its fabled auto drivers who return every penny of change, to its palliative clinic that provides free care for the terminally ill, to simple heart-warming selfless conversations, the tales of Kozhikode’s good hearted people are greatly cherished.

Now here is a reason why you will also chime in with some words of praise – Kozhikode makes sure no one in the city goes hungry! Be it the poorest, the not so poor, be it you or me – the hungry will be served food for free, with utmost dignity.

People in need can collect a free meal coupon from any of the distribution centres and walk into any restaurant in the city – a meal will be served, no questions asked, no explanations sought.

Pic for representation purposes only: kerala.in

“We cannot ask a hungry person to get his hunger attested by a certified gazetted officer! That is why we insisted on the philosophy that ‘no questions will be asked’. If you ask for a food coupon, you will get it, it is as dignified as that,” says District Collector of Kozhikode, Prashant Nair, the chief architect of this project called ‘Operation Sulaimani’, eponymous of Kozhikode’s very own local black tea, served with a dash of lemon and cardamom.

The project was launched by Kozhikode’s District Collector, Prashant Nair, who envisaged this as a community owned and community driven initiative in its entirety. The Collector’s office initiated it and the Kerala State Hotel and Restaurants Association roped in over 125 city restaurants to become a part of this.

But, there are no big sponsors nor do any government funds flow in. The small and big contributions by the citizens are dropped into little boxes with ‘Operation Sulaimani’ inscribed on them. 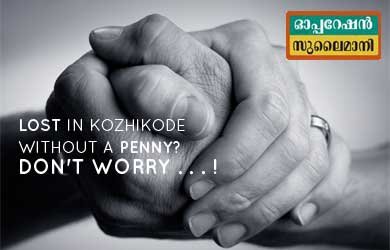 The volunteer team has placed the boxes across the city, into which nameless donations are made. This money is used to reimburse the meal coupons that are collected at the restaurants. Interestingly, Team Sulaimani does not take a penny from the collected money to meet its administrative costs. This money is meant only to feed the hungry, they insist.

In April 2015, Operation Sulaimani made the free meal coupons available at the Collectorate, Village and Taluk offices. Coupons were also distributed along with newspapers with the intent that people who read newspapers can offer the coupons to those in need. An army of volunteers went around the city to spread the word and distributed the coupons.

Just two days after the launch of Operation Sulaimani, the Collector got a massive one crore donation offer, which he refused. Yes, he refused!

The team believe that the spirit of Operation Sulaimani lies in the collective responsibility taken by the people to care for each other rather than an act of benevolence by any individual or organization.

This collective spirit has proved to be indeed powerful by feeding 9000 people in the last one year, not running out of funds, and not showing signs that the city’s good spirit will allow them to run out too.

One of the striking aspects of Operation Sulaimani is the fact that it gets fulfilled within the capabilities of existing systems. No big kitchens to feed the hungry were built and no massive funds were sought in the name of hunger eradication. By leading people to any restaurant in any part of the city, it blended the cause into the everyday function of Kozhikode’s restaurants.

The District Collector adds, “There is no food wastage nor do we have to worry about the safety of the food. If we had chosen to build a large kitchen to supply free food, we would have all these problems. But we just decided to use the existing system and make the best use of it.”

One of the restaurants in the vicinity of the city mental hospital feeds several people who come in with coupons. The restaurant owner says his life has never before felt so blessed.

Many restaurant owners like him do not want to take the reimbursements but Team Sulaimani insists that they are paid.

Some people doubt if such a facility will be misused, but the team is not worried about that. Rather, it is finding it challenging to reach more people who are in need. The members found that hunger is not just about the people on the streets, the homeless, it is also discreetly present within our communities. Reaching these people and making them aware that food is the last thing they need to worry about is what the team is obsessed with.

If you noticed, we haven’t got any quotes from any beneficiary of Operation Sulaimani nor put up their photos. Team Sulaimani believes that the dignity of the people should not be infringed on, and we salute that spirit.