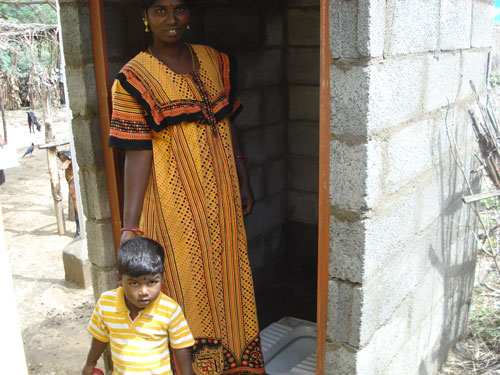 D. Paul Sathianathan, CEO of GUARDIAN, a microfinance institution and a not-for-profit organisation, talks about their work of providing loans to the society to ensure access to clean water and toilet facilities in every household.

We don’t talk toilet facilities; after all we live in the urbane world of shower rooms, steam rooms and powder rooms. So much so that we don’t even call a toilet, a toilet anymore! Forget sparing a thought for people who live without basic toilet facilities. GUARDIAN, a body dedicated to providing water and sanitation facilities to Indian homes, brings to our notice the large percentage of our population which is living without the necessities.

Gramalaya Urban and Rural Development Initiatives and Networks (GUARDIAN) is a Microfinance Institution (MFI) and a not-for-profit organisation with no capital. It is supported by Gramalaya, an NGO that has been a pioneer in water and sanitation for more than two decades in Tiruchirapalli District, Tamil Nadu.

We interact with D. Paul Sathianathan, Chief Executive Officer, GUARDIAN and understand that ‘defecation’ may not be something that we like to talk about but is an important area of concern. He believes:

Controlling open defecation in a country is not just a huge social cause and service but also a big step towards a healthy environment. And anyone who can contribute towards this cause is actually playing a big part towards the building of the nation. Open defecation is rampant in almost every village despite the existence of community structures at some places.

Paul says the problem lies in the traditional mind set of the community. “We need to sensitise and educate the community on the dangers associated with open defecation. Issues like how the faecal matter contaminates the water bodies, problems in collecting water from the public stand posts, inadequate water for family needs and problems faced by adolescent girls in search of hiding places for defecation need to be discussed with the people.” Group meetings, interactive sessions and campaigns are the tools that can be used to spread awareness, “Frequent interaction with the communities through meetings at their villages can bring about a change.”

Paul worked in a government sector for more than two decades before working with Gramalaya for five years. In 2007, he was appointed as the CEO of GUARDIAN. He has had an exposure on micro credit operations at BASIX, Hyderabad & urban and rural sanitation in Bangladesh with WaterAid. He has also attended a Sanitation Symposium at Los Angeles, organised by American Society of Engineers of Indian Origin and made presentation on GUARDIAN’s initiative under water credit.

Gramalaya is dedicated towards providing and improving the water, sanitation and hygiene facilities in the rural, urban, coastal and tribal population of the country. In Gramalaya, I was committed towards generating hygiene awareness and promoting household water and toilet facilities, and it was during that time that S. Damodaran, founder of Gramalaya, discussed the idea of starting an MFI exclusively for water and sanitation with the key staff of the NGO, and GUARDIAN was formed.

GUARDIAN provides loan to the society for creating household water and sanitation infrastructures and technical support for low cost toilet constructions. “We facilitate PRIs for getting water connections, usage of infrastructures and maintenance,” he says. Paul lists down a few obstacles in the running of GUARDIAN. “Inadequate loan capital and dealing with government policies and regulations.”

As for the rewards he counts customer satisfaction as the biggest one followed by the chances and success of coming up with innovative loan products and promoting the unique concept of MFIs for water and sanitation. His long term goal for GUARDIAN is to ‘reach the unreachable’ and ensure easy & clean access to water and toilet facilities for every household. Ask him if you could do your bit and he says, “You could wash your hands with soap and encourage everyone to do so too, this could be the first step towards minimisng the risk to most diseases.” Now that isn’t too much to ask for, right?

This post was first published on Halabol Voices, which is an initiative of Halabol – a platform for initiating change.