Here is the fascinating story of how India's first-ever indigenous supercomputer was made, a major milestone in modern India’s technological odyssey.

“Great nations are not built on borrowed technology.” – Vijay Bhatkar, the Father of Indian Supercomputers

In India, the name C-DAC (Centre for Development of Advanced Computing) has become synonymous with supercomputers, a term that denotes any computing environment which makes use of advanced tools, high computational speeds and efficiency to help researchers in different fields such as scientific R & D, weather forecasting, missile simulation, space science, pharmaceutical research and much more.

For the uninitiated, what really makes a Supercomputer “super” is a concept called parallel computing. Basically, parallel processing involves the breaking up of tasks into smaller tasks that can be processed in parallel. The end result is obtained by combining outputs from each processor.

Here is the story of how India’s first-ever indigenous supercomputer was made, a major milestone in modern India’s technological odyssey. The supercomputer effort in India began in the late 1980s, when the US stopped the export of a Cray supercomputer because of continuing technology embargoes. During the 80s, USA and some other European countries had developed super computers, which were critical for developing satellites and nuclear weapons. These countries refused to transfer the knowledge of creating super computers to India, fearing the developing nation might use it to design missiles and warplanes rather than forecast the weather.

Faced with a technology-denial regime that denied its scientific community access to supercomputers, India set up Centre for Development of Advanced Computing (C-DAC) in March 1988 with the clear mandate to develop an indigenous supercomputer to meet high-speed computational needs in solving scientific and other developmental problems where fast number crunching is a major component. To lead the project, PM Rajiv Gandhi turned to a man who hadn’t seen a ‘super’ all his life to build one in double-quick time. But Vijay Pandurang Bhatkar knew all about shortcuts: the country’s top number-cruncher had begun school directly in the 4th standard and still made it to the top. When Rajiv Gandhi met Bhatkar, he asked him three questions:

“Can we do it?”
Bhatkar answered, “I have not seen a supercomputer as we have no access to supercomputer, I have only seen a picture of the Cray! But, yes, we can.”

“How long will it take?”
Bhatkar promptly replied, “Less than it it will take us in trying to import Cray from US.

“How much money it would take?
Bhatkar replied, “The whole effort, including building an institution, developing the technology, commissioning and installing India’s first supercomputer will cost less than the cost of Cray.

Pleased, the Prime Minister gave the go-ahead for the project. Based in Pune, C-DAC summoned scientists from all over the country to work on one of India’s greatest technology projects.

Within three years, the extraordinary happened. With everyone involved working their socks off, C-DAC finally completed its work well within the proposed deadline. With components that could be bought off the shelves, in 1991, C-DAC rolled out India’s first indigenous supercomputer: PARAM 8000. In pic above: Vijay Bhatkar.

For the first time ever, a developing country had pulled off such a feat in advanced computer development. Needless to say, the world was shocked at this achievement. Many were doubtful about PARAM truly being a supercomputer. That’s when Bhatkar decided to take the PARAM prototype to a major international conference and exhibition of supercomputers. Here, it was demonstrated, benchmarked and formally declared a supercomputer. A US Newspapers published the news with headline, “Denied supercomputer, Angry India does it!”

A multiprocessor machine, PARAM 8000 was benchmarked at 5 Gflops, making it the second fastest supercomputer in the world at that time. It also costed a fraction of what the legendary US machine Cray did and performed just as well. So much so, that the US company which manufactured Cray had to slash prices to woo a nation it spurned just eight years ago!

PARAM 8000 also set the platform for a whole series of high-performance parallel computers, called the PARAM series. In 2002, PARAM 20000, or PARAM Padma, broke the teraflop (thousand billion flops) barrier with a peak speed of 1 Tflop. The latest machine in the series are the PARAM Ishan and the PARAM Kanchenjunga. Installed at IIT Guwahati, PARAM Ishan can be used in the application areas like computational chemistry, computational fluid dynamics, computational electromagnetic, civil engineering structures, nano-block self assemble, climate modeling and seismic data processing. PARAM Kanchenjunga, stationed at NIT Sikkim’s Supercomputing Centre, is expected to be used for engineering research conducted by the faculty and students at the institute as well as researchers across the state. Interestingly, Param in Sanskrit means ‘supreme’!

Based on the Param series of supercomputers, Bhatkar has also built the National Param Supercomputing Facility (NPSF). This has been now made available as a grid computing facility through Garuda grid on the National Knowledge Network (NKN), providing nationwide access to High Performance Computing (HPC) infrastructure.  He also initiated moves to have supercomputing in Indian languages and succeeded in doing so.

In 2015, Bhatkar was honoured with Padma Bhushan for his immense contribution in the field of science and technology in India. 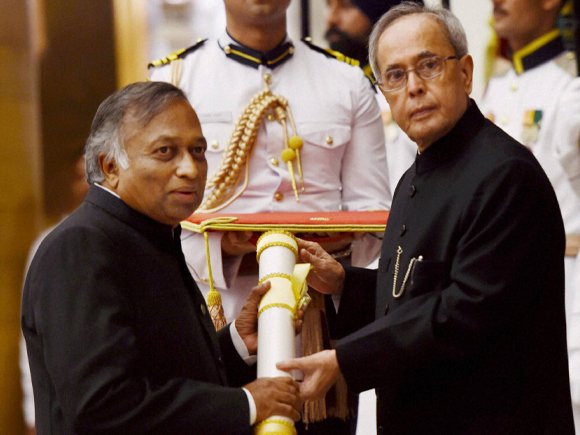 Vijay Bhatkar’s and C-DAC’s efforts in this strategically and economically important area have thus put India on the supercomputing map of the world along with select developed nations of the world. As of 2016, many PARAM systems have been deployed in the country and abroad. Today, India is designing Petascale supercomputers, next only to USA and Japan. The crowning glory of India’s advanced computing and IT capability, once achieved this computer will be a symbol of India’s undeniable position as an IT superpower.

However, while showing great promise in the field of supercomputing, it’s obvious that India needs to do better and it will. The government of India is working towards this and has initiated the Rs. 4,500-crore National Supercomputing Mission. Under the mission, the Government of India empowers an ambitious target of installing more than 70 high-performance computing facilities in the country. These computers will be connected by the National Knowledge Network. The first of these high-computing machines is being built by the Centre for Development of Advanced Computing (C-DAC) and is expected to be ready by August 2017.