Knowledge can change the world, and a visually-impaired but brilliant Belgaum native has the brainpower and the drive to do just that. This warm and friendly young man is using his amazing intellect to bring positivity and hopefulness to everyone he meets.

Knowledge can change the world, and a visually-impaired but brilliant Belgaum native has the brainpower and the drive to do just that. This warm and friendly young man is using his amazing intellect to bring positivity and hopefulness to everyone he meets.

We’ve often heard the words of wisdom, “If one door closes, another one opens.” We come across a number of achievers in our day-to-day lives, but the ones who leave a mark on our minds are the ones who have achievements despite limitations, the ones who are never heartbroken when one door closes. A 22-year-old from Belgaum is precisely this kind of rare and admirable achiever.

Basavaraj Shankar Umrani is a B.Ed student at Athani, Belgaum. Completely blind since birth, Basavaraj has never glimpsed the external world, but his mind sees and interprets things that no normal person could ever perceive. He is gifted with a brain of unparalleled capacity. He has immense memory, shocking levels of perception, and mathematical and analytical skills that exceed even the greatest brains in the country.

Basavaraj Umrani discovered his love of mathematics at the age of eight. Various media houses and people around him recognised him for his extraordinary analytical skills. Basavaraj can perform addition and multiplication of large numbers within seconds, without any aid. He can also accurately tell us the time of the day and the weekday of any date between the years 1900 to 2100. This visually-impaired but exceedingly sharp young man has rightfully been called ‘The Walking Computer’. Basavaraj says that he is very fond of cricket, and remembers all the names of cricketers from a number of countries, along with the statistics of their performances in different matches. His father says that Basavaraj can replicate cricket commentary in both Hindi and English accurately from any number of matches.

Apart from his love for cricket, Basavaraj also recognises currency notes, does programmes on tricks for mathematics and personality development, and pursues music as an added passion.

A long list of awards have found their way to Basavaraj Umrani, including local, state, and national awards. He is a well-known personality in his area, and people around him say that his heart is just as beautiful as his brain is efficient, if not more. No Sight, Only Vision!

Basavaraj Umrani has so much more in store for his future. Despite being just 22, his abilities, thoughts, and words belie his age. He says that he wants to get into the profession of teaching, but not limit it to one place. He expresses a willingness to travel around the country and fill people with hope and positivity towards life.

The zest that Basavaraj Umrani has towards life is rarely found, even in completely abled people. In his case, we could even consider his disability to be a blessing, for Basavaraj lacks eyesight, but is as happy as a man can be. He considers the “walking encyclopaedia”, Shakuntala Devi, his inspiration, and the divine spirits as his strength. When asked how he mastered all these skills and abilities, he repeatedly says that it’s all God’s gift. 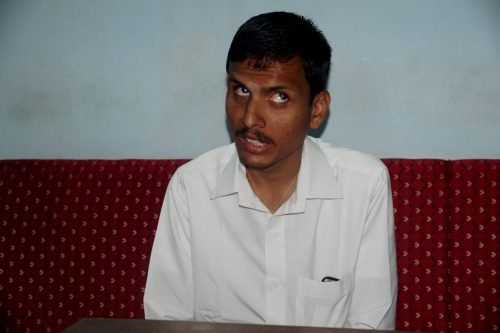 After talking to Basavaraj, it’s difficult not to feel thankful for the benevolence of a Greater Power. Meeting Basavaraj reaffirms your faith in the human spirit, and his innocent smile and strong voice will stick with you for a long time after talking to him, no matter how briefly.