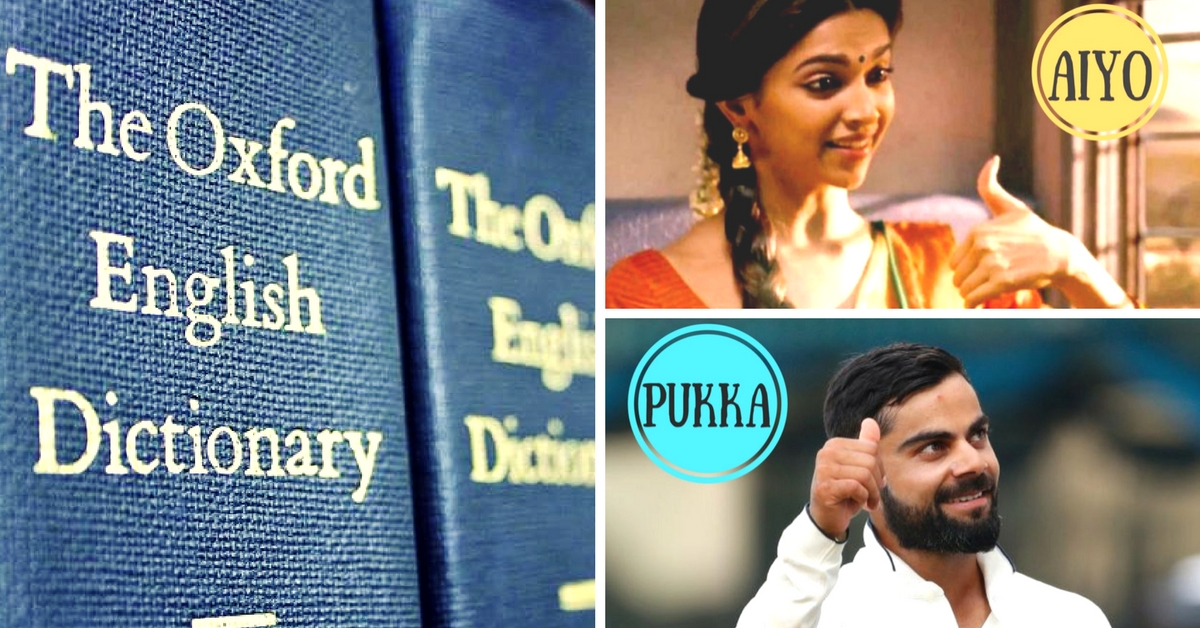 If you are an Indian, you must heard the word ‘aiyo’ – that typical, endearing southern phrase that can easily be a synonym for uh-oh, oh dear or oops (even that doesn’t quite capture aiyo’s breathtaking range). Well, it turns out that ‘aiyo’ is now a legitimate English phrase as well after it was included in the Oxford English dictionary (OED) in 2016, as part of the latest addition of words to its database.

The official website of OED says ‘Aiyo’ was first cited in 1886 in the Chamber’s Journal and later references were attributed to the famed writer R.K. Narayan (“Aiyo! Never thought our  beloved headmaster would come to this end.”[Tiger for Malgudi, 1984]).

However, this is not the first time an Indian term has found itself in this eminent dictionary. Reflecting the global popularity of Indian food, a number of Indian words have been earlier accepted in the Oxford English dictionary. Here are some of them.

Clearly a word of power with a colourful history, Aiyo is an expressive term that seems to have no content and yet is capable of expressing a range of feelings from dismay to derision. The dictionary describes it as: “In southern India and Sri Lanka, expressing distress, regret, or grief; ‘Oh no!’ or ‘Oh dear!’ ”

The dictionary describes the word as it means in Hindi: “a dishonest or unprincipled man.” The word actually originates from Urdu, from Persian bad (evil) and Arabic ma‘āš (means of livelihood).

A popular street food in India, the inclusion of bhelpuri in the dictionary delighted food lovers across the world. The dictionary describes it as: “An Indian dish of puffed rice, onions, spices, and hot chutney”.

Churidar was first spotted in English usage as early as 1880. It took 135 years to officially make it to the English language. The Oxford dictionary defines churidar as “tight trousers made with excess material at the bottom of the legs, which falls in folds around the ankles, traditionally worn by people from South Asia”.

One of the most commonly used Indian words, chutney is described by the dictionary as “a spicy condiment of Indian origin, made of fruits or vegetables with vinegar, spices, and sugar.” From Gordon Ramsay to Nigella Lawson, you’ll see everyone slather their dish with a ‘spoonful of chutney’!

Once merely stopovers for travelers, now destinations unto themselves, it can be safely said that dhabas are a testimony to how far Indians will drive just to get a sip of kadak chai or a bite into generously stuffed paranthas drenched with homemade butter. In the dictionary, dhaba has been included as a noun and is explained as “In India or in Indian contexts: a roadside food stall or restaurant”.

The Hindi word for elder sister, didi has also crept in and made itself at home in the Oxford dictionary. The dictionary describes didi as “an older sister or older female cousin”. Maybe the dictionary will open its arms to the ‘bhaiya‘ soon too!

An oil with a rich history in Ayurvedic medicine, ghee remained India’s culinary star for centuries till it was sidelined in the 1980s by vegetable oils because of its high saturated fat. A word with Sanskrit origins, it is described by the dictionary as “clarified butter made from the milk of a buffalo or cow”.

India has a plethora of masala ( from Urdu word ‘masalah‘) or spices that are ground, powdered, dried, soaked or used as they are, to create some of the most special and popular delicacies in the country. The dictionary describes masala as “a mixture of ground spices used in Indian cooking”.

The word pukka enjoys an unusual status in Britain both as a current slang term and a dusty relic of the Raj. As a London slang term, pukka means first-rate or excellent. The word rose to prominence over a decade ago, when it became one of the catchphrases of the TV chef, Jamie Oliver. But the word’s three descriptions in the dictionary (genuine; excellent; of or appropriate to high or respectable society) are nothing compared to the range of its meanings in India!

A Sanskrit word derived from the term ‘purika‘, puri has been described by the dictionary as “(in Indian cooking) a small, round piece of bread made of unleavened wheat flour, deep-fried and served with meat or vegetables”. After all, if tortilla can have a place in the dictionary, so can the utterly delicious puri!

In the dictionary, the colloquial Indian word, yaar, has been defined as a noun to refer to a ‘familiar form of address: friend, mate’. According to research, yaar was first spotted in English usage in  the year 1963.

Also Read: Did You Know These 17 Common English Words Were Borrowed from Hindi?