Ten engineering students from NIT K are conducting classes on the beach for the children of fishermen who live in settlements close to their campus.

A UNESCO study from July 2016 says that India has the largest number of adolescent school dropouts in the world; a total of 47 million students do not progress to upper secondary school. This study also adds that “a key obstacle to achieving the agreed target is persistent disparities in education participation linked to sex, location and wealth.”

So, the fact that children who live in the coastal town of Surathkal, Mangalore often drop out of school due to lack of financial resources, and coercion on their parents’ part to help out with household chores, is not surprising.

In order to reverse this trend, a group of 10 engineering students from NIT Karnataka have started conducting free evening classes on the beach for children of fishermen who live in settlements close to their campus. 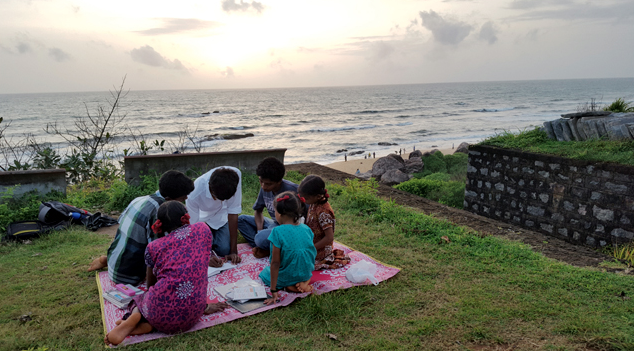 The beach schooling project was initiated at Incident, which is NIT-K’s annual cultural fest. I-Care, a social initiative by the Incident team, roped in underprivileged students from preschool to pre-university, in the backyard of the Sadashiva temple, to teach them academic subjects.

The students launched the pilot project a couple of years ago but it wasn’t very successful so they relaunched it this year on October 15, Dr. Abdul Kalam’s birthday.

One of the student volunteers, Kaushik R Udupi, told Times of India, “Since volunteers left Surathkal after completing their course (a couple of years ago), the classroom for children project fell through. During a visit to the Sadashiva temple, a student pursuing PU course urged NIT-K students to continue the programme. Volunteers signed up to revive the programme.”

You may also like: How a Fisherman’s Son in a Coastal TN Village Became a Surfing Champion & Started a Surf School

The new-age beach gurukul is immensely popular among the students because of the way it seamlessly blends education with extracurricular activities. Apart from learning core subjects like maths, science and English, the students are encouraged to participate in and learn from various activities like stargazing, football, kabaddi, sand art, cycling, etc.

Two children studying in the beach school have represented the district in hockey tournaments. And a family of four has started attending classes, inspired by a child in their household who was enrolled in the programme. According to a press release, a student in Class 4, named Akkamahadevi, now helps out her sister who is in Class 7, with math problems.

As of now, the classes are conducted in the open air; lessons in grammar are read aloud accompanied by the sounds of temple bells ringing and waves crashing. But one of the volunteers, Vishal S, told Times of India that they will construct a hut on the beach for evening school if more volunteers join them.

If you want to help sponsor the construction of huts on the beach for this program, write to: kekuda.akshay@gmail.com