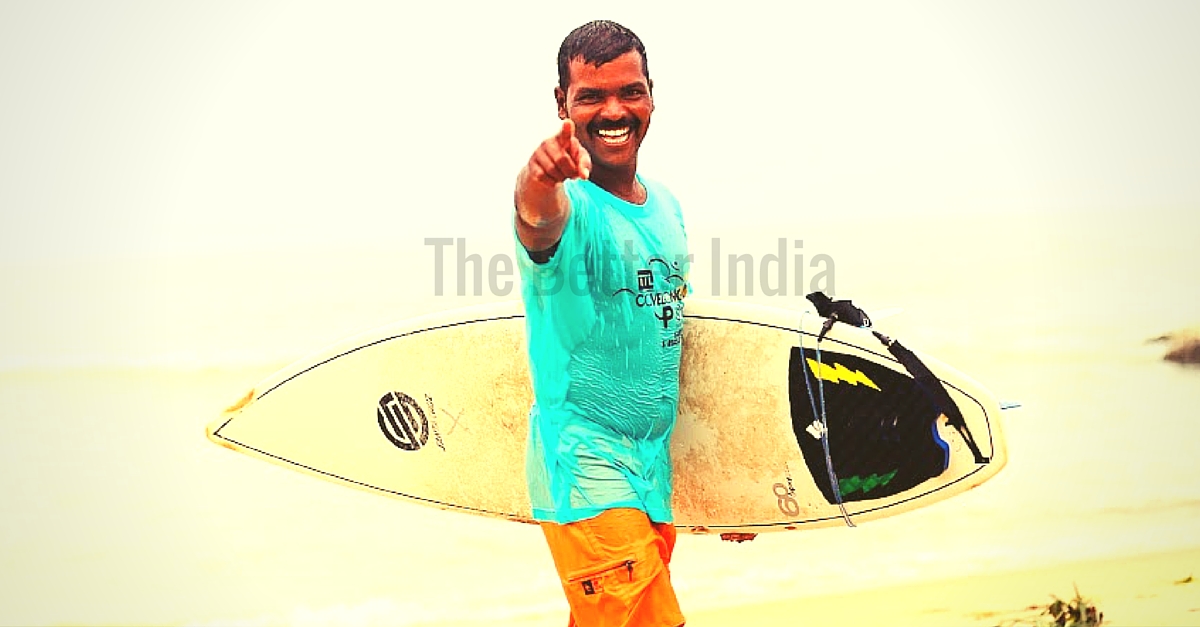 From a undistinguished boy who surfed the waves using flotsam and styrofoam boards, to becoming a champion surfboarder, Murthy Megavan has come a long way. He is at the center of an upcoming surf school serving as a source of inspiration for aspiring surfers, trainers, community builders and humanity – lifting the lives of many, like a rising tide does.

India has a long coastline and plenty of beaches. Citizens of the country, and visitors too, have daily access to many parts of the coast along the Arabian Sea and the Bay of Bengal. Yet, it is rare to hear about water-sports enthusiasts in this cricket-frenzied country. This is exactly why the story of Murthy Megavan is so remarkable.

Born in the late 1970s into a poor fishing family living in a small settlement on Kovalam beach near Chennai (not to be confused with Kovalam beach, Kerala), Murthy dropped out of school in order to provide for his family. His father left the family due to a feud and Murthy had to shoulder the responsibility of providing for his grandmother, mother and sister. This was not unusual then. Many kids in his place and with his background would have done the same.

But it was unusual that the young son of a fisherman didn’t limit himself to catching fish. He wanted to ride the waves.

Kovalam is essentially a fishing village although it is known for its beach culture as well. The daily catch Murthy brought in was just about enough to feed his family. He had nothing in excess to equip himself with in order to indulge his passion for surfing. So, wooden planks and flotsam served as his first surfboards. He taught himself to surf by trying and trying again.

In the beginning, he didn’t know any surfing techniques. Nor did he have a trainer. He simply aligned his body with the plank to ride a wave.

He would practice for hours and observe different types of waves. He says he made mental notes to correct his own mistakes and perfected the art of surfing through sheer hours spent in the sea. He’s not sure if it was his passion for catching waves or his innate ability to ride them that brought improvement.

The person accredited with starting the surf movement in India is Jack Hebner, an American who was drawn to India’s spiritual side. At a time when surfing was unheard of in India, he realized that different parts of the country’s coastline lent themselves well to surfing in different seasons.

Hebner set up a surf school that combined spirituality with surfing, consequently winning himself the nickname ‘surfing swami.’

The surf school Hebner started in 2004 in Mangalore was a key milestone in India’s surf movement. Cleverly combining spirituality with surfing, the surf swami brought a significant number of surfers from the world over to India. The surf movement has been growing since, although slowly. The best places to surf in India are Mangalore, Kovalam in Kerala, Goa, Chennai, Pondicherry, and the island of Andamans. India’s top surf schools are in these places. Every school offers training and accommodation. The trend these days is to combine yoga on the beach before and after surfing to enhance mind-body coordination.

Murthy had the chance to meet the surfing swami at Kovalam beach, Chennai, in 2001. He borrowed the swami’s surf board and took only a few minutes to adapt to it. In just a short time he rode every swell like a pro, showing no traces of having used wooden planks until then to pursue the sport. The swami was instantly impressed. He left his phone number, urging Murthy to get in touch with him. But a not-so-literate Murthy didn’t know the city codes and dial-in format to use that number. So, for a few more years, he continued to remain undiscovered by the rest of the world. But the few minutes spent on a real surfboard inspired Murthy, against his family’s wishes, to use all the family’s meagre savings to buy one.

Fishing and surfing were the dual aspects of his life until Kovalam beach, like the rest of the Coramandel coast on the Indian Ocean, was hit by a tsunami in 2004. Having lived through (or perhaps, surfed through) that natural disaster right at his doorstep, Murthy devoted much of his time towards community building. He enrolled at a local NGO and offered his time to improve the lives of the not-so-privileged around his home.

His family had very little but he says there were many around him who had even less — this motivated him to be a giver.

In the years that followed Murthy’s tryst with the surfing swami, more and more people discovered Chennai’s surf spots — some elite locals, some visiting Australians, a few Israelis, Americans, and Europeans. Every single surfer who came to Kovalam beach noticed Murthy for two reasons: he was a remarkably dexterous surfer and he was a devoted social worker. He had a genuine concern for people and was helping build a self-reliant community despite his own poor economic background.

Naturally, with this ability to make such a fantastic first impression, Murthy struck up great relationships and friendships with people from around the world. Some surfers shared their surf techniques with him, some shared fancy chocolates from their home countries, some gifted him their old surfboards and some went on to use their own professions and talents to spotlight Murthy’s talent.

One of the first surfers to discover Murthy was Tobias Hartmann, a German expat in India. Tobias says, “I met Murthy in the summer of 2007 at Covelong Point, which was very unknown at the time. I had started to surf there with our sons Jakob and Viktor. I remember the second visit, when this young Indian villager (Murthy) ran towards us with an old surfboard under his arm. He was an incredibly stoked surf enthusiast. Mind set on surfing, we shared a lot of waves with Murthy and an increasing number of young village boys who were surfing with anything they could find to catch a wave – timber boards, styrofoam boards – anything that would float. These talented kids were missing a few decent boards. Fortunately, we met Yotam Agam at that same time. Yotam organized a proper surfboard as a present for Murthy. That was the start of Murthy and the Covelong Point surf saga…”

Like a true gentleman, for every new surfboard he received as a gift, Murthy passed on his old surfboard to an aspiring surfer in his village. There were many youngsters in the village who liked the sport but just couldn’t afford surfboards.

This was a boon for the boys at Kovalam fishing village — learning to surf and being able to instruct others opened up entirely new opportunities to support their erratic fishing livelihoods.

Yotam Agam, a well known Israeli entrepreneur in Chennai, took an immense liking to Murthy. He liked the boy’s attitude. He found him ingenious, optimistic and also considerate towards others. Murthy never approached visiting surfers for help or a money loan, which he could have, given the excellent rapport he had with most of them. Instead, he just enjoyed surfing and hanging out with them without any strings attached.

An impressed Yotam Agam offered to make a video about Murthy to share on YouTube — a video that went on to win the young fisherman a lot of fans, both online and on the shore.

Soon, the print media followed with their own articles about this gem of a sportsman and the benefactor hidden on Chennai’s shores. These articles in the local dailies got the attention of many locals who wanted to give the sport a try. Kovalam beach, which is about 40 kilometres from the city of Chennai, gradually saw an increase in their numbers on the weekends.

Visiting surfers came to Kovalam beach looking for Murthy. They loved surfing with him and sharing their stories. More importantly, they loved his story.

A prominent businessman and sports aficionado in Chennai, Arun Vasu, also took notice of Murthy’s talent. Murthy was already on a winning spree then. He had won coveted places in many Asian surfing competitions in Sri Lanka, India and Indonesia, which were hotly contested by people from around the world. He had a growing network of international fans.

Arun Vasu decided to invest in Murthy. This was a huge turning point for the surfer. The patron generously offered to build a surf school around Murthy’s talent and to support it until the school was able to generate its own running costs.

So, Covelong Point Surf School opened its doors in November 2012 (Covelong is an English interpretation of Kovalam).

The surf season in Chennai starts in the pre-monsoon month of April and continues until the end of the monsoon season in September. Covelong Point is an exposed beach and reef break that has pretty reliable surf. Offshore winds are from the west northwest. The ideal swell direction is from the east southeast. Typically, this coast inherits the wave conditions in Bali two or three days later. Waves at the beach break both left and right and there is a right hand reef break too. Surfing here means negotiating dangerous rips but it also means that one can surf a relatively uncrowded peak.

Built with modern facilities, the Covelong Point Surfing School stands testimony to the saying: “Follow your passion and people follow you.” The school offers a lovely view of the sea, a clean and promising restaurant that serves up daily catches in delectable dishes, and a few rooms to accommodate surfers coming from far and wide. In less than three years, Covelong Point has had over 300 students. The school has full time staff to teach kayaking, kite surfing, and wind surfing, besides surfing itself.

Every single teacher in the school is a local fisherman, handpicked and trained by Murthy. These boys – Murthy’s boys –now excel at national competitions!

What sets Murthy’s team apart from other surf schools in the country is its service to the community. Murthy intends to attract sports minded (as opposed to money minded) people with a sense of social service to the community. The teachers at Covelong Point regularly lead beach clean-ups. In the recent past, they also organized health camps and eye check-ups for the locals who have no access to reliable health care. They have a no smoking, no drugs, no alcohol policy to propagate clean and healthy sporting habits. They host a spectacular three-day eclectic music and yoga festival that brings budding musicians, artists and sportspeople together against the backdrop of the ocean, sun and sand.

The school sees a stream of surfers from Germany, Japan, Israel, France, and the US to keep it busy throughout the year. Surf schools like Covelong Point alter the city’s (and even the nation’s) beach culture in significant ways.

In this growing surf culture there are many who ride a wave and some more who can turn the tide in their favour, but very few like Murthy who lift the lives of others.

About the author: Uma loves to travel, write (mostly about unsung heroes and unacclaimed places), indulge in chocolate tasting and debunk ridiculous Asian stereotypes in Europe! When she is not expanding her German vocabulary, she is on her yoga mat. Uma is also a volunteer at the IAHV. She currently resides at Cologne, Germany. You can browse Uma at www.umamuthuraaman.com or follow her on Twitter @umamuthuraaman
Promotion