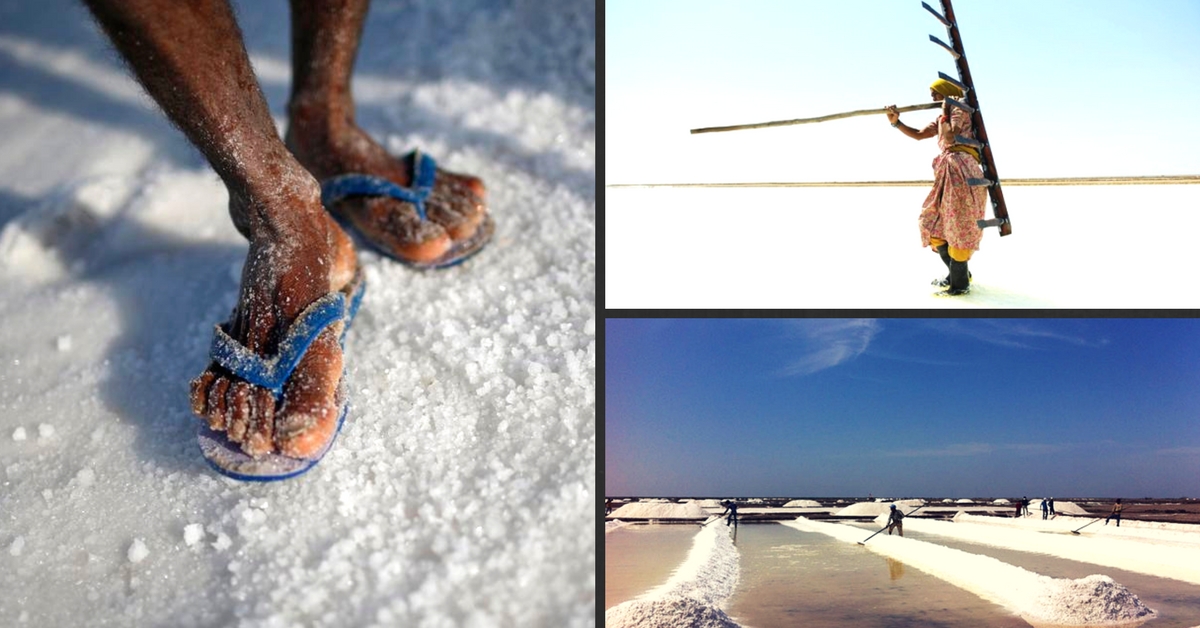 Harsh, yet breathtaking. Three words that aptly describe the landscape of the Rann of Kutch. Situated about 130 km from Ahmedabad, the Rann of Kutch is a seasonal salt marsh located in the Thar desert in Gujarat. It is also the land of the Agariyas, traditionally salt farmers, who have lived here for centuries. Working every day under a scorching sun from October to June, the Agariyas harvest 75 percent of India’s total salt produce.

This is the story of the Agariyas, a hardworking community that makes the desert its home for eight months to extract the whitest salt in the world.

Centuries ago, the Rann of Kutch was part of the sea until an earthquake turned the exposed sea bed into a sprawling desert. Today, it is a vast expanse of arid land, devoid of habitation, stretching out to the Arabian Sea, which is just 10 kms away.

During the monsoon months, the Rann of Kutch is submerged in sea water. As the sea water finally begins to recede in October, the Agariyas move in and begin the elaborate process of salt farming. First, they dig wells to pump out highly saline groundwater from the lake of brine that lies 40 feet below the crust.

Ten times saltier than sea water, this lake of brine is what keeps the economy of the area afloat.

The pumped out brine is then directed into square-shaped salt pans where the natural process of evaporation works to leave behind precious white crystals of salt. Getting these pans ready for this process is tough work. The farmers stamp and level the earth with their bare feet to ensure that the tightly packed soil doesn’t allow the brine to seep back. Some dry branches are thrown in, around which salt crystals form.

With the salt fields slowly turning silvery white with raw salt, the harvest season officially begins in winter. The Agariyas prefer to start their day early to avoid the scorching desert heat – during the day, the mercury can soar up to 40 degrees Celsius, even in December.

Once the first layer of salt is formed, it is scraped with heavy wooden rakes, locally known as gantaras. The salt farmers continuously rake the salt to develop smaller crystals (which fetch a higher price) and pile it up onto the sides of the pans to be collected later. This salt is different from the marine salt produced on the coast and is locally known as Badagara, literally meaning Bada (big) and Agara (pan).  Every 15 days, an average of 12-15 tonnes of salt is collected and sent to salt companies and chemical factories across the country.

Braving the extreme temperature of the barren desert, the community lives for six to seven months in makeshift shacks beside its salt pans. The Agariya children start working in the salt fields from the age of 10 – generational poverty and lack of schools in the Rann of Kutch offer few chances for them to educate themselves.

After the harvest, the families pack up their equipment and haul them back to the village settlements encircling the Rann. The monsoons come and wash their salt fields away, turning the desert into a sea. Four months later, the Agariyas come back and start all over.

Also Read: Nomads of the Himalayas : A Fascinating Glimpse into the Rarely-Seen Forest World of the Van Gujjars

Years of working under such harsh conditions often takes a toll on their health too. Most salt farmers are too poor to afford the right equipment for their work —  while a lucky few have gumboots, most work in flip flops, in socks or barefoot. As a result, the salt and the fierce sun inflicts much damage on their health.

Despite their backbreaking, and often dangerous, labour, the Agariyas earn a paltry sum of ₹ 60 per ton whereas the retail price of domestic salt is ₹ 5500. More than 100,000 Agariyas work in the Rann of Kutch as salt farmers and almost 60 percent of them are living below the poverty line. Most of their tiny profit is eaten up by the fuel costs and spare parts expenses of their brine pumps and generators.

Recognizing that the fluctuating and high cost of diesel was eating up almost 70% of the profits of the Agariyas, the Grassroots Trading Network for Women (GTNFW) or Hariali, an initiative of the Self Employed Women’s Association (SEWA) decided to address this issue to improve their livelihood.

Founded in 1972 by Ela Bhatt, SEWA has been working for several decades to improve the working and living conditions of many women in India’s unorganized labor force, including the women salt farmers of Kutch.

In the early 90s, SEWA begun by holding meetings for the Agariya women to educate them on matters of nutrition and child care. Next, the organisation started bachat mandals (savings groups) and technical training sessions for the salt farmers.

SEWA also started giving credit at interest rates much lower than the traditional middlemen and provided market linkages for the salt that they produced. In 2005, SEWA began conducting training for vocational occupations and micro-enterprises, like agarbatti making, beedi making, etc, to ensure a secondary source of income for the Agariyas during the off season months. The results of SEWA’s effort on these two fronts – financial services and marketing services – were dramatic and many of the participating Agariya families rose out of poverty within two years

In 2012, SEWA decided to introduce solar pumps to lower production costs and provide a clean energy option. In the first program of its kind, SEWA collaborated with Jaypee Solar, a local provider of solar PV systems, to install solar systems designed for brine pumping applications.

They next partnered with SunEdison, a U.S. based renewable energy company, and the World Bank to distribute 200 solar-powered water pumps to the Agariyas in 2015. Till date, SEWA has replaced more than 232 diesel pumps with hybrid pumps that run on solar power during the day and on diesel for four hours in the night.

Rann of Kutch’s abundant solar energy potential, with nearly 300 sunny days and high solar radiation, offered salt farmers the opportunity to dramatically increase their annual savings by switching from diesel to hybrid pumps that are able to run for 8 or 9 hours per day on solar power. These hybrid pumps have halved the expenditure on diesel and increased the salt production by approximately 15%. Moreover, installing these solar panels on the roof tops of the farmers’ homes during the off season has helped them save on their electricity bills too. Each of these pumps also saves 2.7 tonnes of carbon dioxide emissions per year!

You May Like: SEWA Rural – Taking Development To The Poorest Of Poor In The Remotest Of Remote Villages

SEWA also teamed up with the Global Fairness Initiative (GFI) to distribute 15,000 solar powered LED lanterns to the salt farmers of Rann of Kutch. Safer and far brighter than kerosene lamps, these solar lamps don’t require additional spending once the lamp has been purchased as their batteries last as long as 10 years.

Women members of SEWA also run their own Shakti Packet programme to provide food grains and other essentials to families like themselves in the barren desert. Bought in bulk, the prices of these goods are cheaper than those from the stores in the nearest village, several kilometres away.

SEWA next plans to eventually replace all the 17,000 diesel pumps owned by its Agariya members with hybrid solar pumps. For this, it has tied up with ICICI Bank, India’s largest private sector lender, to enable salt farmers to buy and install up to 600 solar water pumps through yearly installments. SEWA is also working with Zynergy, a start up firm in Chennai, to address the problem of corrosion in traditional pumps made of iron or alloy.

As Mr. Bhatnagar, the CEO of Grassroots Trading Network for Women (GTNFW), says,

“Because the salt farmers live on such small margins, I want to ensure that the solar pumps are a sound investment and have minimal risk.”

Trying to carve out a living in one of the harshest environments imaginable, the hardworking Agariyas do not want to give up salt making. They love the freedom of their simple life and only want better health, economic and educational opportunities for their families. With greater savings from using solar energy, these farmers are now one step closer to a future marked by a better economic status and sustainable livelihoods.

To know more about SEWA’s work, you can visit their website here.