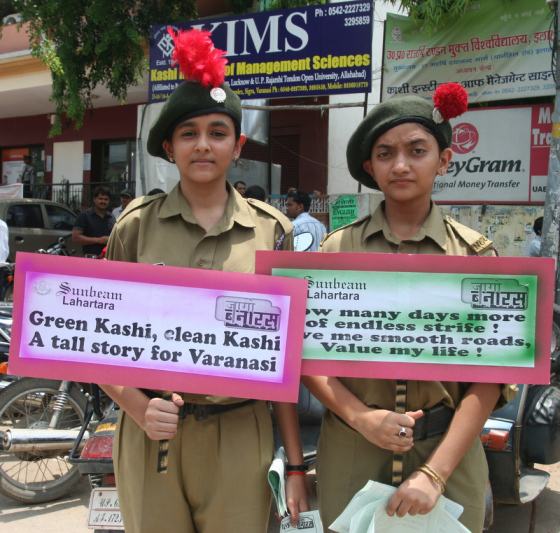 A great citizens’ initiative in Varanasi is trying to awaken a sense of civic awareness among the residents and tourists, and taking steps to bring local issues to the notice of the authorities in charge. This is ‘Jago Banaras’ – and it would be so easy to implement it in your city or neighbourhood as well!

Varanasi (Banaras), popularly known as Kashi among Hindus, is considered as the most sacred and holiest of Indian cities. It is said that death at Varanasi brings salvation to the soul. Banaras is also one of the oldest inhabited cities in the world. The city is a major tourist attraction for both Indians and foreigners. Kashi is known for its rich cultural heritage, temples and ghats. It is the home to one of the most sacred Jyotirlinga (a shrine where Lord Shiva is worshipped in the form of a “Lingam (pillar) of light”) for Hindus, the Kashi Vishwanath temple and is often called as Lord Vishwanath’s home. Besides, it is also an important seat of learning. Varanasi is the site of the highly prestigious and one of the largest residential universities of Asia, Banaras Hindu University.

With the advent of modernism, the state of the city has witnessed tremendous change. The city is struggling amidst garbage and filth. The holy Ganges, which flows through the city’s ghats is also getting impacted by high filth and pollution levels. It appears that it has become a dumping ground both for the tourists who visit the city as well as the residents. In such a scenario, ‘Jago Banaras’ is doing its bit to keep the city clean and pollution-free.

‘Jago Banaras’ is an initiative started by the residents of Varanasi themselves. Hundreds of school children are part of the various campaigns under the initiative, which gives a greater visibility to the issues. The objective of the initiative is to draw the attention of the government authorities towards the pathetic condition of the roads with garbage scattered everywhere and other basic civic amenities including sanitation.

The initiative is a result of collaboration between Varanasi Vikas Samiti (VVS), a forum of local residents, and different schools and social and voluntary organisations in the city. The team at ‘Jago Banaras’ is using various social media channels to popularise the movement further. Local newspapers carry news on the initiative’s progress. Recently the team urged the residents of Varanasi to post/send images and videos of garbage and bad condition of the locality they live in or their surrounding areas. This was widely publicised through local and social media. The monitoring committee at ‘Jago Banaras’ planned to use these in the High Court as evidence. As a result, the team received a huge positive response from the people of the city as well as the frequent visitors. A large collection of photos, especially, video recordings of statements of citizens and affidavits of at least 40 different persons from different localities were put before the Hon’ble High Court with newspaper cuttings to show the reality that not much has been done by the local authorities to improve the state of the city.

As the fight for a cleaner Kashi still continues in the Court, the initiative is being received as a movement filled with hope and action for the residents of the city, who crave for fresh air and cleaner roads. By supporting ‘Jago Banaras’, we would be preserving the rich heritage as well as the environment that our ancestors passed on to us. In order to bring the desired change, the residents of the city and the tourists who visit this sacred place, should ensure to opt for more bio-degradable products and not to throw garbage such as plastic bottles and bags irresponsibly. The message is quite clear – It’s easy to go green- Reduce, Reuse and Recycle!

Kanchana is an expert in marketing communications with experience in diverse industries and organizations like Bank of America, Business Standard and Risk Management Solutions Inc. She has been a leading participant in several business forums both in India and abroad. Kanchana is also an avid writer and is a regular contributor to various web media on topics of varied interest.
Promotion