In Pictures: A Railway Station Comes Alive with the Brushstrokes of Children and Adults Alike

An art camp was organised at the Bhubaneshwar railway station, with a view to spreading awareness about the need for cleanliness in the Railways. Children and adults alike were seen using paints and brushes to bring alive some very attractive images. Here are the pictures.

An art camp was organised at the Bhubaneshwar railway station, with a view to spreading awareness about the need for cleanliness in the Railways. Children and adults alike were seen using paints and brushes to bring alive some very attractive images. Here are the pictures.

Residents of Bhubaneshwar, and those travelling to or from the city, got a chance to see the city railway station being transformed with bright colours. Vivid images – centered around the themes of cleanliness, awareness, service, and volunteerism – took shape on the walls of the station, attracting an appreciative audience.

The occasion was an art camp being conducted at the railway station on Oct. 13, 2015. Organised by Bakul Foundation, a city based NGO that works in the fields of environment and education, the camp received a great response. The camp took place in partnership with the East Coast Railways (ECoR), Khurda Division.

The theme for the camp was Swachh Rail, Swachh Bharat – a topic that always strikes a chord with participants these days. Age being no bar, about 70 school children as well as adults got together to showcase their talent – a long stretch of wall in the railway station was their canvas and they let their imagination lose.

The entire camp was facilitated by Bakul Foundation volunteers and was led by Satyabhama Majhi, one of the most promising young contemporary artists of the state. Here’s a look at some of the participants and their work: 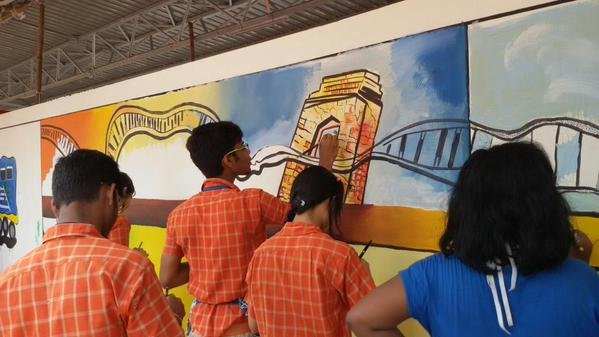 For the love of mother nature… Let’s remember to use the bin when we are at a railway station next time? And as the message here says: don’t use the walls as urinals. Please? Bakul Foundation and East Coast Railways had organized a similar art camp in 2014 as well, where participants painted to create awareness about water conservation.