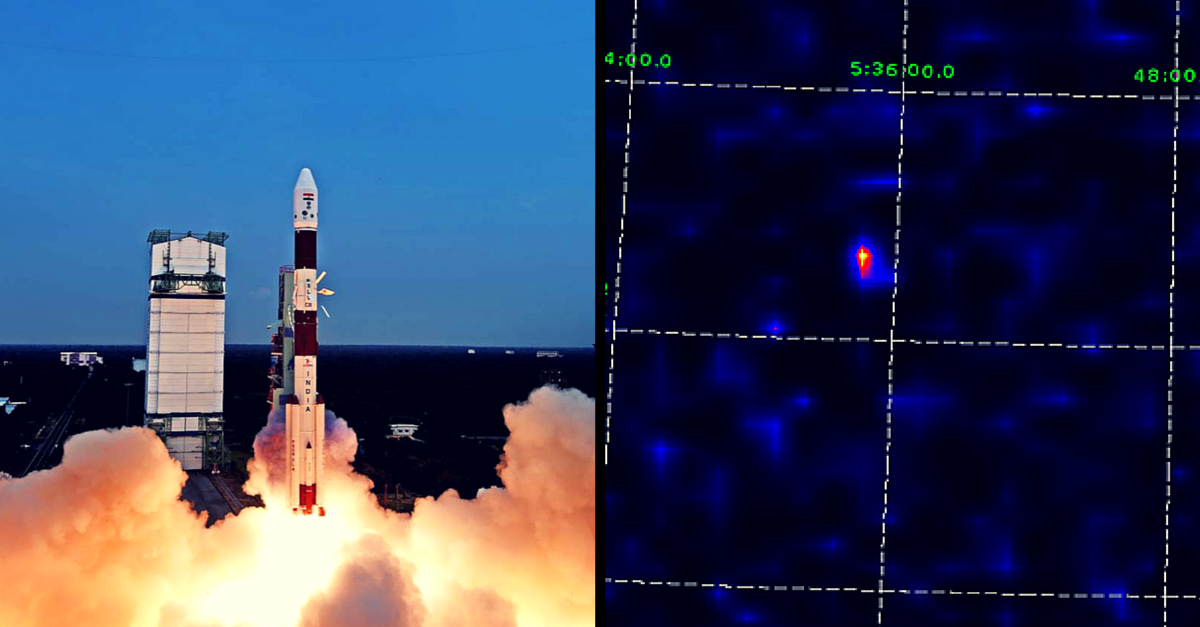 India’s first multi-wavelength space observatory, ASTROSAT, was launched into a 650 km orbit on Sept. 28, 2015, by Indian Space Research Organisation (ISRO). The satellite has started its work and has begun to capture images well. The first light image by ASTROSAT is already here – find out what it looks like.

It is a light image of Crab Nebula, which is the brightest hard X-ray source in the sky.

Hard x-rays are high energy x-rays and because of their penetrating ability, they are used to obtain images of the inside of objects like in medical radiography and airport security. Crab Nebula is the remnant of the supernova (a stellar explosion) that was recorded in the year 1054, and it is found in the constellation Taurus. It is often used to calibrate hard X-ray detectors.

ASTROSAT, an astronomy observatory, is a place from where India can study different cosmological phenomena. It is meant to observe distant celestial objects and gain a more detailed understanding of our universe. One of its missions is detecting new, briefly bright X-ray sources in the sky.

Thus, the satellite was oriented towards Crab Nebula on October 6. This was after one of the five payloads on board ASTORSAT was made operational. It is called the Cadmium Zinc Telluride Imager (CZTI) and is meant for hard X-ray detection.

The CZTI is sensitive to X-rays above 10KeV energy.

According to the official ISRO release, “For every photon it detects, CZTI sends an event report consisting of position (pixel number, each pixel – 2.5mm X 2.5mm), time of detection (correct to 20 micro-seconds) and energy of the incident photon…This is the first time ever that a hard X-ray instrument acting as a particle tracker is sent to space.”

Crab Nebula was not detected in the first attempt, even though it is the brightest hard X-ray source and is visible even to small detectors. It was finally detected on Oct. 9, 2015.

After analysing the data, scientists at ISRO understood that the nebula could not be detected at the first attempt because, at the time, the satellite was passing through the South Atlantic Anomaly (SAA) region, which is a region that can produce glitches in astronomical data because of exposure of satellites to higher-than-usual levels of radiation.

“SAA avoidance zone was deliberately kept wide to protect the instruments, and detectors were switched OFF in this interval during the initial days of ASTROSAT operation. When all the data were systematically analysed and data were selected based on the availability of Crab in the detector field of view, one could see the Crab emerging from Earth’s shadow,” says ISRO.

In the next few weeks, all other X-ray instruments onboard ASTROSAT will be made operational to observe interesting star phenomena.