‘I Lost 31 KG in Four Months While Eating Ghee! Here’s My Fitness Regime’ There are a myriad of reasons that inspire one’s breakthrough weight problems for people. For 26-year-old Prakshi Talwar, it was a career choice.

A practicing dentist in Delhi, Prakshi had always been aware that her weight was above the healthy normal. “I tried dieting every now and then, but didn’t persevere with it to see a change through,” she shares.

But in 2018 she applied for a position in the Army Dental Corps and suddenly her 97 kilos posed a major hurdle in bagging the position. While she passed the interview with flying colours, the first round of medical examination flagged her Body Mass Index (BMI).

She had only four months until her physical examination. But undeterred by the time crunch, Prakshi decided to use this opportunity and ended up losing 31 kilos.

“When you have a chance to be a part of the country’s defence forces, you do everything you can to keep it,” she tells The Better India.

With a Touch of Ghee

This time, her agenda was simple — eat small portions of home-cooked meals and work out to shed excess unhealthy fat.

Working at Apollo Hospital back then, Prakshi knew enough about basic nutrition to come up with a regimen for herself. For any doubts, she’d connect with her friend and colleague at the hospital, Veena, who is a certified dietician.

Her mother prepared each dish for her, which would invariably be cooked in ghee. “I have a low blood pressure problem, so it was important to get proper energy even if I was eating less. Having ghee-rich foods provided me with the necessary fatty acids and also made the food delectable enough to appease my senses,” the Delhiite says.

For breakfast, she had dishes like porridge, poha or egg whites. Lunch was invariably a light salad of chickpea, corn cob or other vegetables. For dinner, Prakshi would stick to a bowl of pulses cooked in ghee.

Commenting on her diet, she says, “I am a vegetarian, but I knew that if I wanted to see a drastic change, my diet had to change. For this reason I decided to go the extra mile and start eating eggs as well, for every food has its own nutritional value.”

The meals were complemented by a fitness regime that was recommended by the doctors at the army hospital during her examination. This meant that Prakshi began her day with yoga and jogged for 8 km. “This I did in two rounds — a 4 km lap before work and a 4 km lap after,” she adds.

Results began to show quickly, and made her believe that she was on the right track. She shares that everyday she would record her weight, and even the slightest shift in the numbers would motivate her.

“But the major driving force remained the dream of making it to my ideal job,” she reveals.

Apart from all this, Prakshi focussed on hydration. She would consume about seven to eight litres of water every day and carry Oral Rehydration Solutions (ORS) to work. She also says, “I realised that sweet lime juice helps in reducing water retention and burning calories. This was also something that was recommended to me at the army camp, and it worked.”

By month four, her weight had come down to 66 kilos. She achieved an all India rank of 25 at the army examination but didn’t end up joining due to kidney stones that were discovered during her final round. 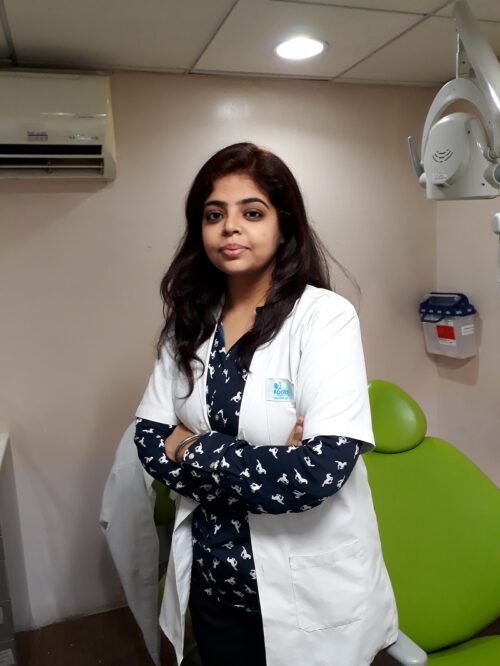 She is currently working at a dental clinic in Delhi.

Lessons From My Weight Loss Journey

Prakshi reveals that even though her transformation was brisk, it wasn’t easy.

While she was persevering to cope with a major lifestyle change, her intrinsic belief took a hit when the efforts suddenly stopped showing results. After shedding the first 10 kg, daily recordings stopped reflecting a drop in her weight for a week.

“It’s called a weight loss plateau, and I was suffering from it. But it is said that in such phases you need to change something in your routine to get the body to respond. I increased my carb intake and switched to High Intensity Interval Training (HIIT) workout then. Thankfully, it worked and I started shedding weight again,” she shares.

Apart from this, she chose to indulge herself in cheat meals only every 15 days, which were also home-cooked. She says that one never knows what kind of oil is being used in food outside, so it’s best to make whatever you desire at home where you know the ingredients are fresh.

For those beginning their weight loss journey, Prakshi recommends taking things slow. This is because the faster you trigger a positive change, the more susceptible you become to an intense relapse.

“I was bound by necessity to take such drastic measures, but I would recommend that one should only follow such a regimen if they plan to stick to it long enough for the body to get used to it. Otherwise, a relapse can cause you to gain even more weight. It’s always better to begin small and make one small change at a time,” she says.

She adds that losing weight and being healthy is not about anything else but harnessing the power of one’s mind.

“I recently suffered a major injury as I fell down from the stairs. Chances of a quick recovery looked grim in the beginning, but today, my doctor tells me that because of the healthy condition of my body, my muscles are healing faster than expected,” she reveals.