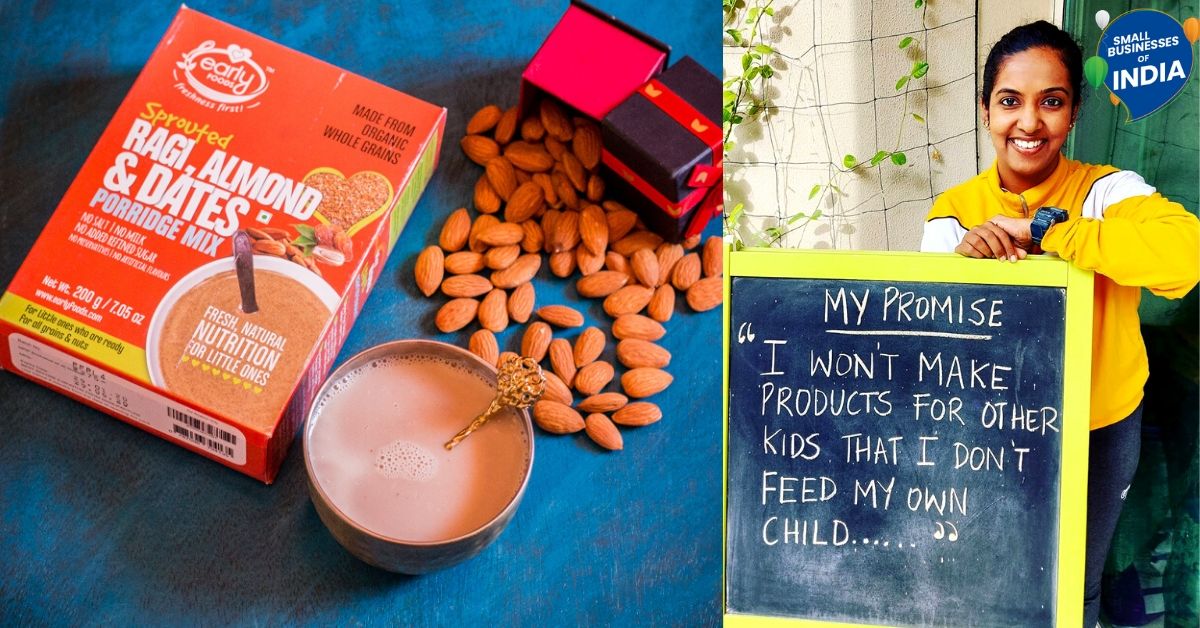 Shalini was stunned to find out that there weren’t too many healthy options for baby food that she could offer her child.

Motherhood can be a daunting, exciting and fruitful experience all at once. Becoming a parent entails a lot of responsibility, where you need to make the right choices and do what is best for your child.

Naturally for Shalini Santosh Kumar, becoming a mother in September 2014 was nothing short of a life-changing event.

After working tirelessly in the corporate sector for seven long years, the expecting mother took a break and moved to her parent’s home in Pune after her child’s birth so that her parents could lend a helping hand with the newborn.

Searching for Healthy Baby Food Options for her Son

As a new mum, she started paying attention to what her son was eating. She knew she wouldn’t always be able to make home food for him once she started working again.

“I knew it would be impossible for me to juggle work and ensure my child is getting the right nutrition from the right ingredients. So, I started looking at what was available in the market,” recalls the 35-year-old mom.

Shalini was stunned to find out that there weren’t too many healthy options that she could offer her child. “I was especially looking for millet-based food, which is actually a superfood. Even pediatricians recommend that you include it in your baby’s diet. But far from finding baby food with healthy ingredients, most of what was available was full of preservatives,” she says.

Also, this was the first time in seven long years where she had the time to take stock of things and question herself if she really loved what she was doing professionally.

“I was so caught up in the daily grind, working almost 12 to 15 hours at a stretch, that I forgot to ask myself if I was truly happy,” confesses Shalini. The will to do something meaningful and the wish to provide toddlers with healthy food coalesced.

Thus, in August 2015, with an investment of Rs 1 lakh, she founded ‘Early Foods’ – an organic baby food business for which she came up with five types of porridge mixes made using different kinds of millets, cereals and dry fruits. She started selling these in small numbers to her circle of friends and acquaintances with children.

The initial five mixes of porridge have now increased to 25 different products including teething sticks and different types of cookies. She also came up with a range of food for expecting mothers so that they get the nutrition they need in this crucial time.

Starting out by catering to 40 orders on an average in a month, she now gets 30,000 orders monthly!

Becoming an entrepreneur was never really on the cards for Shalini who pursued a specialisation in Material Science Engineering from National Institute of Technology, Trichy in 2007.

However, she never really gained any work experience in this field. Instead, fresh out of college, she started working in the corporate sector. Here, she provided consultation services related to Data Analytics. She worked here until 2012.

She got married in the same year and shifted base to Mumbai. Once she was settled, she got a job at eClerx, where she again worked on analytics for clients working in the e-commerce space. It was during this time when she discovered the happy news that she was expecting and she decided to quit to rest and take care of her health.

One would expect the process of transition to an entrepreneur to be seamless for the mum since she was so passionate about the work. But, she faced her own set of challenges navigating the market of baby food.

Here, Shalini informs that her mother Vijayalakshmi has been a guiding force throughout.

“My mother has been really instrumental in my understanding of healthy and organic food. Since I was a kid, my mother would go to local bazaars and buy all the food at home from only select vendors or shops. Being an only child, I would often tag along with her on these shopping trips,” smiles Shalini.

Her mother has not only helped her develop the recipes but continues to play an important role in managing the business operations for Early foods.

Taking One Step at a Time

Shalini decided to start operations for Early Foods from her parents’ home, where she was living at that point.

“The ground floor of the bungalow was sectioned out and transformed into a small unit. I bought two pulverisers and hired two women from the neighbouring village to help me come up with our samples,” informs Shalini. Currently, she provides employment to a total of 23 such women.

When it came to the composition of the mixes, she consulted with pediatricians from Pune and family friends who practiced the profession.

“The doctors helped us understand what ingredients are suitable for which age bracket. For example, between six to eight months, toddlers should not be given nuts. While, toddlers over the age of eight months actually need nuts in their diet which provides them with the energy for crawling,” she says.

She also started looking at vendors who were selling different kinds of organic millets. She zeroed in on a vendor from Bengaluru who was selling these grains grown by organic farmers and started buying from him.

Once the samples were ready, she consulted with nutritionists and a food technologist who analysed the porridge mixes.

“They helped us in selecting the right ingredients, balancing the flavours, and in ensuring the freshness of the products sans preservatives,” says Shalini.

The interesting thing about the porridge mixes is that they are prepared depending on the development stage of the child.

Once they got the Food Safety and Standards Authority of India (FSSAI) certification, she started selling the products in small batches to her contacts through WhatsApp.

As the orders started growing in number, the entrepreneur launched a retail website.

Don’t feed your baby what is older than them

An important aspect that Shalini paid close attention to was ensuring the freshness of the products.

“I read somewhere that one must not feed the baby anything that is older than the toddler’s age. And, that really stuck with me,” she says. To achieve this, 90 percent of the sales are through online channels barring a few select retail shops.

Unlike most food businesses, Early Foods does not really stock their products. “We prepare the mixtures only once we get an order. After that, it’s shipped and reaches the customer within five days to a week depending on their location,” she informs.

Gradually, Early Foods also brought out a new range of products so that they could target a larger demographic. In late 2016, she launched a range of millet based cookies with other ingredients like amaranth, jaggery and dry fruits.

“As my child was growing and was moving towards solid foods, I realised that healthy cookies would be a good option for him as opposed to eating snacks that contain preservatives. So, we got in touch with a local baker in Pune and after months of experiments, we came up with a recipe that did not contain any maida,” she says proudly.

Shalini also thought back to her time during her pregnancy when she had intense cravings. Personally experiencing a gap in healthy snacking options as a pregnant woman herself, she launched a range of cookies consisting of ingredients which were a natural source of iron, folic acid, calcium and protein.

For Dr. Sayali Butala, these cookies got her going during her second pregnancy. The Powai-based doctor met Shalini at a pre-natal yoga class. She was one of the first people to try out Early Foods’ range of products and hasn’t looked back ever since.

“I would keep munching on their cookies when I was carrying my second child. Even my children love the cookies that they have on offer. In fact my first born who is about four years old now took their chocolate cookies to a school event and they were a big hit,” she says.

Challenging times and the way forward

Shalini’s day starts at 5 in the morning and she is busy with her son until 6:30 am after which he leaves for school. Once she is done with her morning yoga and breakfast, she spends time with her employees, looks at the orders and the list of mixes that need to be prepared.

Achieving 30,000 orders a month didn’t come easy for the first time entrepreneur. Shalini says that with zero experience in the food business, navigating the different aspects starting from packaging, certifications to licenses, has not been easy. It is only over the due course of time that she has understood all the nitty-gritties related to this sector.

“Another challenge we face is finding the right people to work with us. Since, most of the people we work with are women from neighbouring villages, there is a visible gap in their skill levels. Upskilling them and also ensuring they follow our production protocols is very challenging. But with patience, we have been able to train them over time,” says Shalini.

Shalini’s determination has paid off as her work was recognised by two awards last year. The Ministry of Skill Development and Entrepreneurship awarded her for starting out with an investment of rupees one lakh and building a successful business. While the Indian Institute of Millet Research recognised her efforts in supporting organic millet farmers in Karnataka.

From her experience, Shalini shares a few words of wisdom for budding entrepreneurs.

“Start out small and be comfortable with that. Having a plan in place is always ideal but do not get stressed out when things don’t pan out the way you have expected. Take one step at a time as there is no hurry. Never be afraid of competition and do what you feel is right. Most importantly, what you do should make you happy,” she says.

So, what does the future hold for Early foods?

Shalini informs that in the next three months, they are gearing up to launch 10 more millet-based products to the existing range. They are also experimenting with the brown top millet as they have never used it before.

“An awareness of the importance of a healthy diet is what we have always focussed on. Through Early Foods, I want to spread the message that traditional grains like millets can do a world of good for the health of your baby and your family,” she signs off.

*New tech that can transform the future of small businesses
Ans: E-commerce and WhatsApp

*One value that can help small businesses thrive
Ans: Quality

*Your favourite book
Ans: I am currently reading the Bhagwad Gita

*In my free time I ____…
Ans: Do yoga and research on healthy food trends

* Before this interview I was ____…
Ans: Planning my social media content.

*Something they don’t teach in college but is important to run a business is
Ans: Accounting and how to have the right mindset while running a business.

*One question I always ask people while hiring is ____…
Ans: What they do in their free time.

*Best advice you ever got is to ____…
Ans: Do your deed and the rest will follow.

Also Read: For This Assam Entrepreneur, Bamboo Is No Less Than Green Gold. Here’s Why