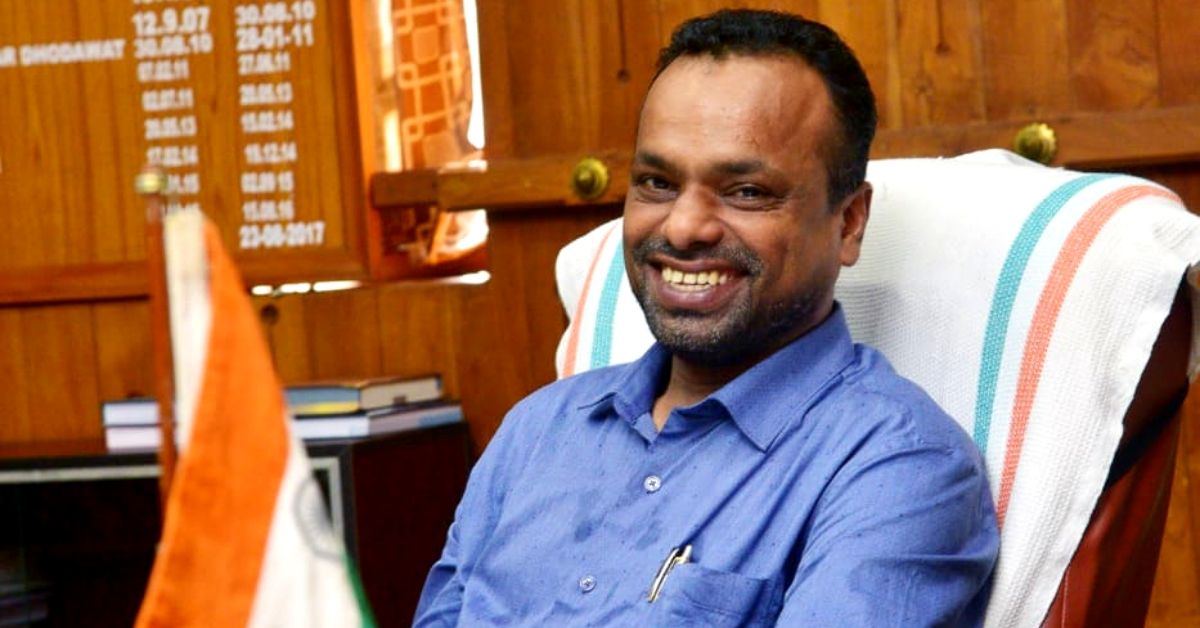 “I would sneak out from the orphanage and travel some 30-40 kilometres to Kannur. Here getting jobs in hotels and restaurants was easy for a young boy like me,” says the IAS officer who also worked in STD booths and as a delivery boy.

Till the age of 17, Abdul Nasar B grew up in an orphanage and in the twelve years that he lived there, he ran away from the place twice, only to return out of concern for his mother.

Today, 32 years later, Nasar has assumed the office of the District Collector of Kollam, Kerala.

His fascinating journey from a shelter home in Thalassery, Kerala, to becoming an IAS officer is an inspiration to those facing grave challenges in their lives.

Nasar was just five years old when his father passed away, leaving his mother to feed six children. Manhumma, unlettered herself, wanted her children to study well to get good jobs. To achieve this, she worked odd jobs in Thalassery to support the family. For a widowed mother looking after six children while balancing work was certainly not an easy task and on the insistence of well-wishing relatives, she decided to send her youngest, Abdul, to a local orphanage.

“My parents worked tremendously hard to provide us with a good life. As a child, I did not really struggle as much as my mother did.

I was just five when I was admitted in the Thalassery orphanage and did not know a life of struggle from an easy one. My elder brother and four sisters stayed with amma, helping her in sustaining the family. My sisters worked as beedi (a cheap cigarette) worker with amma while my brother did labour work. As a family, it was decided that I must focus on my studies,” Nasar recalls in conversation with The Better India (TBI).

It was a confusing time for Nasar who was too young to understand this estrangement. But, he tried to adjust to his new environment, and made the most of his day classes. The orphanage had in-house primary and high school classes, and so, Manhumma was granted her wish of seeing her son getting an education. Five years later, an IAS officer visited the shelter and inspired Nasar in a way that no one else had before.

“The IAS officer was the smartest person I’d ever met then. He walked with unflinching confidence and a slight gesture by him was enough instruction for those around him to understand what he wanted. To a child of just 10 years, this grace was beyond anything I could ever imagine. At that moment, I decided to become an IAS officer someday,” he shares.

Amitabh Kant was only two years into civil services when he visited the Thalassery orphanage and inspired the then 10-year-old Nasar to follow in his footsteps.

A 1980-batch IAS, who is currently the CEO of NITI Aayog, Kant, in his long-standing career as a civil servant, has led several tourism campaigns like “Incredible India” and “God’s Own Country”- a description of Kerala that remains popular till date. He also conceptualised a campaign that made every field in the tourism industry a stakeholder in grooming India’s tourism image internationally. From immigration officers to taxi drivers, Kant made everyone an equal participant in boosting the country as a favoured tourist spot. This campaign, with its wildly popular tagline, “Atithi Devo Bhava”, is familiar to all.

However, in the years to come, as the young Nasar became more interested in earning money, the dream to become an IAS officer faltered many times. “I would sneak out from the orphanage and travel some 30-40 kilometres to Kannur. Here getting jobs in hotels and restaurants was easy for a young boy like me. I would work for a couple of days and when something went wrong, like the restaurant owner scolding me for no reason, I took my wages and left for the orphanage. At that time, I wasn’t keen on completing my education but my family was adamant. I knew this came from their love for me and I obliged.”

Working part-time as an STD booth operator, newspaper distributor and a delivery boy, Nasar saved money to buy books needed for his BA and MA degrees in English literature.

After completing his education, in 1995, he got a job as a Junior Health Inspector with the Kerala Health Department. This was also the year when Nasar got married to Ruksana, a woman who pushed him further to pursue the civil services.

“Amma was the first woman who encouraged me to keep studying even as my determination faltered and Ruksana was the second. She kept insisting that I should be a Collector and pushed me to do better than I was doing. That year, the Kerala State Civil Service Executive had invited applications for the post of a Deputy Collector. There were going to be thousands, if not lakhs of applications and although I had studied, I was sure that I wouldn’t be selected. God had other plans though and I got through!” the 49-year-old recalls.

You may also like: An Alcoholic Dad & Single Mom’s Struggles Pushed This Kerala Man to Crack UPSC

The training, probation and his appointment at a junior time scale position took about 10 years to complete and Nasar was appointed as the Deputy Collector in 2006.

Eleven years later, in October 2017, he was elevated to the position of an IAS officer, as the rules dictate. With this appointment, Manhumma’s years of labour had finally borne fruit. She had always wanted to see her children secure respectable jobs but sadly when Nasar became an IAS officer, she was not alive to see the blessed day. Manhumma had passed away in 2014.

“My mother was the most loving woman and it is her struggle and determination that has brought me to this point. Today, as I assume this prestigious position, my family is super proud of my achievements but it is them to whom the credit goes. Without their encouragement and insistence, I would never be an IAS officer,” says Nasar.

Just last month, Nasar was appointed the collector of the coastal district of Kollam. He takes this position with much pride even as he wishes that his late mother could see how far her youngest, the little boy who lived in the orphanage, had come.