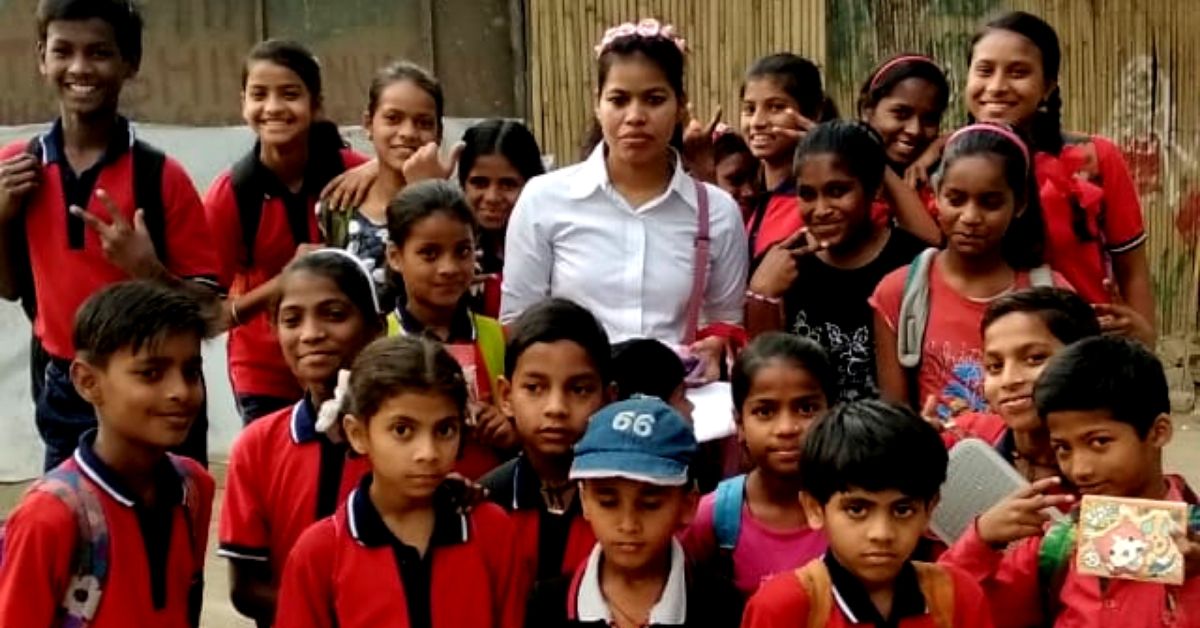 As a child, she was forced to beg and was molested by strangers. Growing up, Neetu Singh was determined that she will change the fate of slum kids who were trapped in a situation similar to hers.

Enduring the sweltering heat, the class of 30-odd students is reciting their math tables diligently. For the students dressed in hand-me-downs, the rising temperatures are of no concern. The learners giggle at the boy who makes an error in the flawless recitation and then move on to writing down the tables on a slate. Neetu Singh’s students are nothing if not dedicated to their make-shift school.

Neetu has endured over two years of threats from goons, uncooperative police and extreme depression to be able to afford an education for the kids in her neighbourhood. For Neetu understands the worth of the written letter.

Growing up in Delhi slum and for a brief time, begging for money in a nearby temple over, two decades ago, Neetu was in the same shoes as the children she teaches.

Some people were generous enough to hand Neetu a few coins. But then there were those who, on the pretext of lending help to the little girl, touched and molested her.

On some days, the meagre income that Neetu brought home would fill her heart with pride, but sullying this happiness were the lecherous advances of strange men she had endured.

Even as a child, Neetu knew that education would be her only way out of this endless tunnel of darkness. It was by no means a short term goal, but nothing could falter her determination.

“Growing up in Delhi slums, I know how exhausting it is to manage studies with the pressure of contributing to the family income. I wasn’t the brightest of students in my class but that wasn’t an obstacle to my dreams. My schooling was done in government schools whereas I finished my Bachelor’s in Education from Haryana. I didn’t have unconditional support from my parents initially but thanks to the wonderful teachers I had in school, I could complete my education,” Neetu tells The Better India (TBI).

Since she had free access to government schools, her parents, although reluctantly, had sent her school. From primary school to high school and then college, Neetu made her slow but steady way to get a worthy degree in hand.

Neetu’s first job after completing her B.Ed was as a guest lecturer in a high school in Delhi for visually-challenged boys. With utmost dedication, Neetu devoted months teaching her students.

From the time that the young Neetu had decided to educate herself to free her family out of the shackles of slums, she had envisioned a career in education. Teaching high school students was like her dream come true—one that would be short-lived.

When the high school recruited other teachers, Neetu was let go.

Shattered by this loss, she slipped into depression. In her late twenties, she was left without a job and the long years of hard work seemed to have been for nothing.

For a year, stress and depression engulfed her.

“One day in 2015, I saw one of my neighbouring kids begging for alms on the road. I knew this girl personally but never knew she was a child beggar. That sight of her with ruffled hair, torn clothes and a bowl in her hand hit me,” the 35-year-old tells TBI

“If it weren’t for my teachers, I too would have been begging on the streets. Without education, I would have been nothing more than a beggar. At that moment, I made up my mind. Instead of working at a well-paying job, I chose to pull these slum kids out of poverty through the power of books.”

You may also like: Ending the Stigma: Meet the 18-YO Girl Helping Delhi Kids Get the Sex-Ed They Deserve

It was only in August 2018 that the Delhi government proposed to include all children till class 12 in the free education scheme instead of till class 8. Although they have to pay a fee of Rs 20 per month from class 9 to 12, the issue they faced was not about the provision of free education. Rather, it is circumstances and the distance between the school and home that stops them in their tracks. When I say distance, I mean both literally and metaphorically.

A lack of awareness about the importance of education kept the parents from enrolling their children in schools. Add to that the fact that children are “profitable” when they are on the streets begging or selling cheap but seasonal items.

About 80 per cent of slum children are forced into labour by their parents and thus, from the dawn of the day to late at night, the young ones work without eating even one proper meal in a day.

To change this, Neetu started a school under the shade of a tree right in her neighbourhood. “I started speaking to the parents in my neighbourhood, explaining to them that education is beneficial in the long run, and will help improve their situation once the kids grow up and make something of themselves. I managed to convince the parents of 12 students who started learning in my school – ‘Sab ki Pathshala’. Our first class was under the shade of a tree and soon enough, other students joined.”

As the class expanded, Neetu shifted base to a tarpaulin shade but her working as a teacher to slum kids did not go down well with the local goons. More students in classes meant fewer child labourers on the streets. This enraged certain gangs who started threatening her with rape and death. When Neetu approached the police to complain, she met with inaction.

You may also like: 22-YO Mumbai Woman Turns Skywalk into Classroom; Teaches Kids of Beggars for Free

“After all, I was just another slum dweller. The police believed that my classes are nothing more than show and they refused to help me. Who was I to teach a group of students? What credentials did I have? This passive approach from them and the gangs meant I had to deal with a lot of harassment. This, until finally, the Delhi Commission for Women stepped in to ensure protection to my classes. Gradually, the police too fell in place,” Neetu explains.

The first couple of years were rough for Neetu and her students but as she secured protection, Sab Ki Pathshala gained momentum. Over 80 students have benefitted from her courageous efforts so far of which 36 students are currently studying with her. Apart from the regular English, Math and Science classes, Neetu also teaches them dance, art and craft, and acting, among others.

Saddam, another voluntary teacher, has joined Neetu’s efforts who looks after the extra-curricular activities.

It is heartwarming to know that several teachers, like Neetu, are engaged in teaching underprivileged children to empower them. More students in classes can translate to less on the street engaged in child labour and vulnerable to drug or alcohol addiction. Every drop contributes to making an ocean and with teachers like Neetu, the efforts seem to be yielding positive results.