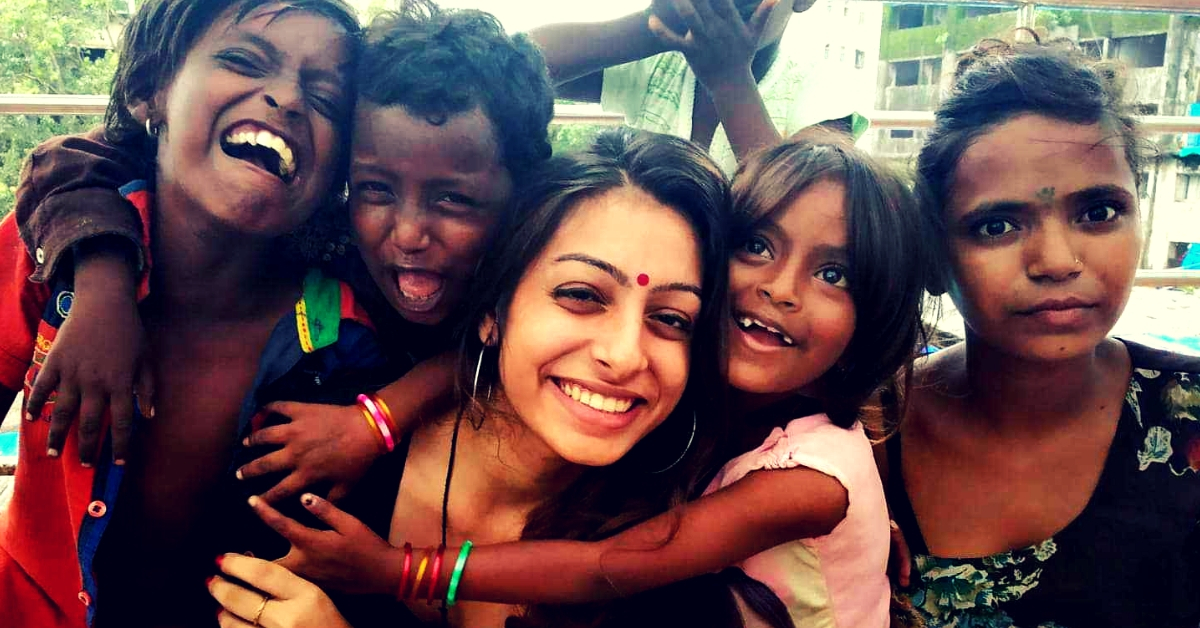 Haimanti has been on a mission to equip them with necessary skills so she can enrol them in a regular school under the Right to Education act.

Every day, 22-year-old Haimanti Sen can be found at the Kandivali station skywalk, teaching the alphabet, numbers, words, communication, and art and craft to over 15 kids, free of cost!

These kids are the children of the beggars who live in a slum in the vicinity. Since May 2018, Haimanti has been on a mission to equip them with the necessary skills that will enable her to enrol them in a regular school under the Right to Education act.

In an exclusive interview with The Better India, Haimanti, who has recently founded an NGO, Junoon, speaks about the moment that sparked her journey into social development.

“While travelling to work, I often came across kids begging or simply whiling their time away, and this would make me think about the difficult environment they were growing up in. Did they understand the importance of getting an education? Were they attending school, or even aware of the Right to Education act?”

She decided to visit their families and seek answers to these questions.

“I saw some kids near the escalator of the Kandivali station doing nothing, so I requested them to take me to their parents, and they did. I met their parents and asked for details about their kids’ education, but they started fumbling, and I could sense that there weren’t telling me the truth. So I told them, regardless of whether these kids went to school or not, I would come at 3:00 pm on alternate days and teach them art and craft. They were quick to dissuade me saying,‘We will remove them from their school. Why don’t you teach them, feed them and buy them clothes?’”

But Haimanti refused to give up. She got in touch with a school in the area to enrol some of these children. However, there were challenges here as well.

They said, “We can admit them, but neither these children nor their parents care about school. It is difficult to retain them because they remain absent for long periods. If you can guarantee that they will stay in school, then we’ll help you.”

Haimanti’s intentions were good. But could she promise that these kids would remain in school?

So, she took it upon herself to train these kids and equip them for the rigours of school. From May to October 2018, she taught them on alternate days, but from November onwards she has been teaching them for an hour every day.

While she began it as an individual project, her NGO now has an eight-member board.

The curriculum also has a structure now. Every Saturday and Sunday the team conducts dance, art, and craft classes. On Tuesday, Thursday and Friday they conduct regular classes, and on Wednesday, the children watch street plays.

“Most of these kids belong to the Pardhi community, and for the longest time, its members have been looked upon as criminals, notorious for pick-pocketing and petty theft. The issues we witnessed were grave. The parents, as well as children, drank alcohol and the environment at home was far from being conducive to growth. We couldn’t blame the kids, because they had no role models to look up to,” laments Haimanti.

Many kids are still forced to miss the dance class and instead, beg after the morning mass outside the Orlem church. But now these kids have now begun standing up to their parents.

There are times when they run and hide in restaurants,  alleyways, and under cars waiting for Haimanti to pick them up for the dance class, so their parents don’t find them.

“Often when they refuse to beg, they are hit. Sometimes their parents even blow masala in their eyes. Can you imagine the courage it takes for these kids to let go of all this so that they can study or partake in an extracurricular activity for one hour a day?”

But a lot has changed since Haimanti, and her team started teaching them. Looking at the teachers, the children make more of an effort to maintain hygiene, comb their hair and look presentable.

Their grasping power has improved, and many of them can easily write their names too.

“It’s been a difficult journey. But now, I can guarantee that of the 15 kids I have worked with, at least five of them can be enrolled in school this year itself. Slowly, I hope I can help the others ease into the formal education system too.”

You May Also Like: Exclusive: Meet The Incredible, Inspiring Odisha Chaiwala Who Just Won Padma Shri

Case studies that stand out

Haimanti’s first impression of eight-year-old Ushika was that she was angry and sad all the time. This was perhaps one of the reasons why other kids in the group often bullied her. But during classes, she saw how hardworking the young girl was.

“She wanted to study and would immediately grasp everything being taught to her, but her mother, an alcoholic, wouldn’t let her come to study. Every time she wanted to attend a class, Ushika would be asked to babysit a sibling—she would have a paper in one hand and her brother in the other. How would she manage both? It took us a time to give her the confidence to stand up to her mother. And she did.”

Naysayers and the fuel that drives Haimanti forward

Haimanti’s work has many admirers, but there are an equal number of naysayers too. Once a woman complained to the cops about her class being a nuisance to commuters. At the time, the regular commuters at the station came to her defence.

Recently she also had a salesman walk up to her saying, “Yeh bhikaari ke bacchon ko padake, aap apne standard gira rahi ho.” (By teaching the kids of these beggars you are lowering your standards)

But Haimanti doesn’t care. She continues to carry on.

Currently, the monthly requirements for the activities—which cost up to Rs 10,000 per month—are funded by the board members of the NGO themselves. In the future, they aim to expand the scope of their work and reach out to more children.

Haimanti Sen proves no matter what your age you are, you can be a changemaker if you are willing to go the extra mile.

And all we have to say to her and the team is—we are proud of you, and sincerely that hope you succeed!

If this story inspired you, get in touch with Haimanti at haimanti@junoon.org.in

To donate to the cause, make a UPI payment at haimantisen@obc