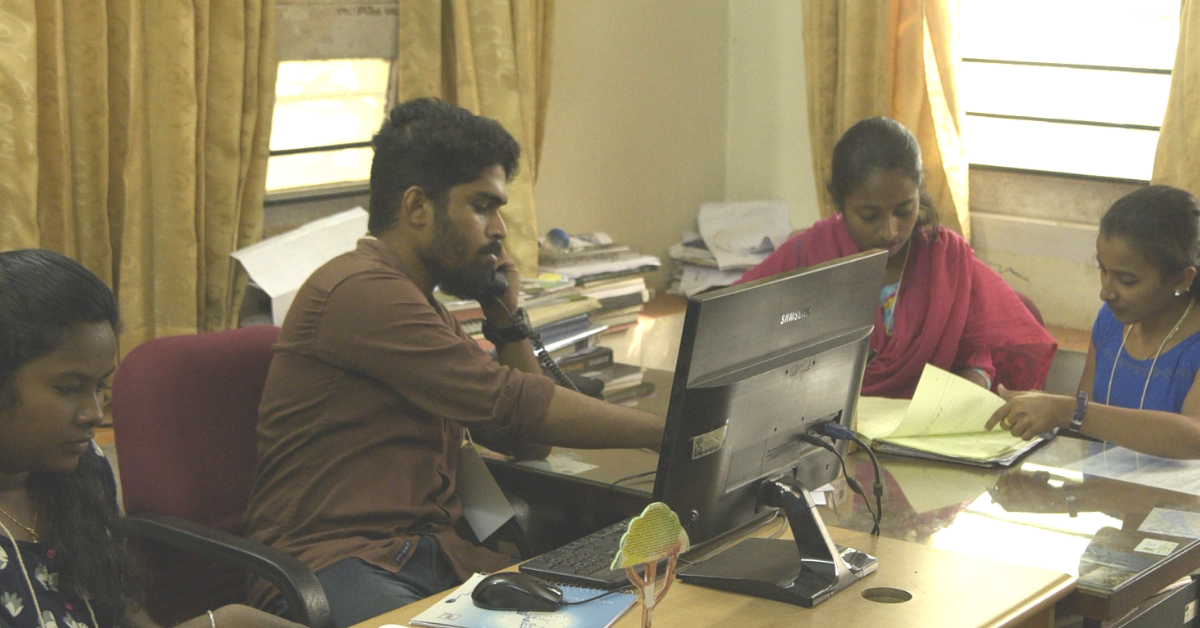 Not answering their questions will do more harm than good, because it will stunt their inherent need to ask and learn, he says. “Do as much as you can to keep fuelling their curiosity and the desire to learn,” he says.

“Amma, why are water and sky blue in colour?” asked my almost-four-year-old a few days ago. While I had a vague recollection of reading about why the sky is blue, I had no idea why the water was. Once I Googled the question, I was disconcerted and frankly confused with the sheer number of websites that cropped up with the possible answers.

To answer and more importantly encourage the curiosity of our children, the Kerala Forest Research Institute (KFRI) has started a helpline aptly called ‘First Question.’ Launched on February 28 celebrated as National Science Day, this telephone helpline is active from 9.30 am to 5.30 pm from Monday to Friday.

Children are encouraged to ask Nature and Science based questions.

The Better India spoke to Dr T V Sajeev, Principal Scientist at KFRI to understand how this helpline works and how it came into being.

Children are innately curious beings and tend to ask many questions. However, Dr Sajeev noticed that as the children got to higher classes, the number of questions they asked kept decreasing. He says, “I noticed that the older children asked lesser questions, perhaps because their questions remained unanswered when they were younger.”

Not answering their questions will do more harm than good, because it will stunt their inherent need to ask and learn, he says.

“Do as much as you can to keep fuelling their curiosity and the desire to learn,” he says.

Dr Sajeev says that by the time children reach grades 10 and above, their questions seem to dry up completely. “We must refrain from telling children that they are too young to understand a certain concept or theory, it must be the endeavour of parents and teachers to explain it in an age-appropriate manner to the children,” he adds.

Sharing some of the interesting questions that children ask, Dr Sajeev says, “We had a young girl who had planted a sapling. It had grown to a certain level, and there were a few caterpillars that were feeding on the leaves. The girl had called to check if she should be on the plants’ side or the caterpillars’.”

The answer that the helpline gave her was to monitor the caterpillar population, and if it was getting too much, then they asked her to rehabilitate a few to another plant. This young girl was a class three resident of Bihar.

Dr Sajeev says, “We must ensure that all questions, however basic or difficult they may be, are answered. Only then will the children be confident enough to ask without having to think about it.”

The kind of questions that the helpline has been getting has also seen an evolution over time. “Earlier children in higher classes would call asking about various career prospects, and now we get a lot of questions that begin with “why”,” says Dr Sajeev.

The team behind the helpline

Four KRFI research students and more than 150 domain experts from outside KFRI, answer the questions. “Up until yesterday we were managing about 30 to 35 calls, but over the last two days, that number has increased manifold. We answered almost 150 calls yesterday,” he says.

Currently, the helpline functions via landline with caller-id. The question is noted down, and within 10 minutes a call is made to the child with the answer, depending on their age level, says Dr Sajeev.

Given the volume of calls they have been getting, the helpline plans to add another line as well as a cell number to enable smoother operations.

If you wish to call in with a query, you can do so on 0487-2690222. One does not necessarily have to be a student to avail of this service. “If the child is unable to call and explain the question, we are happy to have others call on their behalf as well,” concludes Dr Sajeev.

He encourages people to use this service to ensure that one always remains curious. The next time my children ask me a question I have no answer to, I know just the number to dial.

You May Also Like: Exclusive: Meet a Child Prodigy Using His Talents to Raise Lakhs For Crucial Causes!