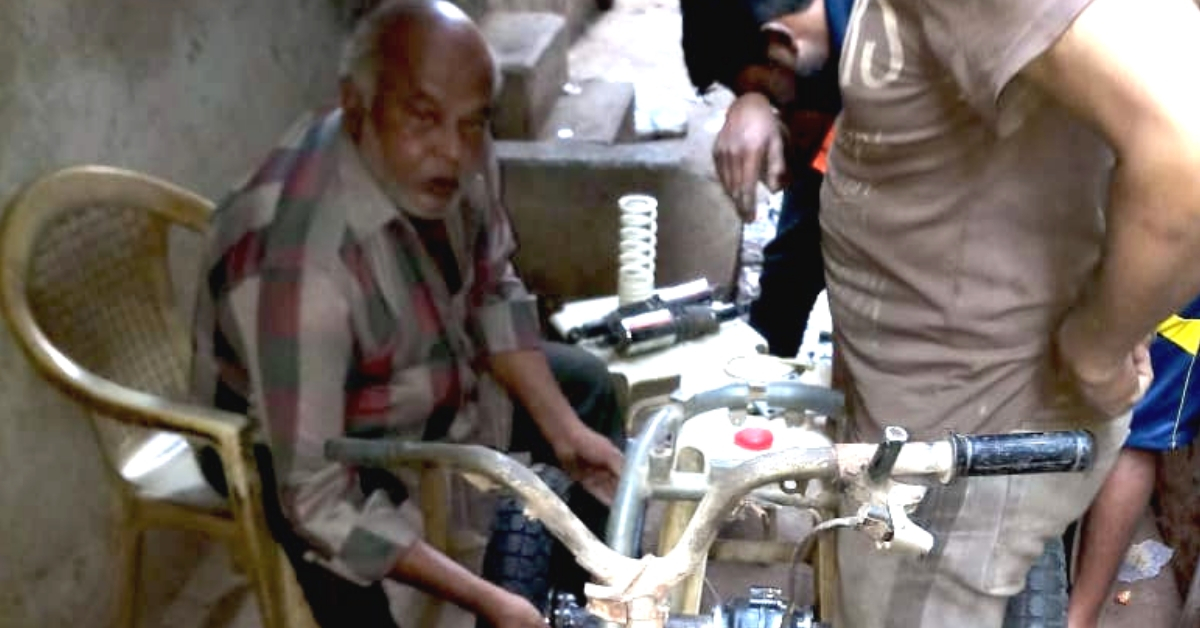 He has manufactured seven vehicles so far, and 70 per cent of their components were sourced from e-waste and scrap markets. Additionally, two are entirely powered by batteries.

Vishnu Patel, a 60-year-old from Surat is no ordinary man. He was afflicted with polio at a very young age and he has a hearing impairment.

But these impediments are not what we want to highlight.

The owner of a small manufacturing unit in the city, Patel always wanted to do something for the differently-abled community.

Perhaps it is because the trials and tribulations a differently-abled person faces on a day-to-day basis is a lived reality for him.

However, the will to act upon his wish only became pronounced after he retired from work, and about seven months ago, he decided to begin manufacturing two and three-wheeler vehicles for the differently-abled.

And that is not all.

He has manufactured seven vehicles so far, and 70 per cent of their components were sourced from e-waste and scrap markets. Additionally, two are entirely powered by batteries.

All this, from a man who is not a trained electrical or mechanical engineer!

“My father always wanted to do something for people like him. One day, he came across a YouTube video on modified vehicles that one could make using scrap and that motivated him to look for more ideas. Then, during a visit to Mathura, he happened to see a ‘desi jugaad’—a motorbike modified with a side cart! That incident paved the way for the innovator in my father to take birth,” says Nikhil, Patel’s son to The Better India, who is currently handling the responsibility of running their unit.

“But it wasn’t that easy. Since he cannot hear, he would initially only fix the components based on what he could understand, and I would help him out now and then. So, for every vehicle, 80 per cent of the work has been done by my father, while I chip in the remaining 20 per cent,” Nikhil explains.

Patel’s battery operated bikes are undoubtedly the ‘stars’ among all his creations.

“These battery-operated bikes fulfil our goal of not leaving behind any carbon footprint. By charging them for 2-3 hours, one can easily commute for about 35-45 km,” says Nikhil.

It takes about a month to manufacture a vehicle, and Nikhil mentions that every final product goes through multiple runs of trial and error.

Except for components like battery, motor and controller—which are new—everything else is purchased by the duo from discarded motor vehicle units and then upcycled. There is no fixed model for any of these vehicles—it all just works out as Patel fixes the components on the go.

“His ultimate objective is to make a nominally-priced vehicle that differently-abled people can use to commute on their own, and also travel along with their family members. We are working on this model currently, and it would help if the government offered some monetary support. We end up spending approximately 25,000 from our pockets for every vehicle that we make, and this amount includes the salary of our helpers,” shares Nikhil.

“At that time, we had tried to shed light on our financial limitations by mentioning about government support. As per our estimates, an amount of Rs 20 lakh would suffice to streamline my father’s current mission, physically as well as monetarily. Come what may, we intend to fulfil my father’s dream of serving the differently-abled communities by taking these e-bikes to the market. We have reached out to the concerned authorities, and hopefully things will work out soon,” Nikhil adds.

You may also like: This 16 YO Girl’s Brilliant Invention For Her Disabled Brother Will Make Your Day!

If you have been moved by Vishnu Patel’s selfless efforts and wish to help him in his endeavour, you can reach out to Nikhil at 9904203000.