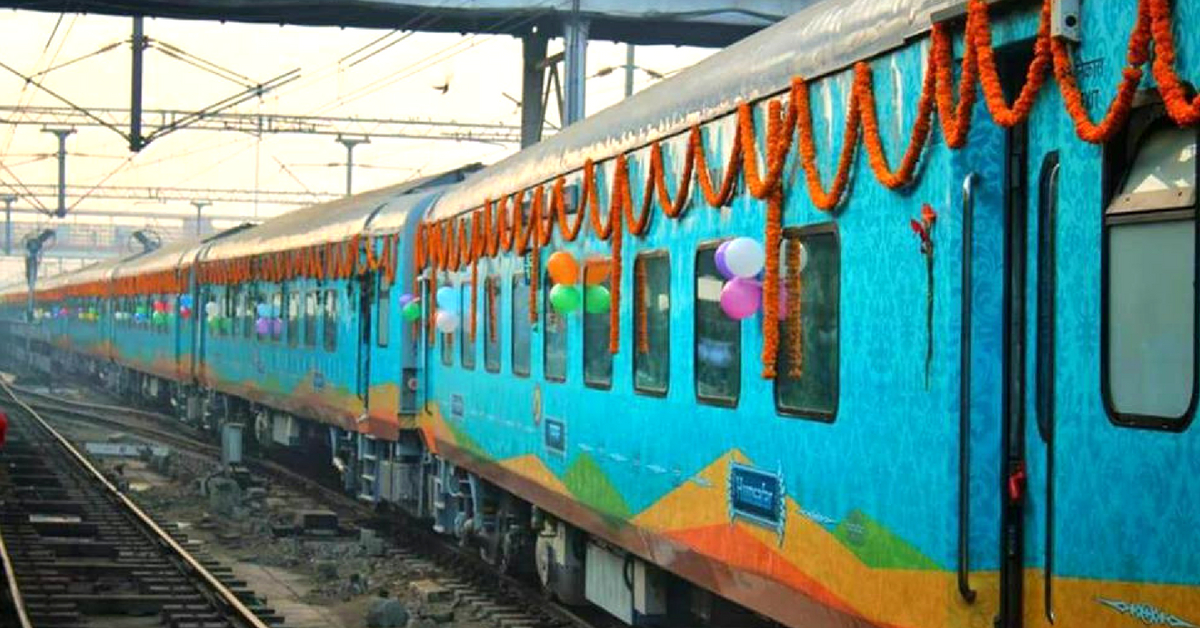 The Humsafar Express, a new train by the Railways, is loaded with great features.Image Credit:- Indian Trains

The Indian Railways decided to take things up a notch, and launched a number of new trains loaded with features.

The Indian Railways has always strived to make train journeys for you as pleasant as possible. If you rewind a few years, trains were notorious for poor hygiene, running late and generally being inefficient. Well, drastic steps taken by the Railways have more or less reversed the above.

Amongst their many initiatives, the Railways has also introduced new trains. Loaded with facilities, these trains are better than their older counterparts thanks to superior technology and advanced safety features.

Here are trains that the Railways has introduced. All these trains cover multiple routes, to some of the most scenic destinations in India. So, hop on and embark on an exciting adventure!

From anti-graffiti vinyl coating on the coach interior to a reading light for each seat, CCTV cameras, GPS, mobile and laptop charging points and an LED display screen, this fully AC III Tier train, launched in 2016 is quite advanced. It even has braille display for the visually impaired, a smoke-detection system, baby nappy changing pads, tea and coffee vending machines and a refrigerator to store food brought from home, and an oven to heat it. Read more about it here.

To begin with, these trains have see-through roofs and large side windows that enable passengers to experience a panoramic view of the surroundings. Additional features include hanging LCD screens, a mini-pantry, mini-fridge, automatic sliding compartment doors, bio-vacuum toilets as well as 360 degrees rotatable double-wide reclining seats. Learn more here.

The Utkrisht Double Decker Air-Conditioned Yatri Express, is quite the fancy new train, with a host of new features, like a GPS-based passenger information system, an infotainment system with Wi-Fi, food vending machines as well as an exclusive passenger dining area. With anti-graffiti vinyl wrapping, a mini pantry, diffused LED lighting and LCD screens, this chair-car train is quite the modern marvel.

The Antyodaya Express is a fully-unreserved, long-distance superfast train service between Tambaram and Tirunelveli, and has stainless-steel coaches of the Linke Hofmann Busch (LHB) varieties. With cushioned seats, a luggage rack, two chargers per bay, two water dispensers per coach, fire extinguishers and additional dustbins, this train is a boon for unreserved travellers.

Reportedly India’s fastest train, the Gatimaan Express now runs up to Gwalior, Jhansi. This train has two executive chair car coaches and 8 AC Chair car coaches. There are two sets of menus for vegetarian and non-vegetarian passengers, apart from an assortment of snacks like cakes and wafers. The train has advanced safety features, like an automatic fire alarm, an emergency braking system, passenger information system, sliding doors, free Wi-Fi, and hotspots for multimedia devices, as well as bio-toilets and 8-inch LCD’s behind every seat. Learn more here.

You may also like:- Clean Toilets To Charging Points: Now ‘Train Captains’ To Solve Your On-Board Troubles!

This train is truly special, as the service was re-started again after almost five decades. This train runs between India and Bangladesh and is the only other train apart from the Kolkata-Dhaka Maitree Express, that runs between the two countries. On its inaugural journey, the train carried 53 passengers.