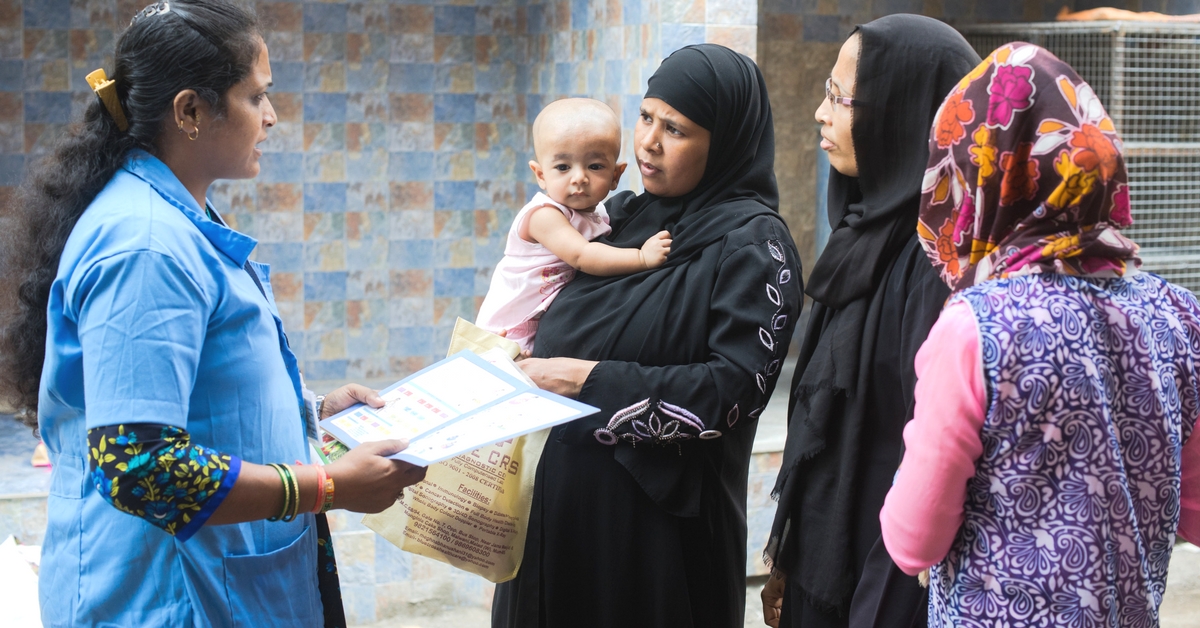 Every married woman of reproductive age eligible for family planning is visited at home.

Among the slums of M/East Ward in Mumbai, Salma, a field worker of the Society for Nutrition, Education and Health Action (SNEHA) came across a woman named Kusum, who was reluctant to use any contraception.

“I don’t want any more children. But I will not use Copper T or condoms as the Copper T will rise up into my body and using a condom will make my man infertile. I will use the traditional methods that everyone in my family uses.” an adamant Kusum expressed.

Salma tried to allay Kusum’s fears by explaining to her and showing her charts about Copper-t and condoms, but this did not change Kusum’s mind.

The next day Salma invited Mehrun, a role model to Kusum. Mehrun lived close by and knew Kusum. This developed a comfort level between the two very quickly.

Mehrun explained to Kusum that she too refused to use contraception but ended up having her second child too early after her first. Then Mehrun came across SNEHA field workers talking about the safety and the advantages of using a condom.

Also Read: Where Do Slum Kids Go When They Are Depressed? Here’s the Wonderful Answer

Mehrun then explained to Kusum that she learnt that as long as she continued to use a condom, she was able to prevent a pregnancy. “As soon as I decided I wanted to have another child, I stopped using the condom which helped me to become pregnant”, she added, correcting Kusum’s fear of becoming infertile upon using a condom.

The detailed conversation between the two helped to remove Kusum’s fear of condoms and converted her into adopting the use of condoms for contraception. Mehrun and Salma went on to let Kusum know that if in case she has any trouble convincing her husband, they would be willing to speak with him too.

Hundreds of meetings and conversions like this are part of a quiet transformation happening in M/East Ward slums, where SNEHA is hoping to give back women agency over their health and pregnancies.

Currently in its third and final year of implementation, the program is tackling family planning practices or the lack of them in the community, including Mankhurd and Govandi, two eastern suburbs in Mumbai.

‘Repeated pregnancies within short time spans, congenital disabilities due to advanced maternal age, early and premature maternity are all real issues affecting the health of the community, and this has inter-generational effects,’ Sushma adds.

SNEHA decided to tackle the problem by looking into the causes of low family planning adoption. Through focus group discussions with its target groups, individual interviews and ethnographic methods, it found that religious and cultural beliefs prevent community members from adopting contraception on a regular basis.

“A major issue is also the lack of agency and reproductive autonomy among women who don’t have the freedom to choose when and if they want to conceive,” explains Sonali Patil, Associate Program Director.

Increasing the access for contraception among married women is one of the programme’s major focus areas, and it was decided that there would be a major push for planned parenthood through counselling, during pre-conception, pregnancy as well as after delivery.

“Home-based counselling, where we meet with a woman in the comfort of her home and offer her authentic information about contraception and its various modes in a non-judgemental way is one of our biggest ways of getting across messaging about family planning,” says Sonali.

“Home-based counselling gives our field staff the opportunity to understand the realities faced by women they counsel. For instance, one of our field workers came across a mother of four children who wanted to adopt a permanent contraceptive method, but her husband was against adopting contraception,” adds Sonali.

While each case is complex and different, there are frequent staff meetings where senior team members troubleshoot, offer guidance and in some cases accompany the field staff on a home visit. Once the counseling has been done and the couple decides which method they would like to employ, SNEHA connects the beneficiary to government health services for the same.

Every married woman of reproductive age eligible for family planning is visited at home. “In some cases, it is an awareness issue. The woman is not aware that she can avail of family planning services in public hospitals or that there is a wide range of temporary and permanent options to choose from,” says Anjum, a Field Worker.

“In some case, it is a problematic power dynamic between the couple, where the husband is reluctant to opt for family planning, owing to misinformation or socio-cultural beliefs. In some cases, there is awareness but fear about one or more of the methods,” she adds.

SNEHA has also identified a unique way to convert reluctant cases, by using community role models.  A role model is someone who had previously harboured a similar reluctance to the practice but had a transformation in their knowledge, attitude and practice of family planning.

Reluctance is usually governed by fear, misinformation or lack of reproductive autonomy.

Also Read: The First 1000 Days: We Can Transform Our Children With a Few Right Steps

SNEHA also works with couples directly, to increase the age of first pregnancy. Annually, a ‘Couple Day’ is celebrated, sensitising couples on the importance of shared planning and decisions. It is also an effort to engage men in actively participating towards his family’s health.

Activities are held, with newly married couples, to initiate a dialogue on family planning methods, its advantages and care during and between pregnancies.

In case women want to use pills or condoms, the field worker procures a supply through the Community Health Volunteer (CHV) of MCGM, refers the woman to the CHV or MCGM Health posts or puts them in contact with an ICDS worker.

Perhaps, the most significant development has been in cultivating ties with local religious and community leaders and to leverage their charisma and mass appeal to get them to profess the benefits of planned parenthood.

“As socio-cultural and religious beliefs play a huge part in preventing community members from adopting family planning methods, we found that working with religious leaders can be yet another effective strategy of influencing decision making and thought process,” says Sushma.