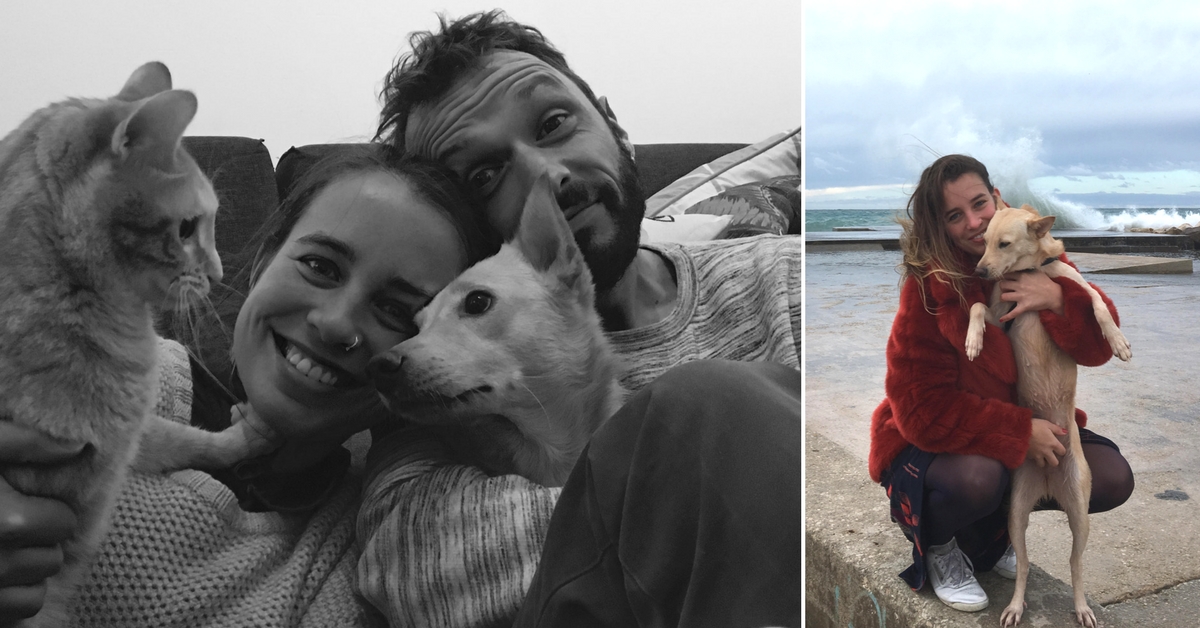 ‘I’ll give you your freedom. But if you want to stay with me, I’ll leave no stone unturned to take you home with me to France. You really are my dog.’

28-year-old French artist, Lucie Lefevre, traveled from the beautiful coastal city of Marseille in the South of France, to India five years ago to work with her close friend Karan Talwar, who runs the Harkat art studio in Versova.

Over the years, she continued to visit India to work on projects. But never did Lucie think India would gift her a cherished lifelong companionship.

When Lucie visited India in January 2017, to work on a three-month long art residency. It was at the time she first met Rani.

The pavement outside Harkat studio was Rani’s home. It was love, at first sight, says Lucie speaking to The Better India.

“Words cannot explain our first meeting. Right from the first look, it was magic. It wasn’t just I, was the one who adopted Rani, she adopted me too,” says Lucie.

Lucie was always an animal lover. Looking at the sheer number of strays on Mumbai roads, she always carried some Parle G biscuit packets in her bag to feed them. This was how Lucie started interacting with Rani too.

“Even though Rani was already familiar with people working at Harkat studio, she became close to me. I would pet and feed her every day. I remember how she would curl under my feet while I worked,” Lucie recalls.

Soon Lucie started taking Rani back home to where she lived in Mumbai, at Madh Island.

They lived together for almost two weeks at Lucie’s Madh home. But sadness about the more long-term separation they would have once Lucie went back to France was already sinking in.

Lucie knew she didn’t want to leave Rani behind. So she started researching rules and processes for international adoption. It was at the time she connected with Ganesh, the founder of Mumbai-based NGO Animals Matter to Me (AMTM) and explained the situation to him.

But Rani’s consent mattered to Lucie too. She calls it one of her most special memories with Rani.

“We went to the beach for a walk, where I took Rani on a leash. I looked at her in the eye, unleashed her and said, ‘I’ll give you your freedom. But if you want to stay with me, I’ll leave no stone unturned to take you home with me to France. You really are my dog.’”

When Lucie unleashed, she ran happily. But every time, Lucie called out to her. Rani came right back to her.

“So I told myself, here you are, you have a dog now, and you have to do everything for her,” Lucie says.

And thus began the long process of multiple approvals and paperwork to take Rani to France.

“Karan, my friend from Harkat and AMTM handheld me through Rani’s tests and paperwork,” says Lucie.

Rani’s blood test revealed that she didn’t have enough rabies antibodies. So she was entrusted to the care of Dr. Ankita from AMTM, who helped raise the count with treatment. But it was a long process.

Rani who was supposed to arrive in France in August took as long as December. Lucie had to return to France by March and was deeply upset by the separation.

“It was so hard to see her from far away, and I missed my dog so much. But the AMTM staff was so supportive. They sent me pictures of Rani’s process every week.”

Fast forward to 2018; Rani has adapted to the beautiful coastal city of Marseille quickly.

“At the beginning, we bought her a little coat because we were worried about the winter in France. But it appeared she didn’t really need it. She had her own sofa in the flat. We are going to the beach for a walk almost every day. She is always with me during the day, coming to my art studio. She loves the sea even if it’s a bit cold for swimming for now. She will enjoy it more this summer!” says Lucie delightfully.

Rani has found wonderful pet parents in Lucie and her fiancé, Pierre, who is also an animal lover.

“Pierre was very supportive and enthusiastic about my decision. He was equally stressed during those difficult months of Rani’s procedures. Ever since her arrival, Rani and Pierre have bonded strongly,” says Lucie.

It isn’t just her fiancé but also her cat, Pablo who has accepted Rani as their new family member.

“I was a little worried because we usually think that cats and dogs don’t really bond together but to my own surprise, Pablo adopted Rani very fast, and they now share the same sofa. You’ll often spot them playing together!” Lucie says.

We got in touch with Ganesh Nayak from AMTM who lauded Lucie’s decision to take Rani to France without caring about her breed.

“Known breeds are preferred over a stray which is a harsh reality. But every dog, no matter what the breed, is always faithful to their master. Lucy spent a good amount of time to bond with Rani. And for them, it was the bond and love they shared that spoke, not Rani’s breed,” says Ganesh.

In her final message to people, Lucie says, “They are so many animals out there who deprived of love. Just give them one chance, they’ll transform your life forever. I can proudly say, we’re all pleased together, and it is Rani who makes our life beautiful.”

Did the story of Rani and Lucie inspire you?
Write to Lucie at lucielefevre@live.com
or https://lucielefevreart.com/