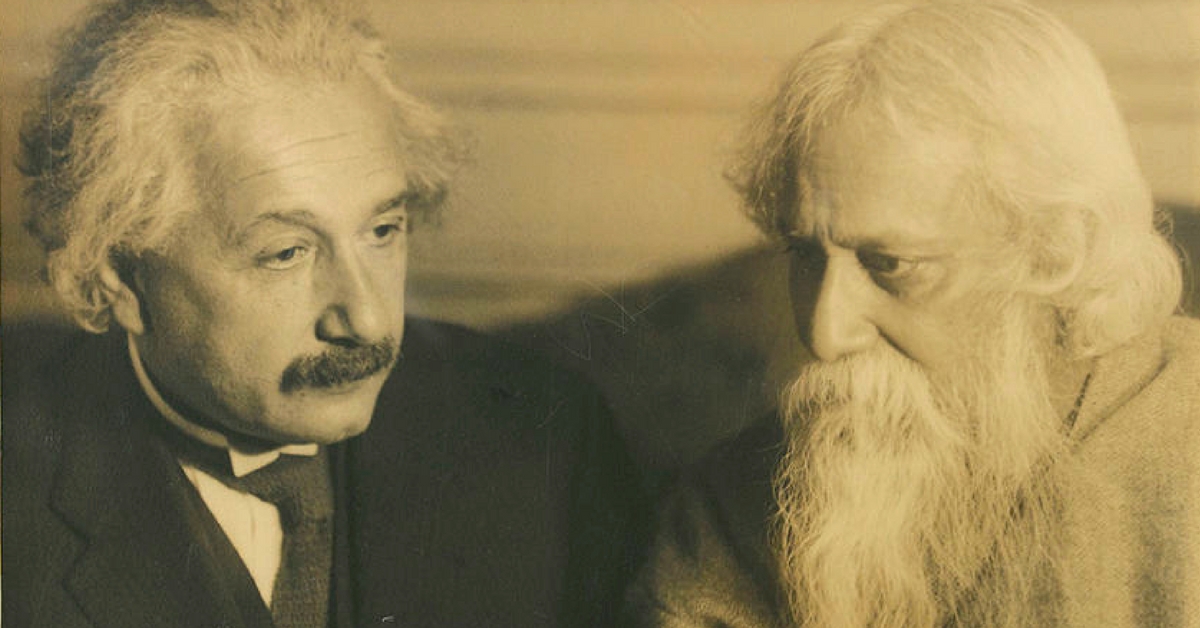 Arguably world’s greatest scientist, Einstein’s theories catapulted him to global fame in an era that coincided with the ‘golden age’ of Indian science.

“We owe a lot to the Indians, who taught us how to count, without which no worthwhile scientific discovery could have been made.” ― Albert Einstein

For years, his unforgettable image — wiry moustache, penetrating eyes and frizzy, gravity-defying hair — has beamed out at us from posters and T-shirts, transforming his name into a handy epithet for eccentric polymath. Little wonder Albert Einstein is still considered the world’s original mad genius, science’s first celebrity and, arguably, still its greatest.

Einstein’s journey as a genius started when he discovered that mass and energy are different forms of the same thing and expressed this in the neat little formula E=mc2. Later came the discovery that he considered the “the greatest satisfaction of my life” — the theory of general relativity that proved energy and mass distort space-time. These were the iconic ideas that catapulted him to lasting public fame.

Few Indians know that this era in history also coincided with the ‘golden age’ of Indian science. While Einstein was proving that gravity was governed by underlying laws, Sir CV Raman had won the Nobel Prize for his work on the scattering of light, and Meghnad Saha was garnering international acclaim for his work on stellar radiation.

However, while these two legends never directly dealt with Einstein, there was one Indian scientist who managed to reach out to Einstein with stupendous results. A classmate of Saha at the University of Calcutta, Satyendranath Bose worked at the physics department of the University of Dacca (now Dhaka).

In 1926, the talented physicist sent a paper to Einstein describing his idea for a statistical model to understand elementary particles that acted as natural transporters of force (such as the photon, first conceived by Einstein as the carrier of light). The paper was called Planck’s Law and the Hypothesis of Light Quanta.

Impressed by the significance of the idea, Einstein had it published in the top German physics journal of the time and invited Bose to collaborate with him in Berlin. This was what eventually led to the important discovery of what became known as the Bose-Einstein condensate phenomenon. This was also why nature’s tiny transporter particles were later named ‘bosons’ (including the famous Higgs boson discovered in 2012).

On Einstein’s written recommendation, the young Indian was appointed the Head of the University’s Department of Physics. He would go on to contribute significantly to fields such as statistical mechanics, electromagnetics, X-ray crystallography, quantum mechanics, thermo-luminescence, and unified field theory.

Interestingly, in his memoir, Subrahmanyam Chandrasekhar (who won the Nobel Prize for his work on the evolution of stars) wrote how the first ever recorded translation of Einstein’s papers on relativity was done by Saha and Bose in India in 1919, even before the theory was experimentally confirmed!

Nonetheless, Einstein’s interaction with India wasn’t limited to just scientists. He would frequently exchange postcards with Gandhi and Nehru on issues such as colonialism, non-violence, satyagraha, and industrialisation in India.

However, his longest and best-known engagement with any Indian was with Rabindranath Tagore. Fellow Nobel Laureates, the two luminaries had a genuine curiosity and deep respect for each other’s perspectives. In fact, Einstein even addressed Tagore as Rabbi (the Hebrew word for teacher).

This was why their meeting at Einstein’s Berlin residence on July 14, 1930, led to a brilliant dialogue that has been described as one of the “most stimulating and intellectually riveting discussions in history”. 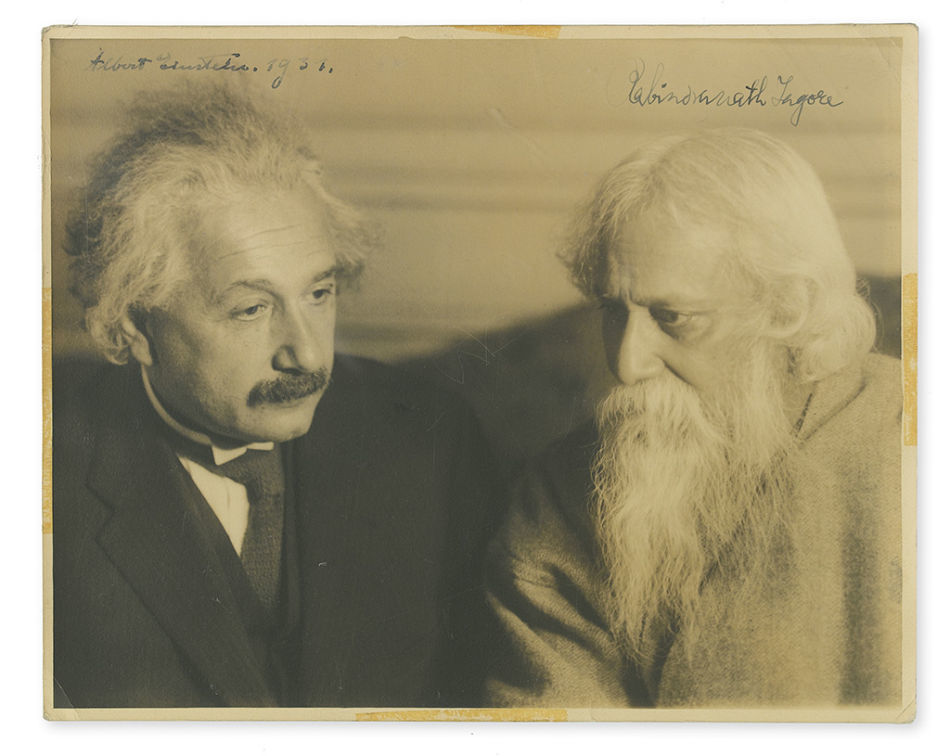 TAGORE: You have been busy, hunting down with mathematics, the two ancient entities, time and space, while I have been lecturing in this country on the eternal world of man, the universe of reality.

EINSTEIN: Do you believe in the divine isolated from the world?

TAGORE: Not isolated. The infinite personality of man comprehends the universe. There cannot be anything that cannot be subsumed by the human personality, and this proves that the truth of the universe is human truth.

EINSTEIN: There are two different conceptions about the nature of the universe — the world as a unity dependent on humanity, and the world as reality independent of the human factor.

TAGORE: When our universe is in harmony with man, the eternal, we know it as truth, we feel it as beauty.

EINSTEIN: This is a purely human conception of the universe.

TAGORE: The world is a human world — the scientific view of it is also that of the scientific man. Therefore, the world apart from us does not exist; it is a relative world, depending for its reality upon our consciousness. There is some standard of reason and enjoyment which gives it truth, the standard of the eternal man whose experiences are made possible through our experiences.

EINSTEIN: This is a realization of the human entity.

TAGORE: Yes, one eternal entity. We have to realize it through our emotions and activities. We realize the supreme man, who has no individual limitations, through our limitations. Science is concerned with that which is not confined to individuals; it is the impersonal human world of truths. Religion realizes these truths and links them up with our deeper needs. Our individual consciousness of truth gains universal significance. Religion applies values to truth, and we know truth as good through own harmony with it.

EINSTEIN: I cannot prove, but I believe in the Pythagorean
argument, that the truth is independent of human beings. It is
the problem of the logic of continuity.

TAGORE : Truth, which is one with the universal being, must be essentially human; otherwise, whatever we individuals realize as true, never can be called truth. At least, the truth which is described as scientific and which only can be reached through the process of logic—in other words, by an organ of thought which is human.

Unsurprisingly, this fascinating conversation quickly became a media sensation with many publications across the world carrying the recorded version.

The New York Times wrote an article with the headline ‘Einstein and Tagore Plumb the Truth’ and a memorable photo (of their New York meeting) titled “A Mathematician and a Mystic meet in Manhattan.”

Einstein and Tagore would go on to meet two more times and stay in touch through letters. While this was the last of the German’s limited physical interaction with India, his ideas have continued to inspire countless Indians ever since. In fact, several scientists from India are still deeply engaged with Einstein’s ideas about time, space and gravity.

As we end the story of Einstein and his India connect, here’s a little-known anecdote from the annals of Travancore University (now University of Kerala).

A decade before India became independent, in 1937, the tiny princely state of Travancore had aimed high when it invited Einstein to be the first vice-chancellor of its fledgling university for a monthly pay of ₹ 6,000 (quite a huge sum back then). This was the idea of the then-Diwan of Travancore, C P Ramaswami Aiyar, a shrewd administrator and avid scholar who kept abreast of contemporary developments in modern science.

The German genius, however, politely declined the offer, saying he wanted to join Princeton University in the US. While some local councils have records citing this legend, there is no direct physical record of Ramaswami’s invitation.

You May Like: Exploring Tagore’s Santiniketan, an Abode of Learning Unlike Any in the World