Asha Bhosle at 86: Little Known Facts About the Life of a Legend As the vivacious and versatile singer turns a year 'younger' today, we celebrate her beautiful journey with 8 little-known stories from her life.

She is the legend who has sung over 11,000 songs in more than 20 Indian languages, been immortalized on a UK No 1 record, and found a place in the Guinness Book of World Records as the world’s most prolific recording artist.

Vivacious and versatile, Asha Bhosle is one of India’s most admired and prolific artistes. Bhonsle’s musical journey over her seven-decade strong career has been extraordinary. The third daughter of renown singer-actor Pandit Dinanath Mangeshkar, she was just 11 when she performed her first song, Chala Chala Nav Bala, for a movie soundtrack in 1943. Blessed with an unparalleled voice, the talented singer never looked back, going on to win a multitude of national and international awards.

Whether it was a classical ghazal like ‘Kisi Nazar Ko Tera Intezar Aaj Bhi Hai‘ or garage rock like ‘Dum Maaro Dum‘, Asha tai (as she is affectionately called) poured her soul into every song she sang. It has been 74 years since, but the magic of her music remains undiminished with the diva constantly reinventing herself through unusual collaborations and experiments. Equally endearing are her signature candour, ready sense of repartee and captivating smile.

With an ever-increasing fan base that transcends the barriers of age, background and borders, Asha Bhosle is an inspiration for musicians not only in India but across the world.

As the evergreen singer turns 84 today, we celebrate her beautiful journey with 8 little-known stories from her life.

1. Famous for her popular cabaret playbacks, she won her first National Award for ghazals. By the 80s, Asha Bhosle had the crowds grooving to her wildly peppy cabaret numbers. However, it was her 1981 collaboration with music director Khayyam for Umrao Jaan that led to some of the most memorable songs of her career. She got her first National Award for best female playback singer, thanks to the soul-searing ghazals she sang for Rekha in the period drama.

2. When one of her favourite songs of all times was composed by the Hooghly riverside. 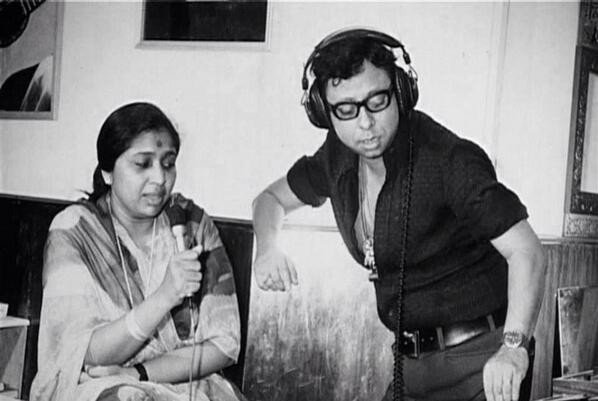 Once, Aha and her husband (the late music director R.D. Burman) were enjoying a quiet evening by the Hooghly river side. The stars were emerging in the darkening sky, a gentle breeze was blowing, and the boatmen were singing songs as they returned home. The quiet was suddenly broken by an excited exclamation from Burman, “Let’s go, Asha, we’ve found our song!”

That evening by the Hooghly riverside was the inspiration for a tune that would go on to become the hauntingly beautiful ‘Do lafzon kee hai dil ki kahani, ya hai mohabbat, ya hai jawani’ song from the Amitabh Bachchan-Zeenat Aman movie, The Great Gambler.

3. When a James Bond film led to an unforgettable album. The year was 1987. Asha had been requesting RD Burman and noted lyricist Gulzar to work on songs for an album she wanted to do with them. However, both of them kept delaying it and finally she gave up.

Then, once, while watching a James Bond film (in which there was a scene where Bond emerges onscreen as a tune plays in the background), Burman suddenly switched off the TV and began working on a few tunes. He then spoke to Gulzar for the album (called Dil Padosi Hai) that would finally released on Asha’s 54th birthday.

4. She found an outlet for her creativity through her unique collaborations.

Asha Bhosle has collaborated with Boy George, Michael Stipe, the Kronos Quartet, Nelly Furtado and Code Red. This list of amazing collaborations started in the 1980s when Asha came together with Stephen Luscombe (of Blancmange) and Vince Clark to form a group called the West India Company. The record released by this group was an unexpected success and was soon followed by other amazing collaborations such as The Way You Dream (a duet with Michael Stipe).

In 1997, British band Cornershop paid a tribute to Asha with their hit number,’ Brimful of Asha‘. Interestingly, the Black-Eyed Peas’ hit song from 2005, “Don’t Phunk With My Heart,” was based on samples from two different songs by Asha!

5. When she tried her hand at composing and acting.

Asha Bhosle has never hesitated when it comes to trying something new. Other than experimenting with different genres of music, she has also tried her hand at different roles altogether. In 2002, she composed the music for an original album titled Aap Ki Asha. A decade later, the 79-year-old singer stepped in front of the camera with the Marathi film Mai. A family drama that revolved around children abandoning their aged parents, the film also starred actors Ram Kapoor and Padmini Kolhapure.

6. She was the first Indian singer to be nominated for a Grammy. In 1997, Asha Bhosle became the first Indian singer to be nominated for a Grammy. The nomination was for the album Legacy that had 12 beautiful classical numbers in Asha’s mellifluous voice with Ustad Ali Akbar Khan masterful handling of his sarod.

In 2005, she was nominated for the second time for the Grammy awards. This time, the album was a collaboration with Kronos Quartet titled ‘You’ve Stolen My Heart – Songs From R D Burman’s Bollywood‘. The next year, when David Harrington of the Grammy-winning band Kronos Quartet presented Asha Bhosle at New York’s fabled Carnegie Hall, this is what he said:

“It has been like introducing an Indian version of Elvis to a whole new generation.”

7. She won a Filmfare award for a playback song that was never picturised! In 1974, Asha Bhosle won the Filmfare Best Singer award for a playback song that was supposed to be used in a movie but ultimately did not figure in the movie at all. The song was ‘Chain se hum ko kabhi aap ne jeene na diyaa‘ and the movie was ‘Pran Jaye Par Vachan Na Jaye‘. Incidentally, this was also the last song Asha sang for O P Nayyar, the music composer who created some of her best songs.

8. A skilled cook herself, she owns several restaurants across the world. Besides being a music maestro, Asha Bhosle is a skilled cook. Her family, friends and colleagues in the industry swear by her delicious meals, especially her prawn patties and paya curry.

In fact, prompted by her love of food, Asha has started her restaurants in Dubai, Bahrain, Abu Dhabi,Qatar, Kuwait, and Birmingham and Manchester in UK.  Called Asha’s, the restaurants serve signature dishes inspired by Asha’s childhood and RD Burman’s favourite meals, with the singer’s all-time hits playing in the background.