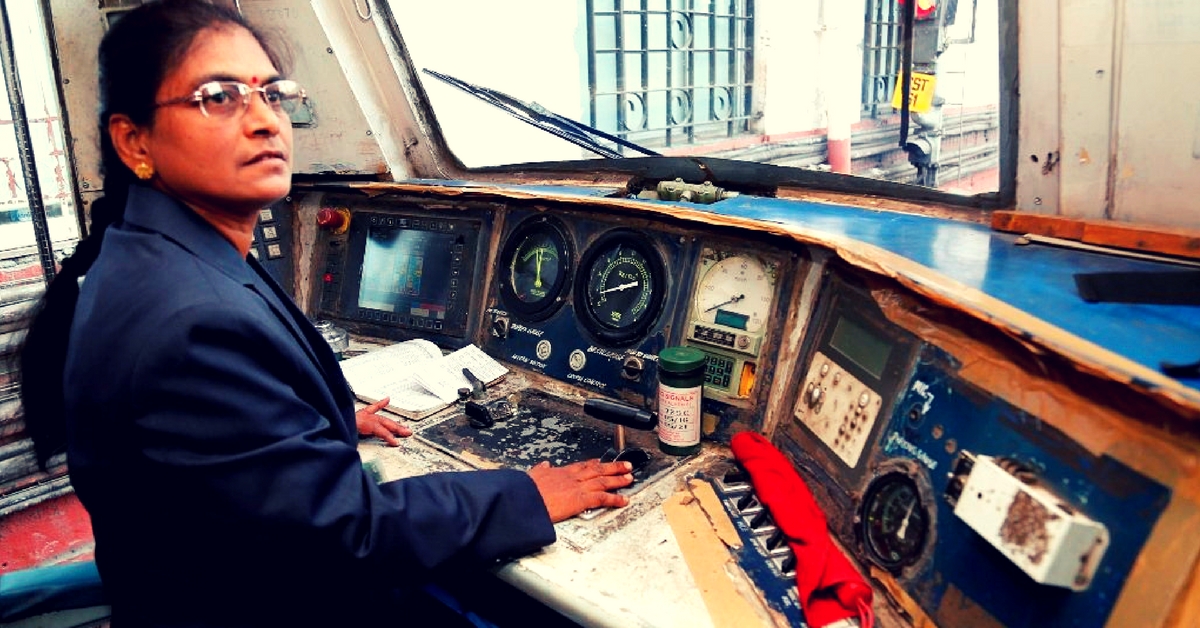 While women boarded trains in the 1980’s, Surekha Yadav was driving them.

She proved the naysayers wrong by having a successful 29-year long career in the field!

Born to farmers, Sonabai and Late Ramchandra Bhosale, in the Satara district of Maharashtra, Surekha is the oldest of five children. She studied in Saint Paul Convent High School, and was an all-rounder in academics and sports. She also has a diploma in Electrical Engineering.

Surekha had plans to become a teacher, but those changed as soon as she landed a job with the Indian railways!

“It’s the most ordinary story you’ll ever hear,” jokes Surekha. “I had only completed my diploma in electrical engineering. Just like most other students, I was looking for a full-time employment opportunity. Word got around that the Indian Railways had a vacant position for an assistant driver and the requirement stated ‘diploma in any faculty’ were welcome to apply.”

Being a technical student, Surekha casually filled the form and decided to attempt the written exam in 1987.

But much to her dismay, an acceptance letter arrived at her doorstep one day. “I did not think I would get in. It was actually my first job application. I joined the Central Railway as a trainee assistant driver in 1986 and since then there was no looking back, ever since,” she says.

For reasons that have nothing to do with the day’s popularity, Valentine’s day in 1989 marked Surekha’s first milestone as a regular assistant driver.

“I was the only girl at the written as well as viva exams. I was unaware that no girl or woman had worked for the Indian railways in the capacity of a train driver. Somebody had to take the first step and level the playing field. And I knew this was my chance to do something for my country, my family and myself.”

In 2011, the number of women train drivers in India rose up to 50. They were operating suburban trains, goods trains, and even serving as shunters or assistant drivers.

An unsung love for trains

From being an assistant driver and a goods train driver to a motorman for passenger trains riding through challenging terrain, Surekha has come a long way!

The first local goods train she piloted was numbered L-50, running between Wadi Bunder and Kalyan. As a newbie, she was only assigned the task of checking the running condition of train’s engine, the signals, and all related duties. She became a full-fledged goods train driver in 1998.

One of her most challenging roles was that of a ghat driver on the Western Ghat railway line in 2010. She went through a special training to run the twin-engined passenger trains.

When I was chosen as a ghat-loco driver, a few officers voiced their doubts saying, “No woman has ever taken up this post, we cannot give such a huge responsibility to a lady.” But Surekha fought back, “I have undergone the same training that most other men have. I was appointed and selected because I possess the potential. I know I can do it.”

As an assistant driver, young Surekha drove shunters. She became a motorwoman as early as 2000. The word spread like wildfire and there were media houses lining up to interview her and ask for autographs!

When the ‘Ladies Special’ local trains were introduced by the then Railway Minister, Mamata Banerjee in April 2000, Surekha was the first motorwoman driving it.

May 2011 was when she was promoted as an express mail driver, and also when she began teaching at the Driver’s Training Centre (DTC) in Kalyan, where she continues to be a Senior Instructor.

The most defining moment of her career was Women’s Day on March 8, 2011, when she was named Asia’s first woman train driver to run the Deccan Queen from Pune to CST, one of the most difficult rail routes.

Apart from the initial lack of trust, she was supported by her family, friends and colleagues. “I did not experience discrimination as a woman. If you try to use the woman card you lose credibility. I did not want to stand out, I wanted to be an efficient employee hired to do my job. The physical difference is all there is between men and women. When the output is the same, how does gender matter?” she questions.

She drives while tackling risks like chain-pulling, rasta rokos (a form of protest in India to stop trains or block roads), and people or animals crossing the track suddenly, and has no record of accidents till date. Her ambition is to drive a long distance passenger train some day.

She is married to Maharashtra Govt Police Inspector, Shankar Yadav in 1990, and they have two sons, Ajinkya and Ajitesh. Both the boys are studying to become engineers.

You may also like: This Independence Day, Let’s Pay a Tribute to the 10 Forgotten Women Warriors of India!

“All you need is to take that first step. When you are passionate about something, don’t hesitate. Be bold, the world doesn’t let shy women shine. With your capability, knowledge, efforts, you can achieve anything. First, build your own internal support, what you seek from the world outside is secondary. If you don’t trust yourself enough, it doesn’t matter whose trust you rely on. Don’t ever quit without trying. Make sure your work brings happiness to you, your family and your country.

Whenever women in history have decided to step into a male bastion, they have faced the heat. “Doesn’t matter if you are the first teacher, clerk, nurse, pilot or soldier. I was glad this opportunity to impact change came to me unknowingly. If I can do it, all woman can.”