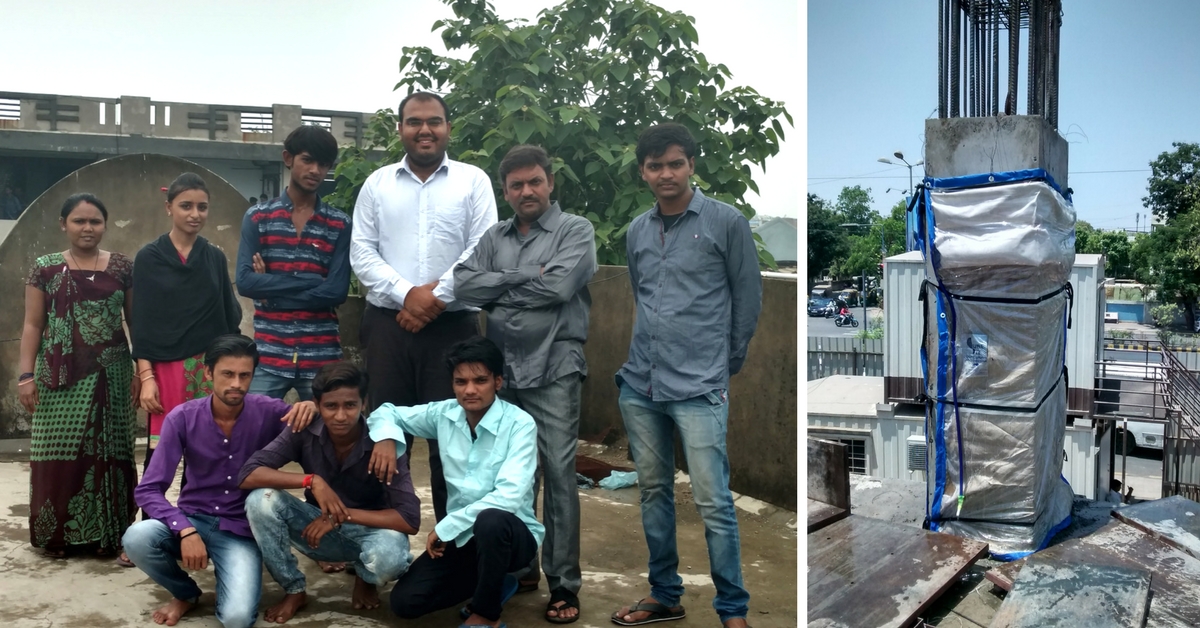 Cure It, a venture by Abhishek Mandaliya, employs a unique method known as drip curing, where limited amount of water is dripped slowly at regular intervals for curing concrete.

Every building around us stands thanks to the protective backbone called concrete.

A mixture of broken stone or gravel, sand, cement, and water, its ability to be plastic and malleable when newly-mixed, and strong and durable when hardened, makes it perfect for building large-scale to small-scale structures.

However, the key to achieving a strong, durable concrete lies in knowing the correct ratio for mixing cement and water. Under the process of concrete curing, the concrete is protected from loss of moisture, and is kept within a specific temperature range, resulting in increased strength and decreased porousness.

Though there are a couple of methods that are employed for concrete curing, the most commonly used method includes using gunny bags and sprinkling water, like in India.

These methods, however, end up consuming a lot of of water and are labour-intensive, where the curing requires round-the-clock monitoring or the effort goes down the drain.

Keeping this in mind, a construction-based startup from Ahmedabad has come up with an innovative curing method that can save up to 80 per cent of the water.

Cure It, a green venture founded by Abhishek Mandaliya in 2016, employs a unique method known as drip curing, where a limited amount of water is dripped slowly at regular intervals for curing concrete.

You may also like: This Bangalore-Based Construction Company Is Setting a Standard in Waste Management at Tech Parks

“The method takes inspiration from the drip irrigation system that is used for agricultural purposes. The flow of water is controlled so that only the necessary amount of water is used, hence saving large quantities of water,” says Abhishek, who is a civil engineer.

Abhishek, who was earlier working abroad as a project engineer, had noticed over the years that a lot of water got wasted during the process of curing, which wasn’t just limited to India, but countries in the Middle East and Africa as well, where water comes at a price.

“It takes about half an hour to fill a 1000 litre tank with water, all of which is used continuously to sprinkle over the concrete. This process is repeated multiple times a day, thus wasting thousands of litres of water daily. And this is the story of just one small-scale construction site,” he states.

Prodded by the thought of saving water, Abhishek decided to take some time off to research different cost-effective methods.

“After a year of research, my friend, Jitendra Kadia, and I came up with a solution of drip curing, which is not only the cheapest but also the best so far,” he says.

So, how does the method work?

The innovation includes multi-layered sheets comprising water pockets, gunny bags (made from jute) and PVC (Polyvinyl Chloride) films that are tightly bound to each other. Through the PVC film, only the required water trickles down the concrete, while the jute in the sheet helps in maintaining the cool temperature.

“Filling the pockets only once in 24 hours, the process is carried forward throughout the day with the water being dripped down through the film. A cubic meter of concrete column requires about 20 litres of water through this method, which equals one bucket and takes only half a minute to fill, compared to the 1000 litre tank,” Abhishek explains.

The sheets can be easily attached to the concrete surface using binding wires or belts.

Once filled with water, these automatically start with their curing action on concrete. Since the amount of water that is dripped is optimal for curing, the quality and strength of concrete stays perfect.

The innovative method not only saves water but also saves energy, labour, time and cost.

You may also like: Green Products to Be Made from Construction and Demolition Waste in Indore

“Saving about five times the electricity that is used for pumping water and about 4-5 times the labour hours, the method also allows for re-usability, multiple times through the sheets, unlike the gunny bags that go out of service after a month in use,” he adds.

Over a year into practice, the startup and its innovative method is slowly gaining momentum and the team has been approached by firms based in the Middle East. “We hope that our method finds more takers in India because the water wastage practices really need to be checked here,” he says.

You can reach out to the folks behind Cure It at mandalia.abhishek@gmail.com or call on 9979873587.