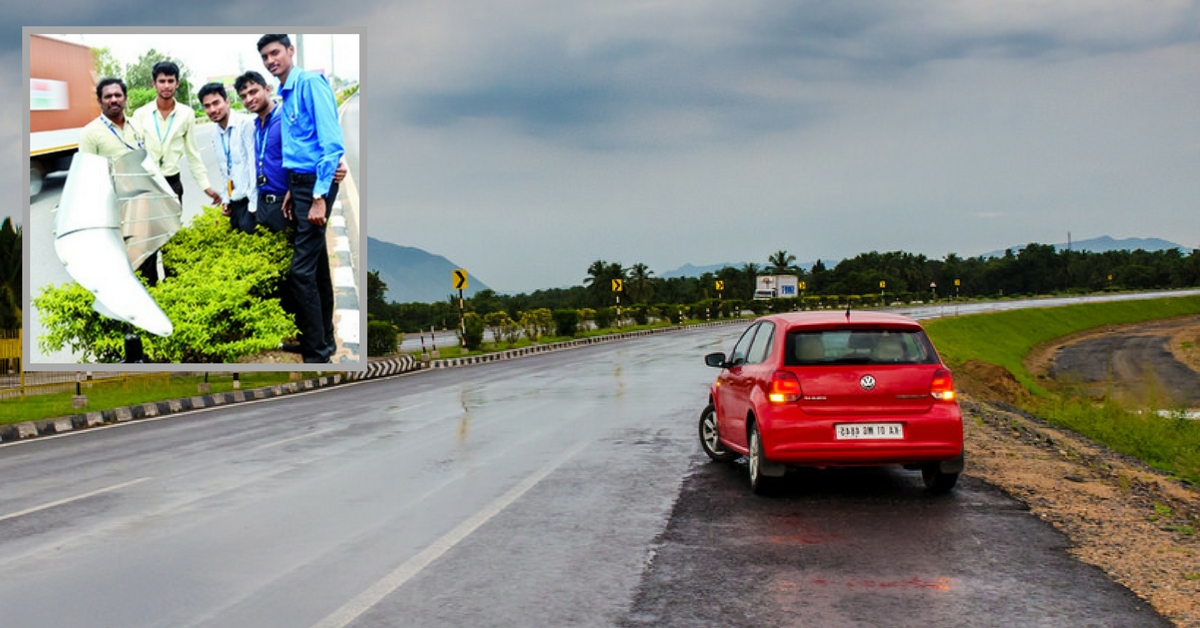 The students claim that the model could potentially help ease an energy crisis, because the freely available wind energy is renewable.

Ever travelled on Bengaluru highways and felt a powerful wind turbulence as vehicles speed by? These four engineering students have come up with an innovation that will harness this wind energy to produce electricity.

Prashanth D, Prathik S, Sampath Kumar B and Rahul B, final-year mechanical engineering students from Sri Venkateshwara College of Engineering (SVCE), aim to tap the easily available wind energy from the road to the airport using vertical wind turbines that can generate electricity of up to 45 volts.

This will reduce dependence on conventional power sources and generate electricity to power streetlights, caution lights and traffic lights.

“The system works on the concept of converting kinetic energy from wind into electrical power. The turbines – to be placed on the highway dividers – are designed to rotate even at low wind speeds (1.5m/s). Since highways are designed for 40kmph, 60kmph and 80 kmph speed lanes, these turbines are placed on the dividers. Vehicles going at 80kmphr are the major source of power for these turbines,” explained Prashanth in an interview with the Bangalore Mirror.

These vertical axis helical turbines are compact and fully fabricated in aluminium. They can constantly generate electricity of 25-45 volts, which is stored in batteries and used for various applications.

“The power generated from these small turbines can store electricity for small purposes. But if the government can adopt this idea and build it on a larger scale, the city can be lit 24/7,” said Prathik.

The students claim that the model could potentially help ease an energy crisis, because the freely available wind energy is renewable. “These turbines can be installed on long high-speed expressways, like the Golden Quadrilateral. A considerable amount of electricity can be generated this way,” added Prashanth.

Read more: No Tractors, No Pesticides & No Tilling: A Zero-Investment Method That’s Helping Farmers Save Big!

Explaining the use of the turbines within city limits, Sampath explains, “Within the city, there are a lot of high-rise buildings. These detachable turbines can be kept on terraces or balconies to generate and store power even for domestic use.”

Emphasising that we are heading towards a world of automation, Rahul says there is a need for batteries everywhere.

“If we look at production units, there too is a requirement for continuous power supply. Applied on a larger scale, this concept can come in handy. Also, in the next 15 to 20 years, electric cars may take the lead; we can use this energy for battery charging. We could set up battery-charging stations,” he told the publication.

The students also proposed the use of this technology in rural areas for agricultural purposes. Under this, the plastic-based dividers with vertical turbines could replace the current ones.

The student team worked under the guidance of Prof Shridhar Deshpande. “They studied all possible applications of turbines,” he said.

The total cost of the unit assembled by the students inclusive of the circuits comes upto about Rs 6,500. “If mass-produced, the expenses could come down substantially,” said Deshpande.

Chief Executive Director of SVCE, Shashidhar Muniyappa, is hopeful about the innovation. “If we are given permissions from NHAI, we can install these turbines and see how effective they are. We hope one day, we start using natural energy for all purposes. These students did many trials before they came out with this idea,” he said.