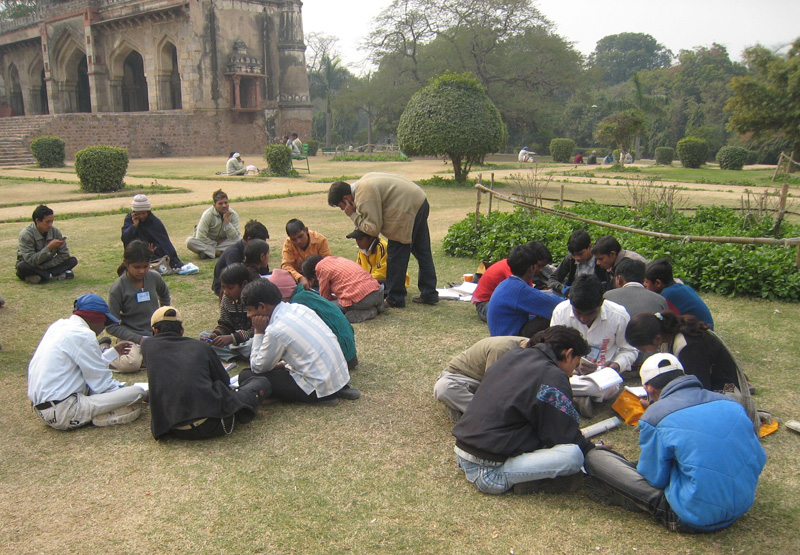 In 2006, ETASHA Society was borne out of the belief that it is very important to help young people in developing new skills, by giving them access to relevant vocational training and connecting them with employers. The NGO has played a great role in enabling the youth to take control of their own careers and lives, and to help their families break out of the cycle of poverty.

Dr. Meenakshi Nayar, the President of ETASHA Society, is a Doctorate (FPM) in Organisational Behaviour from IIM Ahmedabad and a Masters in Industrial Psychology, who always wanted to make a difference in the lives of the less fortunate because she believes that success and achievement should be the results of effort rather than birth. This very conviction led to the creation of ETASHA in 2006.

We proudly bring on board Dr. Meenakshi today to share her thoughts:

It is my personal endeavour to expand and enhance the outreach and quality of ETASHA’s programmes. We started addressing only girls in the beginning in the areas of career guidance, sexuality education and life skills development. Later on, we realized that boys deserve to be talked to as well. Career growth emerged out as the major concern of every youth. So ETASHA’s vision was chalked out as working for every young Indian to be employable, have self-worth and lead a dignified and productive life.

And if our readers are wondering what ETASHA means, it is the acronym for Enabling and Training Adolescents for a Successful and Healthy Adulthood.

We aim to help young people to make the right choices at the right time, and enabling them to lead successful and healthy lives. ETASHA commits to its mission by being a catalyst in skill-building amongst youth from socio-economically weaker strata of society, using innovative methods of engaging with them. I would like to clarify that ETASHA works in the development sector for the benefit of youth, but we do not give charity. We are working by seeking support from Funding organisations and individual donors but we do not wish to be dependent on charity.

In last so many years, ETASHA has worked on many significant programmes like –

Meenakshi told us about a few more:

Our current Project Pragati is funded by FICCI Ladies Organisation (FLO) and Gail India, the largest state-owned natural gas processing and distribution company in India. This project is working to train all 550 girls at ITI, Siri Fort, New Delhi enrolled in the first year of 14 trades by enhancing their spoken English and behavioural skills and is being run from dedicated training rooms at the ITI. Then, we also have a Project Umang which is a Spoken English and Computing program for teachers at ITI Gurgaon. This one is funded by donors who contributed to ETASHA’s campaign during the 2012 Airtel Delhi Half Marathon.

Meenakshi feels that India’s unemployment and underemployment problem is particularly affecting those from lower socio-economic communities.

Poor families remain in poverty simply because they do not have the necessary skills to survive in competitive times of today. ETASHA wishes to see them joining the organised sector which will provides them access to better salaries, cleaner and safer working conditions, fixed hours, job security, career growth and often other benefits such as free transport, healthcare and insurance. And our concept to achieve the same is simple – we work with industry to identify growth areas and skill gaps and train young people from disadvantaged communities to begin careers in those industries.

Here’s a video explaining why ETASHA was founded and why training of disadvantaged young Indians is so important for the development of India (if you cannot watch the video below, please click on this Youtube link):

ETASHA is running Career Development Centres (CDCs), dynamic training hubs in slum communities in south Delhi, from which their community mobilisation team engages with local youth and their families, community and religious leaders as well as other NGOs. They are also working with students of other vocational training providers to improve their employability skills through our programs and also manage students’ placement, best illustrated by Project Vayu, a successful program for Haryana- based Industrial Training Institutes (ITI) supported by Maruti Suzuki. Many NGOs have also partnered with ETASHA to train youth in their communities.

ETASHA indeed is doing a great job and we applaud the whole team for their benchmark role. No wonder, students and trainees have many high words for the role played by it. Like a student quotes – ‘Ek umeed hai ETASHA…Ek josh hai ETASHA. (ETASHA is a hope, Etasha is a zeal).’

This post is an adaptation of an article first published on Halabol Voices, which is an initiative of Halabol – a platform for initiating change.