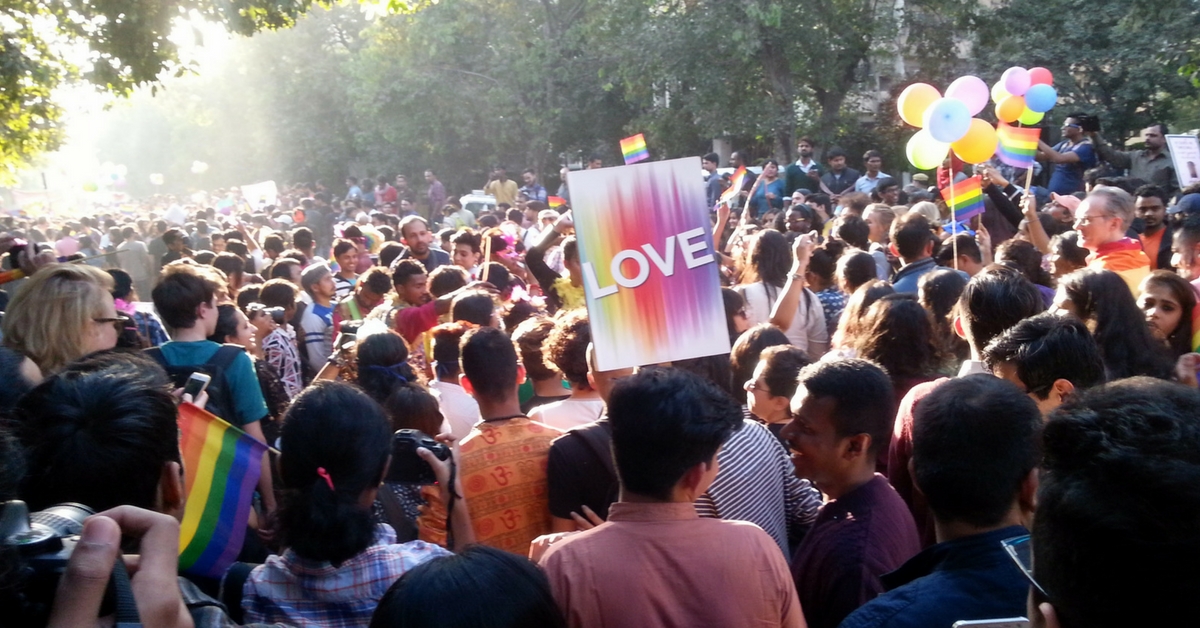 The 9th edition of the Delhi Queer Pride Parade held on Nov. 27 saw hundreds of revellers gather in Central Delhi.

On a recent Sunday afternoon, several people spilled out of the coaches of the Delhi Metro at Barakhamba station in central Delhi and found their way to a spot not too far away.

In the heart of Delhi, on Nov. 27, a banner was raised announcing the celebration of the 9th Delhi Queer Pride Parade.

Under the watchful eyes of police officers, who stood uneasily at the periphery of the gathering, the group of few dozens gradually swelled into hundreds. It was a day to celebrate fluid sexual identities, gender identities and to show support for a group that continues to be marginalized and vulnerable in Indian society.

The setting off of a confetti-filled cracker sent a thrill through the waiting crowd and marked the start of the parade from an intersection on Barakhamba Road.

The nebulous mass of people lurched in the direction of Jantar Mantar, their final destination.

They marched under a colourful rainbow made of balloons. Here was a space where it was alright not to conform, to express oneself through eclectic attire, body art and tattoos. Rainbow-colored flags were handed out, along with customized badges and masks.

Most people politely turned down the masks.

The march was a vibrant mix of young college students, middle-aged folks, and a smattering of older folks. Some were loud and brazen, others shy and sophisticated, some danced unabashedly and some had to be coaxed into the celebrations. Even a handful of foreigners were spotted in the crowd, along with many media persons and photographers. There was a lot of handholding, embracing and exclamations of joy.

The parade had the zest of a wedding celebration, complete with drum beats and dancing. But in the midst of the festivities, there was also sloganeering. The chants loosely reflected the demands put forth by the Delhi Queer Pride Committee, which organised the march.

They were demanding an end to discrimination on the grounds of age, sex, class, caste, religion, gender identity, and sexual orientation.

The marchers also called for the implementation of the Supreme Court’s judgement recognising the third gender. Recently Indian Railways introduced a third option in the gender column of its railway reservation form. The organizers also asked for the withdrawal of the Transgender Rights Bill in its current form.

They demanded the repealing of laws that are considered discriminatory to people who identify as queer – for example, Section 377, which criminalises homosexuality.

On its Facebook page, the Committee put out a statement that said:

So when we take to the streets on Sunday, we will walk as queer people who imagine a queer world that is anti-caste, feminist, sex and body positive. We will walk in support of a rising tide of Dalits, Muslims, women, disabled, Kashmiris, people in the North East, adivasis, academics, filmmakers and students in resistance against the forces that threaten our freedoms.

This Pride, we resist freedoms that come with conditions and assert justice for all. If some of us aren’t free, no one is.

As the parade wound down in the early evening, many of the participants stepped back into their mundane everyday lives, back into a world where even travelling by Metro required deciding between being identified as man or woman.