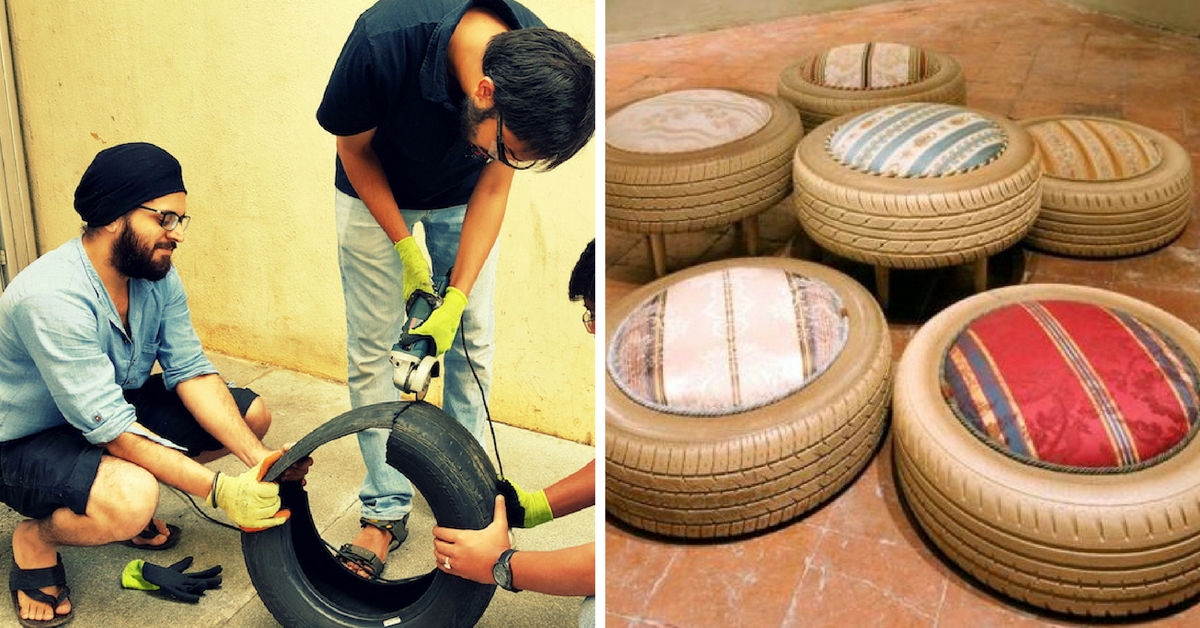 How an architecture company founded by IITians is using scrap tyres as construction material to build playgrounds and a library for underprivileged children in Bangalore.

In urban areas, pressure from the growing population, and the resulting congestion and pollution, have robbed children of spaces where they can play, mingle with peers, and get much-needed physical exercise. In a bid to provide young ones with safe and open spaces in cities, five architecture graduates from IIT Kharagpur are using scrap tyres to build play areas.

“The idea of building a sustainable playground for kids came to me when I was interning under a reputed architect named Aziza Chauni in Morocco. She worked with recycled items a lot,” Souradeep says.

Souradeep and his team also learnt from news reports that around 981 million tyres are either burnt or pile up in landfills around the world every year.

Recycling non-biodegradable material like tyres, therefore, would not just help safeguard the environment but be cost effective as a building material too.

“Traditionally, mass produced recreational equipment for building a playground would cost a minimum of Rs. 2 lakh, but since we are using material that is considered trash by some, we have been successful in setting up playgrounds for just Rs. 20,000,” Souradeep says.

In 2014, the company built its first low-cost playground at the Disha Seema Care Centre located on the IIT-K campus. The initial assistance for sourcing old tyres came from Michelin tyres. Alumni from the team members’ college, who were impressed by the idea, also contributed financially. “For other projects, we visited garages and godowns to collect scrap tyres,” Souradeep says.

You may also like: Kerala Govt. Will Now Pay Residents for Plastic Waste and Recycle It to Make Roads. Brilliant!

One of the strengths of the company is its insistence on involving communities in the projects. Right from the beginning, the team envisioned the playground as a DIY project. “We figured it is an interesting method of building teamwork while creating safe spaces for vulnerable children,” Souradeep says.

After they set up an office in Bangalore this year, the Anthill Creations team sought out NGOs that work with underprivileged children to help them replicate the tyre playground model they piloted in Kharagpur.

Souradeep says, “We want to make children aware of important concepts like recycling and sustainability from an early age.”

The team has also partnered with an NGO called Mantra to help school children from the slums in the Padarayanapura neighbourhood.

The library will serve 850 students of the school.

You may also like: These Eco-Friendly Pencils Help Recycle Old Newspapers and Save Trees

After organising immensely successful book drives across Bangalore, the Storytime team managed to collect over 700 children’s books for this library.

They plan to cover the cost of constructing the library through a crowdfunding campaign on fueladream.com. If you want to help 850 underprivileged kids gain access to a remarkable and unique reading environment, donate here.