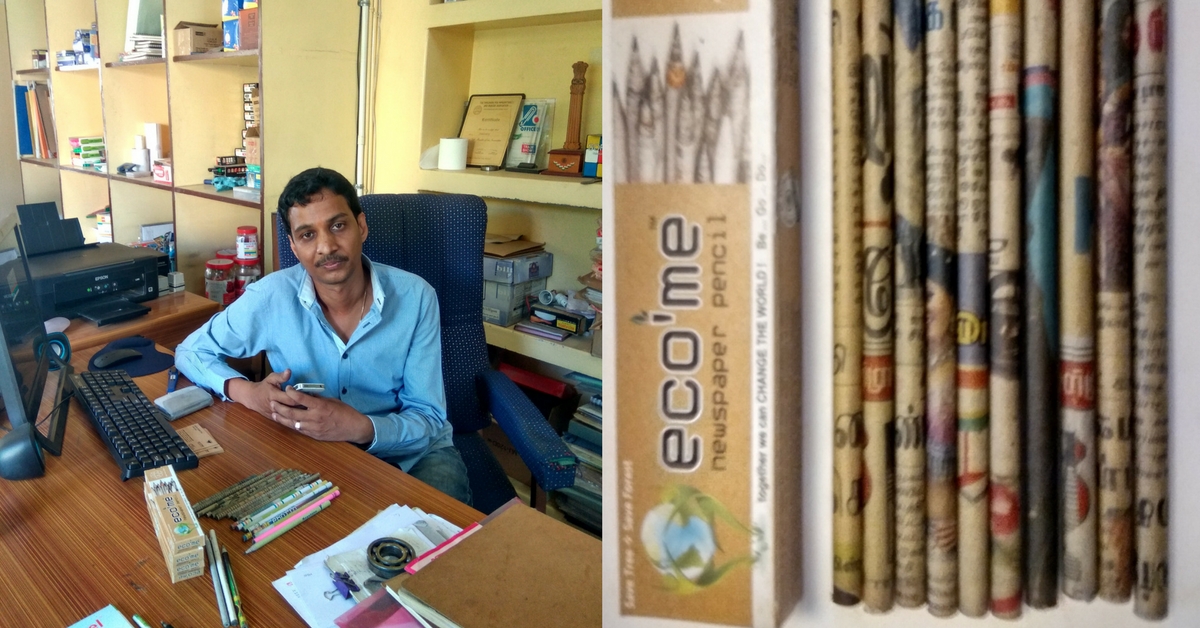 Vikash Khandelwal. is trying to introduce his eco-friendly newspaper pencils all over India. This will help reduce the use of wood to make pencils.

Vikash Khandelwal graduated from college at a time when polypropylene plastic stationery was popular in the market. He too started a business as a stationery supplier in Coimbatore, majorly supplying file covers and folders made of the same material. But a few years down the road, when the world began talking about “eco-friendly” products, Vikash too decided to try his hand at creating products that would not harm the environment. His latest creation is the most interesting of all the products he has designed and manufactured so far – pencils made out of newspaper.

“Chinese pencils made from newsprint have been in the market for a long time and are doing well, even in India. The paper used for these pencils is newsprint paper, which is the main raw material for newspapers. These pencils generally have an attractive plastic covering, which entices children. Taking a cue from this, we, at Zebra Stationery Products, decided to try making pencils using only old newspapers. For more than two years we kept experimenting with various newspapers and different glues. Ultimately, in Feburary 2015, we came up with a product that we were satisfied with,” says Vikash.

“Working on this new project was indeed interesting and threw up many surprising facts. We have found that the quality of the paper of only two Tamil newspapers is good for making these pencils. We had to experiment with various glues, as they had to be chemical free but strong too. Since most children have the habit of putting their pencils into their mouths, we had to make sure that the glue was not toxic,” continues Vikash.

All pencils are 172 mm in length and comfortably thick for children of all ages to use. The glue used is not just of extremely good quality but also gives a cushion effect to the lead so that it does not break if the pencil is dropped. Moreover, the glue has an amazing waterproofing effect on the newsprint material; it helps ensure the paper does not get soggy even if it is left in water for more than six hours at a stretch.

Vikash and his team are able to make two pencils from a double sheet of a newspaper. The newspaper sheet is cut into half, horizontally. The piece of lead, which is sourced from China, is placed at one corner and has to be stuck manually. A machine is used to tightly roll the paper around the lead and special glue is applied simultaneously and evenly inside all the layers.

The texture of the glued newspaper is such that a new sharpener can be used comfortably (for 5-6 pencils only), beyond which a little pressure has to be applied on the sharpener.

As soon as the pencils were ready in 2015, Vikash placed them in a few stationery shops in Coimbatore. Although the local market was not really for these eco-friendly pencils, word about them spread soon enough and customized orders kept the manufacturing unit busy.

“Most of the orders received were from other parts of the country and for some reason they did not like the Tamil newsprint,” he says. “To overcome this problem, a customized paper covering was put on the newspaper pencil, usually carrying the logo and the information about the organisation or the event the pencil was desired for.”

Vikash says the ECO’ME pencils have been given as return gifts at a little girl’s birthday party. He also used them at his own school reunion, gifting all his old classmates two pencils each. Many hotels place these pencils in prominent positions in their establishments and they are also given to people attending various events and conferences.

Vikash’s 13-year-old daughter Siya and others in his family helped him test samples of the newspaper pencils at every stage and their critical opinions helped him come up with the final product that is currently in the market.

You can mail Vikash Khandelwal at zspindia@gmail.com or visit his website stationerymela.com

Note: Newspaper ink is mildly toxic and should not be ingested. These pencils are more suitable for older children who are less likely to chew on them.