Bablu Martin was a cricket and football player. He dedicated his entire life to sports and to helping people. On Saturday, he lost his life trying to save three children from being buried under the debris of a building that collapsed in Maihar.

Bablu Martin was a cricket and football player. He dedicated his entire life to sports and to helping people. On Saturday, he lost his life trying to save three children from being buried under the debris of a building that collapsed in Maihar.

At around 10:30 am on August 20, Benedict (Bablu) Martin, a 40-year-old sportsman from Maihar in Madhya Pradesh, was going back home after conducting his routine coaching classes. On the way, he stopped in front of the Madhya Pradesh Housing Board building to have tea with his friends at a roadside stall.

All of a sudden, he saw the three-storey structure of the Housing Board building tilting dangerously.

As soon as he spotted a 12-year-old girl standing under the building, Babloo made a dash to save her from being buried under the debris of the now collapsing edifice. He managed to rescue her and another child too, before going back to try and save another.

Unfortunately, while the child was saved, Bablu himself never found his way back to safety.

Bablu was trapped inside the debris, buried up to his neck. It took one-and-a-half hours for the people gathered around to pull him out. Other than the efforts of these locals, no other medical help reached the accident spot. Finally, the people rushed him to the nearest hospital where his wounds were quickly stitched in a haphazard manner and he was referred to a hospital in Satna. Bablu was still alive at this point.

The ambulance in which Bablu was being transported to Satna had no medical staff. A temporary oxygen mask was placed over his mouth – it kept falling according to his older brother and a friend who accompanied Bablu in the ambulance. Due to heavy rainfall over the previous days, the road to Satna was closed. So the ambulance changed course and headed to a hospital in Katni, where the doctors declared Bablu ‘brought dead’.

“My brother did his job. The people who pulled him out from under the debris also did their job. But the authorities and the system did not! One can reach Maihar from Bhopal in 1.5 hours by air. But no doctor from Maihar reached him in those 1.5 hours. He could have survived if he was given first aid immediately when he was trapped. He saved three lives. He would have saved 30 if he was alive! As there were no medical staff in the ambulance, we didn’t even know when our brother left us,” said Bablu’s brother Rabert (Raju) Martin.

Bablu was a member of the Chattisgarh State Cricket Sangh (CSCS). He had represented Satna in cricket and soccer tournaments across the state. He also ran his own cricket coaching centre, known as Sharada Cricket Coaching Centre, where he used to teach cricket to kids for free. A dedicated sportsman, Bablu was not only good at cricket but also played football. He taught football to kids at the Maihar Sporting Club.

It was Bablu who first encouraged girls to play football and cricket in Maihar. About 35-40 girls played football regularly at the Maihar Sporting Club under Martin’s guidance. One of them will be representing the district in the state level football championship soon.

“Martin was a gem of a person. I knew him since childhood and he was the one who taught me wicket keeping and batting. He was a big fan of cricketer Azharuddin. He followed Azhar’s style in fielding and batting and Kapil Dev’s in bowling. You would think it was Azhar who was fielding if you saw Bablu on the cricket field from afar,” said Islam Ahmed Mansuri, a close family friend of the Martins.

Bablu had no interest in academics from early on in life. His parents sent him to five different schools and even a boarding school in Allahabad. But all he wanted to do was to play cricket and other sports. Finally, Bablu left his studies altogether after Class 8 and became a full time sportsman. He started coaching children in cricket and football. He was so crazy about sports that if no one helped him financially, he would spend his own money to buy sports equipment for his students and arrange for their transport to matches outside Maihar.

In a country where academic achievement is highly prized, Bablu did his best to encourage children to play sports. “Once, Bablu was suffering from malaria and had been put on a drip. But when he heard that there was a tournament taking place in town, he removed the drip himself and took off from the hospital without telling anyone,” recalled Raju fondly.

Chief Minister Shivraj Singh Chauhan has announced that the government will pay Rs 5 lakh to Bablu’s family and give a government job to one family member. He has also promised to fulfil the family’s wish of naming a sports complex in Bablu’s honour in Satna, as encouraging sports as a career for the coming generations was Bablu’s only dream.

Bablu’s mother and wife are still in shock and could not speak a word. His two sons, 6-year-old Vaibhav and 4-year-old Ahem still feel their father has gone for another tournament and will be back soon.

“Up until 4 days ago we were all upset with my brother – that he doesn’t take any responsibilities at home, does nothing to help financially, that he just keeps playing and helping others. But we didn’t know what great things he was doing. We came to know after his death that he helped people so much. All his students, including the 40 girls who he taught football and cricket to, came to the graveyard for his funeral. We are all proud of him for helping so many people all his life, for encouraging children to take up sports and finally, for giving up his life to save three children. Not just me, any brother would be proud to have such a brother who left the world helping someone and became immortal,” says Rabert Martin. 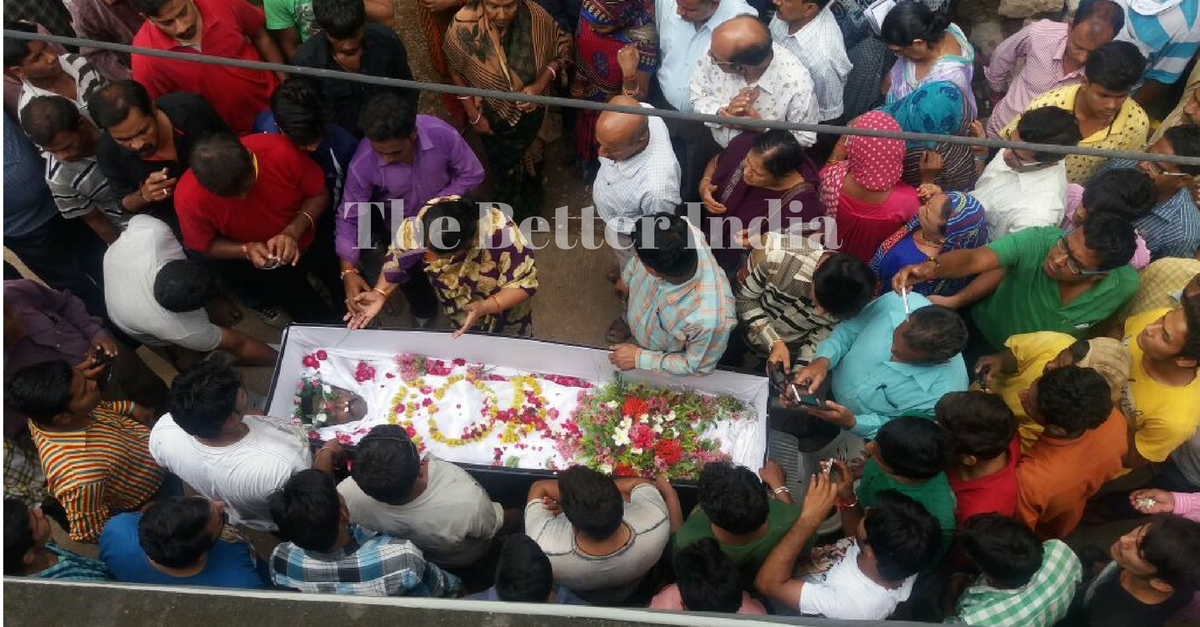 You can write to Rabert Martin at rabertrtpl@rediffmail.com .