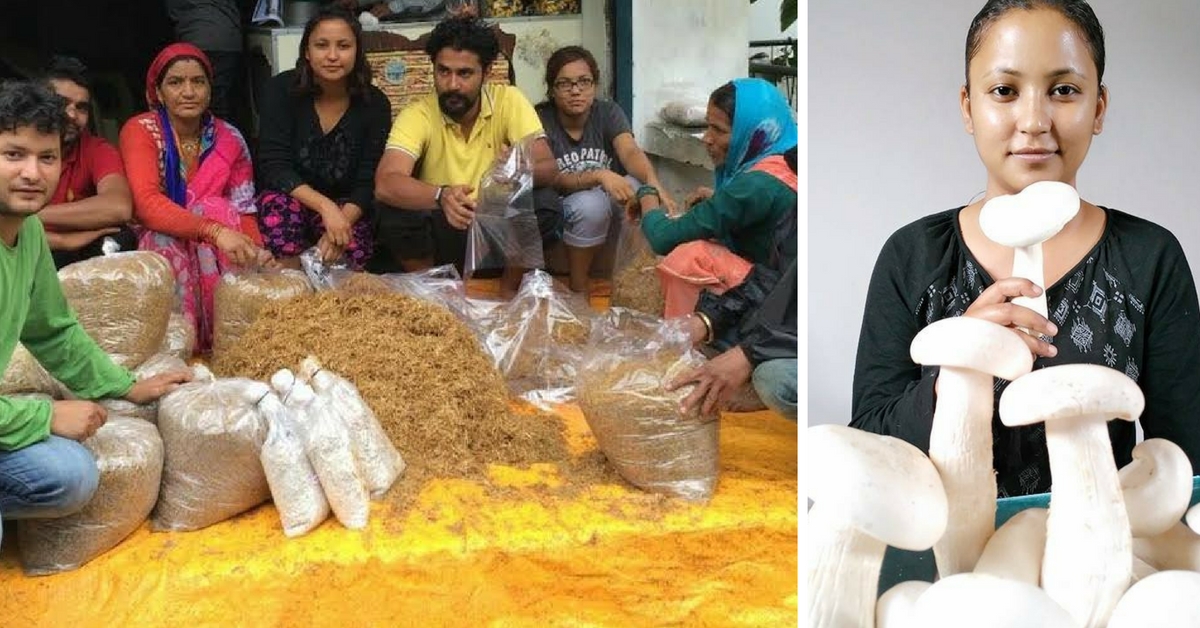 Divya Rawat is using mushroom cultivation as a way of curbing migration and providing livelihoods to people in Uttarakhand. This is also helping repopulate many ‘ghost villages’ in the state.

There are just three families in Seriadhar village in Uttarakhand. They were left behind by the others who migrated to cities in search of better livelihoods. Not everything turned out rosy for these migrants though – they had to work in the dhabas and tea stalls of Delhi, doing menial jobs and sweating it out for a pittance.

Divya Rawat was deeply troubled to see the fate of these migrants from her home state. She came from Uttarakhand to Delhi to pursue her undergraduate and Master’s degrees in social work. After that, she found a job in a leading NGO, where she worked on human rights issues. It hurt her to see people from her state living miserable lives in the city while the villages back home turned into ghost villages. She wanted to do something about this situation and the big push came when Uttarakhand was hit by the tragic floods of 2013. Divya immediately quit her job and went back to Dehradun. Her plan was to try and revive decent livelihoods for the people of Uttarakhand. She wanted people to find employment and lead dignified lives within the state. And she also wanted those who had left for the cities to come back home.

“Sometimes the best solutions lie in the simplest of things,” says Divya, who found her solution to the big problem in growing mushrooms.

Why mushrooms? While a farmer earns Rs. 8 to 10 per kilogram from selling potatoes, he/she can earn Rs. 80 to 100 per kilogram from selling mushrooms! “This price difference can change the lives of farmers. I decided to make mushroom growing a household project. I wanted the cultivation to be made simple so it could be adopted by as many people as possible. I researched, took training in growing, learnt about, and experimented with mushrooms. Then I zeroed in on the best varieties that can be grown in the weather conditions of Uttarakhand, with the humblest of infrastructure,” adds Divya.

Divya used bamboo racks for vertical cultivation, eliminating the need for large spaces and costly metal structures. She decided to grow three varieties that were suitable for Uttarakhand – button, oyster and milky mushrooms. These varieties can be grown indoors in all seasons and do not require air conditioning.

“If you have a small room to spare, even under a thatched roof, you can grow mushrooms without any hassles all through the year,” says Divya.

Divya’s family had faith in her confidence and pooled in money to help her start Soumya Foods Pvt. Ltd. She started growing mushroom in large quantities and provided employment to many. The market demand for mushrooms was high – Divya and her mushroom entrepreneurs had no difficulty in selling their produce.

Also Read: The Engineer From Bangalore Who Created Alternative Livelihood Options For Villagers In Odisha

Next, Divya spent some time aggressively training people all over Uttarakhand. People from around the country also started to come to her to learn about growing mushrooms.  She helped people become entrepreneurs with an investment of just Rs. 50,000.

“If they can’t invest this amount, I encourage them to take a bag of mushrooms from me and learn how to grow them. I inspire them and guide them so they can learn and make change possible,” says Divya passionately.

While her company has started making profits in just three years and the number of mushroom farmers in Uttarakhand has increased several fold, Divya has not forgotten the ghost villages. Along with her friends, this 26-year-old began identifying ghost villages and started mushroom production units there. In the village of Seriadhar, for instance, where people were desperate for livelihoods, Divya has brought about change. People come to the village to buy mushrooms and learn how to grow mushrooms now. Some migrants are even returning  to the village.

Reverse migration might not happen very soon but Divya is hopeful that mushroom farming will eventually change the lives of villagers and farmers in Uttarakhand drastically.

You can email Divya at – rawatd064@gmail.com. Check out Facebook page of Soumya Foods.