A lot has been said of BPOs. They have changed people’s lives and brought a modicum of hope to the lesser privileged sections of society that was denied for so 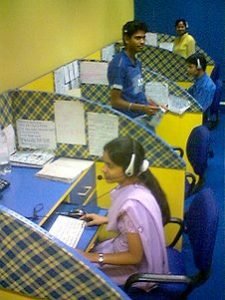 A lot has been said of BPOs. They have changed people’s lives and brought a modicum of hope to the lesser privileged sections of society that was denied for so long. However, till now the story was mostly restricted to urban India. Thanks to the efforts of a few like an enterprising District Collector in Tamil Nadu, Santhosh Babu and an economics graduate straight out of a US college, Kartik Raman, rural India now has an opportunity to be included in the BPO boom, and avail of alternative and better sources of income than what they could eke out from their meagre resources.

Kartik, along with 2 others, started a rural BPO in Bagad village in Jhunjhunu district if Rajasthan with 10 women, many out of class X and some graduates. A year later, the BPO called Source of Change boasts of 30 more employees earning between Rs.3500 and Rs.7000. Kartik plans to expand to more towns, recruiting about 1000 employees by 2012.

When Santhosh Babu decided to open a BPO for his collectorate, he recruited and trained villagers who had failed class X. The first BPO was of 100 seats capacity and was started with a loan of Rs.20 lakhs from the District Rural Development Agency. Its biggest client today is the US All State Insurance. Sreelatha Menon reports in Business Standard:

The most important gain of the BPO experiment in Tamil Nadu is that it recruits mostly people in villages who have failed Class X as well as graduates and pays both equal salaries of up to Rs 5,000.

After the tremendous success of the BPO experiment, Babu has been made the Managing Director of Electronics Corporation of Tamil Nadu (Elcot) to expand his operations to all 30 districts. Elcot has started a rural finishing scool where 7000 dropouts have already been trained, and plans to tender applications for franchises in every village. Every franchisee has to profitable and uncompromising on quality. The model is already serving as an inspiration for other states to embark on a similar development path.

We wish these dedicated few all the success in their endeavours and hope many more will join their ranks in improving the lot of all the far flung villages in India.

Read the rest of the story here.
Image Courtesy: Wikipedia