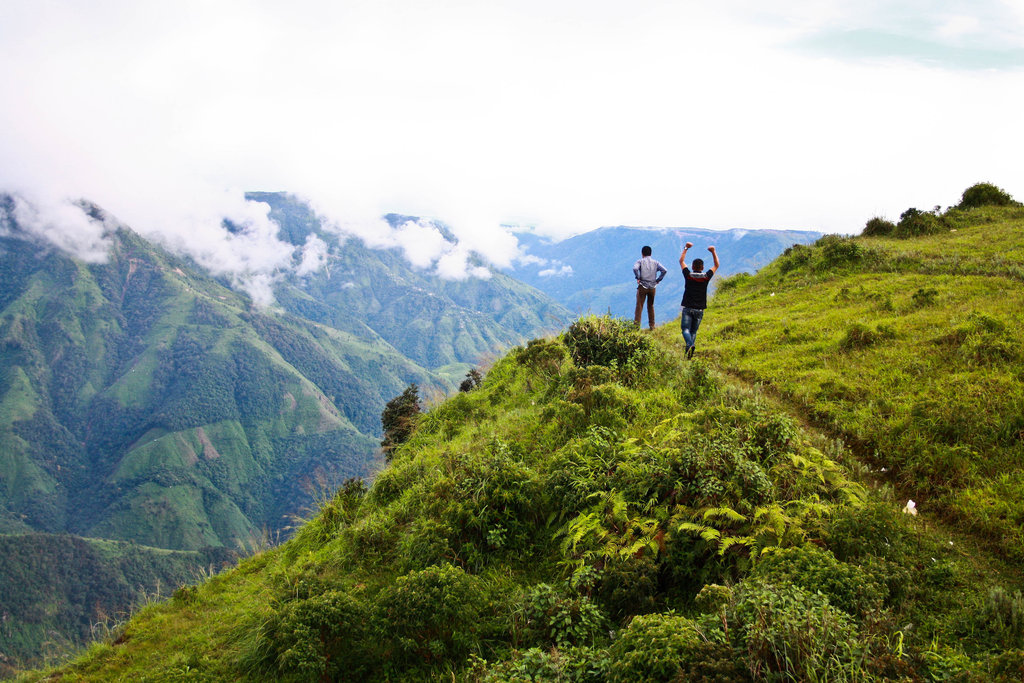 The awe-inspiring vistas of this hidden canyon will make you fall in love with Meghalaya all over again.

Perched in the East Khasi Hills of Shillong, Laitlum Canyons is a little-explored haunt of the mountainous state of Meghalaya. Laitlum translates to ‘end of hills’ and this sublimely beautiful hilltop appears to be true to its name. At Laitlum, all one can see are breathtaking gorges and steep winding stairways that snake their way down to the lush valley.

This is the reason why, for a bird’s eye view of Shillong’s magnificent surroundings, there is no better place than the Laitlum Canyons.

The following pictures capture some of the raw beauty of this relatively undiscovered gorge that is ideal for treks. But for those with adventure in their hearts and dreams of distant mountains in their eyes, only an actual trip to this majestic hill paradise will suffice.

1. The Amphitheatre of Meghalaya

The scenic hill slopes of Laitlum are often called the amphitheatre of Meghalaya. Unending as far as one can see, they are painted in a multitude of hues – from earthy browns and verdant greens to blushing reds at dawn and dusk.

The beautiful rocky trail to Laitlum is a trekker’s paradise. The terrain is a bit difficult to navigate  but it has some of the best views in the world and the freshest air one can breathe. This is a trek worth adding to your bucket list of trekking expeditions in India.

3. Living On the Edge, Literally!

Narrow and uneven rocky paths lead to several small slate-roofed houses perched at great heights of the canyon, each with its very own picture perfect view. The residents literally farm on the edges of these mist-shrouded cliffs that plunge sharply into the valley below.

4. The Stream of Your Dreams

The gurgling Laitlum stream and its quaint wooden bridge invite travellers to just stand and stare at the magical landscape surrounding them. Get a traditional Khasi lunch packed at a local eatery for a picnic at this exquisitely beautiful 270-degree viewpoint that provides a glimpse of four waterfalls !

5. In The Abode of the Clouds

Meghalaya is called the ‘abode of the clouds” and at Laitlum Canyons one can experience why. Blanketing the entire canyon in an ethereal white shroud, the mist swirls and moves with the wind.

The flat grassy hilltop overlooking the silent and peaceful valley is the perfect place to bask in some glorious mountain sunshine. For those who forgot to pack their lunch, a lone shop provides succour in the form of snacks and steaming hot chai at the entrance to the vast meadow.

Once atop Laitlum Canyon, one can see Rasong, a small hamlet nestled deep in the lush green ridges of the Laitlum gorge. The 300 residents of Rasong rely on an old ropeway pulley to transport food grains and essential commodities down to the valley and up to the hilltop.

A long steep stairway, hewn out of the mountain and lined with fern covered rocks, winds its way down the verdant slopes to the tiny hamlet of Raslong. This stairway, which passes through sprawling bamboo plantations and colourful bursts of orchids, is the only route between the village and the nearest market, and has 3000 steps !

9. The Hardy Locals of the Khasi Hills

On days when the rusty old pulley is out of order, the sight of locals carrying traditional bamboo baskets (filled with all sorts of stuff) as they climb up the steep mountainside, is very common in Laitlum. The main cash crop of Rasong is the broom plant, which the locals use to make traditional brooms sold in the markets of Shillong.

10. Knocking at the King’s Door

The village of Smit in Laitlum is the traditional seat of power of the Hima Khyrim, a sub-tribe of the Khasis. The village also has a traditional house, the Iing Shad, that belongs to the King of the Khyrim and is believed to be more than 100 years old. In autumn, the striking Nongkrem dance is performed outside this royal residence.

In recent years, these picturesque canyons have also captured the interest of some Bollywood producers, with the upcoming movie Rock On 2 being filmed here. But, despite its gradually increasing popularity, Laitlum Canyons still remains a little piece of heaven that few have heard of and fewer still have visited.