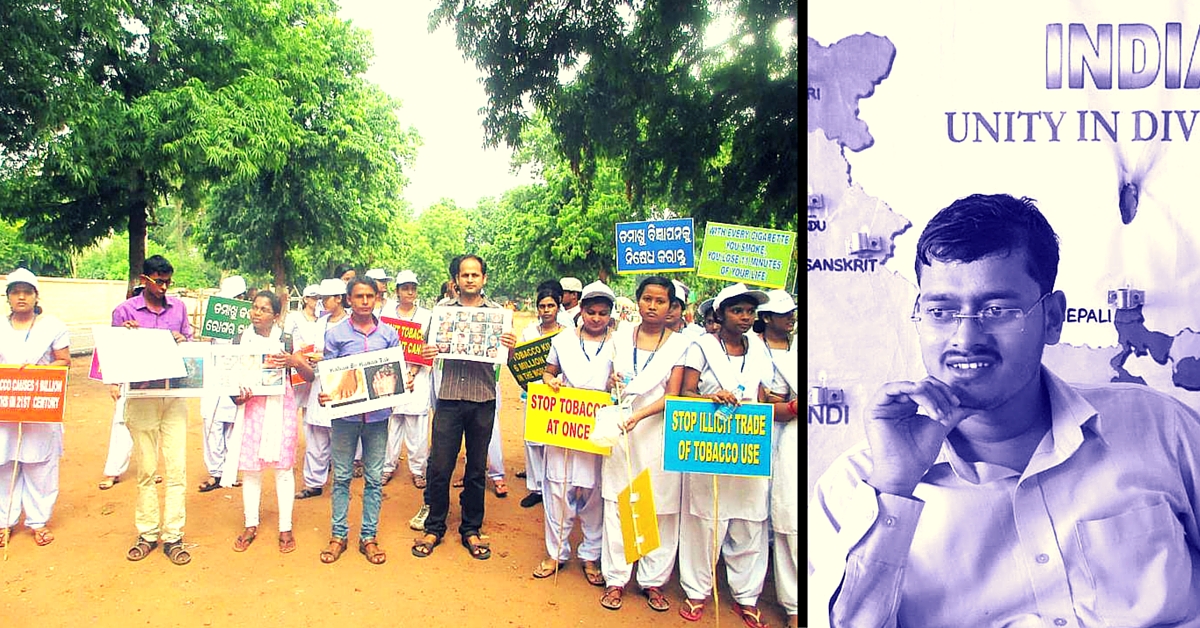 Meet Imran, a young Odisha resident who has taken the battle against tobacco addiction in the state as a personal crusade and is fighting it with all his might.

“This campaign is like our addiction in the fight against addiction. We have decided to donate one rupee and one hour for the country each day,” says Md. Imran Ali about his crusade against tobacco and alcohol addiction in Odisha.

Imran came across the menace of tobacco in the city while pursuing his Master’s in Social Work degree. During one of his field visits to the Shantipali slum in Bhubaneshwar, he was shocked to see kids as young as 10 years old addicted to tobacco products, especially gutka. On further investigation, he found that the easy availability of tobacco products in the market and ignorance of parents make it easy for children to access these items. This addiction, in turn, becomes a stepping stone to other addictions, like alcohol and drugs, as the children grow up.

The gravity of the situation and its irredeemable impact stuck with Imran. He ended up writing and self-publishing a book named Bloody Gutka, in which he talks about the immense harm done by tobacco products.

This was followed by awareness programmes that he organised with his friends in the slums, where they talked to parents about this problem. Gradually, he brought together some like-minded young people in Bhubaneshwar to form Nasha Mukti Yuva Sankalp (NMYS), a voluntary campaign against tobacco/alcohol addiction and substance abuse.

The group comprises about 30 young people who work on a voluntary basis to contribute towards the cause whenever they can. They started by conducting awareness programmes in schools and colleges across the city, slowly moving on to advocacy in a planned manner.

“We noticed that many OMFED (Orissa State Cooperative Milk Producers’ Federation Limited) booths in the state were turning into tobacco and smoking hubs. One could find tobacco products more than milk in many of these booths. I, along with a friend Jitendra Kumar Sahoo, filed a PIL in the Odisha High Court, seeking a ban on the sale of tobacco products at milk parlours,” says Imran.

You May Also Like: How One Man Turned A Village Into An Alcohol And Tobacco Free Zone

A senior HC advocate, Biren Tripathi, agreed to take up the case for free and it resulted in victory. The court ordered a ban on the sale of tobacco products in Odisha milk parlours in 2011.

“Winning the case gave us a lot of confidence. I felt that when you are doing some good work, it gets noticed and recognised,” says Imran.

Soon, the group started campaigning for a complete ban on the sale and business of gutka in the state to address the rising number of mouth cancer cases. According to reports, smokeless tobacco accounts for more than 40% of all cancers in Odisha. Over 43% of the population consumes smokeless tobacco in one form or the other.

When awareness drives and online campaigns did not lead to any positive impact, they filed another PIL in the High Court. This time, an NGO named CLAP (Committee for Legal Aid to Poor) stepped forward to help them. NMYS was successful once again and the state implemented a complete ban in 2013.

It was shown in 2,500 colleges in the state with the help of the youth wing of the Odisha government. Imran also wrote a book with the same name, which was followed by yet another documentary called Silent Killer. It is a short documentary that shows the effect of tobacco consumption on families in general and Imran circulated it on WhatsApp to reach more people.

You May Also Like: One Doctor Is Quietly Building a World-Class Cancer Hospital for the Poor in Assam

Members of NMYS also assist mouth cancer patients by directing them to the Acharya Harihar Regional Cancer Centre that treats underprivileged people for free. Imran has started a counselling centre for tobacco users with one of his friends B Nayak, who is a doctor.

“Mouth cancer does not develop suddenly. It has many warning signs and symptoms, which if caught and medicated early, can help in the treatment of the disease. We focus on the preventive part of the disease at the counselling centre,” he says.

Imran feels blessed that he has people who are willing to help his team by contributing towards the cause in kind. Professional editors, voice-over artists, cameramen, etc., agree to volunteer for his movies for free.

All the members of the group work on a voluntary basis. They come from varying backgrounds – education, health, business, etc. Imran too works part time as a teacher in a college. He is originally from the Bhadrak district of Odisha but moved to Bhubaneshwar after completing his graduation in sociology.

Imran decided to dedicate his life to social work when he applied for a post-graduation course. No bank was willing to give him an education loan. He wrote to the then President of India, APJ Abdul Kalam, seeking help. And the President’s office replied with a notice to the bank demanding immediate attention. “I received the loan within two days. The incident made me think that if the first citizen of the country is so dedicated towards the welfare of common people like me, then my duty and responsibility toward the country become even greater,” he says.

“Every time we take patients to the hospital and help in their treatment, they show so much gratitude that I feel richer than any millionaire. It is a traumatising experience for people when they come to know about cancer. It is important for someone to support them and give them courage in such times. That is why I have decided to keep doing what I am doing,” he concludes with a smile.

You May Also Like: This Doctor Invented a Rs. 50 Device To Give Throat Cancer Patients Their Voice Again

You can contact Imran by writing to him at imranswp@rediffmail.com.