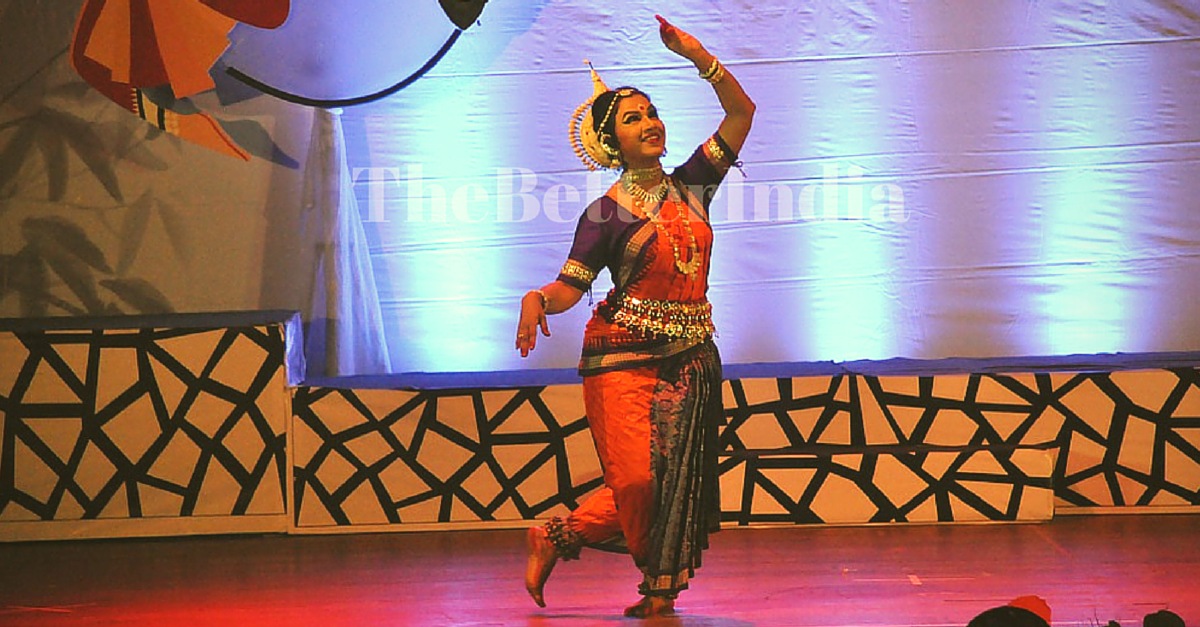 This article is part of the #KhudKoKarBuland series & is made possible by Birla Sun Life Insurance.

Shubhada Varadkar was diagnosed with cancer at the age of 40. A talented and passionate Odissi dancer, she fought the disease for the love of her art and her desire to keep dancing and creating something beautiful. This is her story.

“If you ask me, I don’t actually remember when I started dancing – I used to dance even when I was a child. Classical dance for me is not just a form of entertainment but a way of making other people happy. At a very young age, I used to observe one of my neighbours practicing Bharatanatyam and I was always very attracted to it,” recalls Shubhada Varadkar, a renowned Odissi dancer whose love for this art helped her fight cancer and emerge triumphant.

Shubhada was in London for a performance in November 2006. While dancing on the stage, she started feeling uneasy and realised that she was bleeding.

“I was 40 years old at that time. While performing, I started feeling some discomfort. But there was no pain at all. My body had tried to give some similar signals earlier as well but I had ignored them,” she says.

Wrapping up that tour early, Shubhada returned to Mumbai and went for a check-up. The sonography revealed a 10-inch long tumour in her abdomen. It was too big to be removed by laser procedure and the doctors told her that she needed surgery. However, they had no way of finding out before the surgery if the tumour was malignant or not.

“I had a performance coming up and the only thing on my mind was that I wanted to dance. So I wanted the operation to remove the tumour done before that.”

The operation went well. Her tumour was sent for biopsy and on the fifteenth day after the surgery, Shubhada was performing once again.

“It was not easy to dance right after surgery. But I wanted to do it. The show had been planned and booked earlier so I did not want to cancel. While I could not practice physically, I used to plan the entire show in my mind. At that time I did not know I had cancer,” she says.

The final report revealed that she had two malignant tumours, one in the ovary and another in the uterus. Chemotherapy sessions started immediately. It was an eight month long journey, involving long and intense periods of chemo and radiation.

But all through this time, Shubhada did not give up dance. In fact, dance was her saving grace.

Dance had entered Shubhada’s life when she was very young — in the form of a gift for performing well in her exams.

“When I told my parents that I want to join dance classes, they said I could do it only if I got good grades. My classes were more like a gift for me after my matriculation for getting good marks,” she says. She started learning Bharatanatyam from her neighbour.

After learning Bharatanatyam for a few years, Shubhada was introduced to Late Guru Kelucharan Mohapatra, under whose guidance she started learning Odissi. She used to practice both dance forms for some time, but later continued with Odissi only. A postgraduate in Economics, Shubhada also worked as a newscaster on television for some time and was a lecturer in R.R.Ruia College, Mumbai.

“I was doing many things, but dance was the only thing that remained with me all the time, during different phases of my life,” she adds.

For several months during her fight with cancer, Shubhada chose to keep her illness a secret. She worried that she would stop getting shows when all she wanted to do was dance. She lost all her hair due to chemotherapy and radiation. But she started to perform with a wig, hiding her illness behind her makeup and jewellery.

“During chemotherapy, your immunity level goes down and you should avoid going out. Your blood count has to come to its normal level before you can go for your next cycle. So you have to get well in that 2-3 week period. If you don’t, you have to wait. Throughout my treatment, my family’s only concern was that I should not get any kind of infection. But I had only my performances in mind. I thought this is my karma and I have to do it no matter what. That is why, with a view towards getting better soon and being able to perform, I used to follow my diet and medicine plan exactly as prescribed. I just had to keep my body fit. My mind and soul were totally focused on my art,” she says.

Today, Shubhada’s treatment is complete and her cancer has gone. While most people around her supported her through her illness, there were a few who said she would never be able to perform again. “A dancer needs a healthy mind, body and a presentable appearance – I had none at that time. But there was some energy that was pushing me forward and I had to prove those people wrong,” she adds.

Now 53, Shubhada has performed at many dance festivals in India and abroad. She has also choreographed several shows.

She teaches classical dance to children, has 25 regular students and conducts workshops at different places on a regular basis. Shubhada has authored an eBook, The Glimpse of Indian Classical Dance. She has also documented her fight with cancer in another book, Mayurpankh. Her organization, Sanskrita Foundation, is a registered cultural trust in Mumbai that offers dance lessons to underprivileged kids and collects money for cancer patients at Tata Memorial Centre.

“I also talk to these cancer patients sometimes. They feel that if I can fight the disease, they can too. Their approach towards the disease changes,” she says.

“Love and passion for your art provides hope to live. It is the hope that I want to create something beautiful that will make others happy. That hope helps a lot. I pray that everybody has some passion that can help them find that hope and fight for themselves,” concludes Shubhada.