Reliving History: The Forgotten Fort of Kavaledurga in 9 Spectacular Photographs

Did you know this fort has access to water all year long?

Kavaledurga is a hidden beauty in the Western Ghats. The place is best known for its fort which was built in the 9th century. Located in Shivamogga district, you just can’t afford to miss the serene environs of this fort. The fort has seven water bodies and access to water all year long.

A heritage destination in the Western Ghats This section of the Western Ghats, rising between the coastal region of Malnad and inland Karnataka, is dotted with small hamlets blessed with pleasant weather all year round, except for when it rains without mercy. The nondescript settlement of Thirthahalli harbors a well-guarded secret of the remains of a hill fort near the village of Kavaledurga, located around 16 km from the town. Accessible by a bridle path, threading a soothing country landscape of bright green paddy fields bordered by still lakes, this erstwhile stronghold of the Keladi Nayakas fights a valiant battle with the persistent jungle.

Kavaledurga Fort – The desire of many rulers Deep in the belly of the jungle and surrounded by rolling hills, the fort would have provided an excellent natural defense to its occupants and a major challenge to an aggressor. Over the centuries, many rulers acknowledged its strategic location – the Belagutti king Cheluvarangappa in the 14th century, the renowned ruler Venkatappa Nayaka from Keladi in the 17th century, and finally Hyder Ali and Tipu Sultan – and strived to maintain control over this important bastion in the ghats. Even today, a visitor walking the inclined trail to the fort is suddenly confronted with massive gates that rise out of the thick forest around. The futility of human ambitions is evident at the Kavaledurga Fort – where sordid walls surrender to relentless grass, kunds (tanks), that would have been perennial sources of water, are neglected amidst overgrown shrubs, Nagi sculptures lie neglected on the hill slopes, and the remnants of a glorious past struggle to prevent from falling into the bowels of oblivion. The lonesome gateways that once echoed with the clatter of horses have been infected with a deafening silence, the guard rooms sanitised of their human connection and consigned to desolation.

Climbing to the belly of Kavaledurga Fort The fort encompasses a considerable area that can be visualised as five steps accessible by a pathway, passing through five gates, that would have been heavily fortified to inflict maximum damage on the attacker. Entering the first doorway, one encounters worn out carvings, remains of a temple, crumbling bastions and idle gun-slits. Winding upwards on the hill slope is a stone paved path that skirts dilapidated guard quarters and climbs past the second, third, and fourth gate, to the arrive at ruins of what would have been the primary section of the fort. 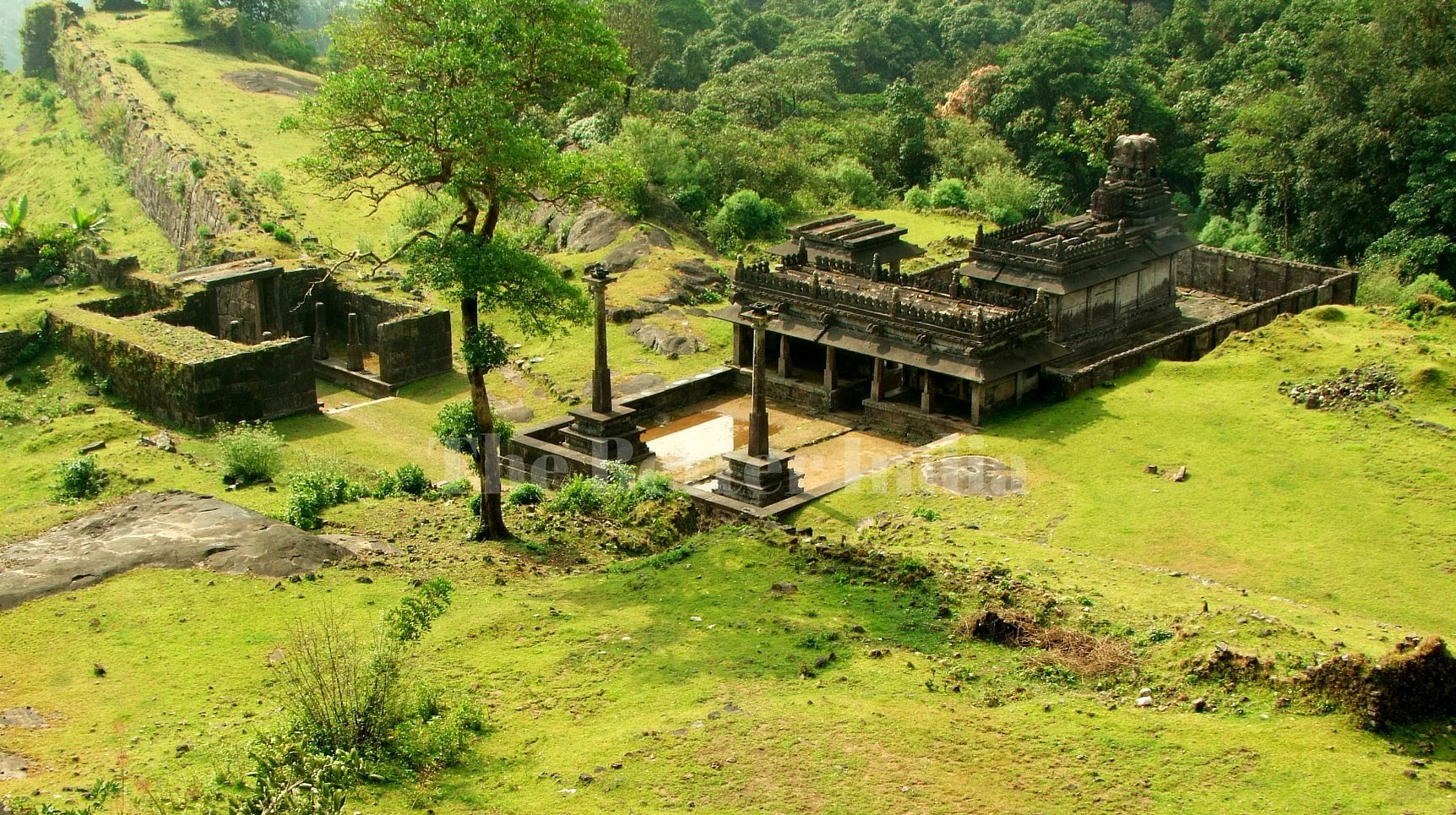 The fourth gate of the Kavaledurga Fort opens into a wide field dotted with numerous ruins of which the Kashi Vishwanath Temple still retains its magnificence. Two towering pillars stand stoically in its courtyard leading to the temple that showcases the brilliance of temple architecture, during the reign of the Keladi kings. Displaying simplicity and grace in execution and ornamentation, the temple has carvings of armed warriors, three-headed birds, snakes, the sun, the moon, and elephants on the outer wall. Perched on a weathered rock and facing the Kashi Vishwanath Temple is a small shrine known as the Lakshminarayana Temple. From here, one can relish the outstanding view of the Kashi Vishwanath Temple and the fort walls, stretching out like arms holding bastions in their fists, with a backdrop of gentle undulating hills peppered with small ponds. The view is particularly scintillating during the monsoons when the scenery is painted green and mist roams freely. However, one must be wary of squirmy leeches that thrive in the rainy season.

Relics of a forgotten era Leaving behind the temple complex and walking towards the summit, one comes across a couple of stepped wells carved on the hill slopes. Stone artifacts lie scattered on the ground – a statue of Nandi presumably from the temple, a broken tub and several utility items carved out of stone. As one climbs higher, the presence of the jungle becomes stark, with the pathway also disappearing beneath a carpet of grass, until one comes across the ruins of the palace.

Ruins of a palace in the fort Recent excavations have unearthed the ruins of a palace in the fort. Though only the plinth survives, it nevertheless provides an idea of the layout as one can identify the main hall where court must have been held, a bathroom, and the kitchen where elaborate meals would have been prepared for royalty. Several pillars that would have supported the palace now rest on the plinth, seemingly lost without the superstructure. Behind the palace a stepwell with a peculiar T-shape also survives – a testament to the water storage and management techniques used in the olden days.

Backwaters of the Varahi Dam Beyond the ruins of the palace, the jungle reigns supreme, save for some fort walls and gateways entangled in the grip of vines and creepers. A pleasant surprise awaits the one who takes the trouble to trek to the summit. To the west and spread over a large expanse are the backwaters of the Varahi Dam, inundating heavily forested lands that have transformed into islands, jutting out from the massive stretch of water.

How to get there

The village of Kavaledurga is around 16 km from the town of Thirthahalli located on the Shivamogga-Udupi highway and frequent buses are available from Shivamogga, which is also the nearest railway station to Thirthahalli. The bus frequency from Thirthahalli to Kavaledurga is very limited and hiring a taxi would be more convenient.

Kavaledurga does not have any options for accommodation and visitors can stay in Thirthahalli, Shivamogga or Agumbe and plan a day trip to the fort.

One must carry snacks and water for the trek.

About the Author & Photographer: An engineer by profession, Deeptangan likes to explore India, meet its people, savour its cuisines, climb its mountains and sail down its rivers. Born and brought up in the shadow of the Great Himalayas, he reveres the mighty mountains as the temples where he has been educated. When not writing code, he is trekking in the Himalayas and the Western Ghats, writing, reading books and enjoying music.