Many street children in India do not even know the date on which they were born. But one man in Delhi had an idea as to how their birthdays could be celebrated. And he’s inspired over 2,000 more people to do the same. This is his story of spreading joy, smiles, and birthday cakes.

Many street children in India do not even know the date on which they were born. But one man in Delhi had an idea as to how their birthdays could be celebrated. And he’s inspired over 2,000 more people to do the same. This is his story of spreading joy, smiles, and birthday cakes.

It was a normal working day for Avijit Bajpai, a 31-year-old marketing professional from Delhi, as he drove to office one day in July last year.

“I stopped at a signal and some kids knocked on my car window asking for money. There were some other kids with them and I saw that they were playing with discarded birthday party materials like an empty cake box, caps, plastic knife, etc. Someone must have thrown those things and these kids picked them up to celebrate a makeshift birthday…no cake, nothing,” remembers Avijit.

After this, the signal turned green – the kids went back to the roadside, waiting for it to turn red again so they could resume begging, and everyone went on with their lives. But Avijit could not get the image of kids celebrating a fake birthday party with things collected from the garbage out of his head.

He thought about it all the way while driving, and by the time he reached his office, an idea was brewing in his head.

“It was simple. I wanted to spend some time with street children like the ones I saw, and spread smiles in the process,” he says.

You May Also Like: Garage Sales, Lemonade Stands & More: This 12-Year-Old Is Helping the Society in Inspiring Ways

So he went ahead and posted a tweet saying he wanted to celebrate birthday parties with needy children from the slums of Delhi. The tweet evoked a big response – with many people tweeting back that they too would be interested in doing something similar. Avijit then formed a Facebook group of people who wanted to join him and named it Happy Birthday Bharat.

Their first event took place in the last week of July, 2015. The group had about 50 people by then, and around 15 of them, including Avijit, gathered in Connaught Place (CP) one Sunday.

“All of us just went to CP and we were very confused about what to do and how to do it.” The first big challenge was how to fund the birthday party that they were planning to throw. “We decided we would pitch in with equal contributions and go ahead with whatever amount gets collected. Each of us put in about Rs. 500-600, and the accumulated sum was enough for our first party with about 15-20 kids,” recalls Avijit.

Like always, CP had a lot of street children. Some were begging and some were selling things like pens, toys, etc. The first thing the team did was to buy everything that a couple of kids were selling, so they would be free from the day’s labour. Since most children had no idea about their birthdays, two of the youngest kids from the gathering of about 20 were selected, a boy and a girl, and it was decided that their birthdays would be celebrated.

In a park, the kids were welcomed with a cake, some colourful birthday caps, colouring books, jigsaw puzzles, and music.

And from here on, the party, so to speak, has continued.

According to Avijit, Happy Birthday Bharat is not an organization. It is a citizen initiative and does not have any formal structure of operation as of now.

Today, the group has more than 2,200 active members on Facebook and birthday parties for over 200 children have already been organized in 10 different cities, including Mumbai, Bengaluru and Pune.

Many people who are not even a part of the group, but like the idea, are also going ahead and organizing parties in their own way. In Delhi itself, parties have been organized about 10 times in different areas like CP, Gurgaon Sector 14 market, Noida Sector 18 market, Kamla Nagar, on the premises of an organization called ‘Can Kids…Kids Can,’ which is a hostel for underprivileged children fighting cancer, etc.

You May Also Like: This NGO is Motivating Slum Kids to Stay in School By Naming Alleys and Streets After Them

These birthday parties are not just about a cake-cutting ceremony. They are real parties, the kind that the kids watch on TV or witness being celebrated in the homes where they go to work. Every Wednesday, people from different cities coordinate on the Happy Birthday Bharat Facebook page to check who is in which area and how many people can come together for a party at a particular location. They then chip in financially. The parties have activities like story telling, quizzes with chocolates as prizes, jigsaw puzzles for the kids to solve, lots of music, and dancing. The cake always has ‘Bharat’ written on it, and the venue is never fixed. They go to places like parks, restaurants, malls, or empty spaces on the roadside. When it comes to gifts, everyone attending the party gets one, and sometimes the gifts are selected by the kids themselves.

They get slippers/shoes, books, watches, clothes, toys, and more.

“During one celebration, the parents of a kid were also there. When we asked them what they wanted for a gift, they asked for a week’s rations. So we bought this for them,” informs Avijit.

As for the funds, everyone chips in, and Avijit refuses to take help from different organizations or individuals who are willing to offer money. “I refuse because all I actually want to do is spend time with these kids. Chipping in with Rs. 500-1,000 in a month is more like giving up on just a movie ticket for most of us.”

But for these street kids, who are not even sure where their next meal in the day is coming from, is a birthday party once in a while enough? What is the larger purpose of this initiative?

“My initial idea was very basic – of some people going to the market, meeting these kids, and spending time with them. But as I saw the traction, and heard stories of these kids, I am now thinking of expanding this into something bigger,” says Avijit, who has heard many heart breaking accounts of the challenges these children face. 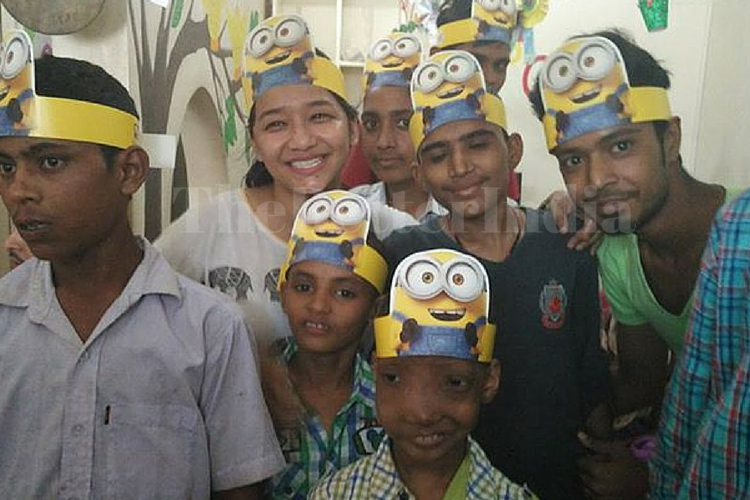 In their first birthday party in CP, when Avijit asked young Ashila’s mother why she did not send her daughter to school, saying that they would be willing to take care of all the expenses involved, she just told them that begging was a family tradition. She did it, her father did it, and now her daughter would do it too.

He once met a kid who polishes shoes in Gurgaon and all that he wanted as a birthday gift was school admission for his sister. Unfortunately, when the team tried to spot him during their next visit, they could not find the boy. Keeping such stories in mind, and the fact that they are all working professionals and will not be able to do follow-ups, Avijit is now looking at collaborating with different NGOs working in various fields, which can keep track of these children and work with them.

While Happy Birthday Bharat may have been his brainchild, Avijit believes all the people involved are owners in this initiative – Kunal Bauva and Hardik Joshi from Mumbai, Premlata Rai, Arun P Khot, Gulshan Perrera, and Nikhil from Delhi, and many others in the 2,000+ strong team.

“People are very motivated about this initiative. Some volunteers even take their families to meet the kids and have a good time with them,” concludes Avijit.

You can know more about the group here.

You May Also Like: This American Helps Street Children in Pune Live a Life They Could Only Dream Of